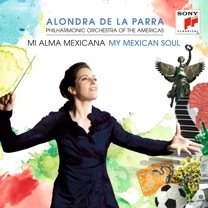 Mi Alma Mexicana abounds in revelations. That its all-Mexican classic repertoire, which ranges from sedate, 120-year-old, European-influenced salon music to uncommonly savage modern fare, arrives with such wide-eyed freshness and power owes as much to the abundant gifts of 29-year-old conductor Alondra de la Parra as to the artistry of the young members of her 6-year-old Philharmonic Orchestra of the Americas (POA).

De la Parra, who holds the distinction of being the first female conductor from Mexico to conduct in New York City, chose the 13 works on the program after spending two years researching Mexican music of the last two centuries. Much of what she uncovered is as new to our ears as it was to hers. The two-CD set, released worldwide by Sony on August 3, commemorates the bicentennial of Mexican independence.

“Of the 13 pieces,” she explained in a recent phone interview, “there are four best-sellers that everyone knows. These include Moncayo’s Huapango, Márquez’ Danzón 2, the Rosas, and Revueltas’ Sensemayá. The rest is quite new to everyone except the scholars who manage the archives. Even connoisseurs and professional musicians may not be aware of half the CD. I didn’t know the pieces existed, and I’m a Mexican conductor!”


Let’s start with the arrangement of Juventino Rosas’ Sobre las olas (1884). Who woulda thunk that this carousel-type waltz, which I always knew as the song When You Are in Love, It’s the Loveliest Time of the Year, was Mexican? Although it sounds as Mexican as My Yiddische Mama, it’s no more confounding than Gustavo E. Campa’s Mélodie pour violin et orchestre, Op. 1 (1890), which wins the prize for European-sounding sentimental fare suited for gaslit salons. The contrast with José Pablo Moncayo’s Huapango (1941), which abounds in quintessentially Mexican verve and color, could not be greater.

Recounting all the pieces on the CD will rob you of the joy of discovery. One of the gems, from 2006, is jazz-influenced, while others serve as reminders that Stravinsky once walked the earth. But it’s doubtful that he ever attended a Mexican soccer match, or knew all the authentic cheers that are ingeniously worked into Enrico Chapela’s fabulous ínguesu. You may not know them, either, but the percussion and effects will nonetheless slam into your gut with savage intensity.

Reviewing from a prerelease pressing, which lacks some of the air and color I hope to find on the final release, I am nonetheless swept away by the breadth and richness of this music. Suppressing a wry smile as I am seduced by Campa’s sensual charm, all the while knowing that it paves the way for Revueltas’ near-phantasmagoric ritualistic passion, I urge you to buy the recording and hear for yourself. Even before it’s available, hasten to Dolores Park in San Francisco early on July 25, when de la Parra and the San Francisco Symphony play three of the works at the start of their free 2 p.m. Mexican bicentennial tribute concert.