Lou Harrison’s In Honor of the Divine Mr. Handel made me smile immediately, and made my friend give a little wiggle of enjoyment. It is a true duet, written for Javanese gamelan and harp, and drawing from Handel’s Harp Concerto. Gamelan, an Indonesian orchestra that consists of mainly metal percussion instruments, is thought of as one instrument, though it is played by many people. Harrison spent many years studying Indonesian music, and even built his own version of a gamelan. The depth of his knowledge of the forms and practices of gamelan was clear. His music for it felt like a true unit, its own organism alongside and equal to the harp.

It was like the music of a tree covered in orchids, singing in the wind with a single satisfied parrot. Well, if this tropical tree and bird really loved Handel.

April 9 at the MicroFest Records release party in the Monk Space production warehouse, the second half of the program was made up of two of Harrison’s pieces for gamelan and solo Western Classical instrument, followed by two of Bill Alves’s pieces written for the Harvey Mudd College American Gamelan, which was playing. Harpist Alison Bjorkedal’s playing delightfully buzzed against the specially-tuned gamelan, and Alves mirrored Harrison’s Ladrang Epikuros with another work for violin and gamelan — Gending Sycamore Canyon — both played with grace by Lyris Quartet’s Shalini Vijayan.

Lou Harrison’s work is not new, but his lightness of tone remains singular, acting either as a point of contrast on programs, or as a mast to gather around, as it did at last night. I appreciated the range of atmosphere from open and contemplative to uncut happiness. It is a stratum of emotions that goes largely unaccounted for in the 20th-century canon.

And where lightness and happiness make camp, comedy follows close behind. I had the most fun listening to Tom Johnson’s bass solo Failing and Peter Yates’s Two Quips for singer and microtonal guitar. Both are great examples of composers doing stand-up on the sly. In Failing, the player, here bassist Tom Peters, is meant to read a complex text about a number of conundrums posed by the piece itself, all while playing increasingly high-flung twisty melodies. Within the last minute, the player is faced with the ultimate challenge — improvising speech while still playing, and trying to make it impossible for the audience to know where the given text ended and the improvisation began. It was cutely obvious where the split happened, Peters sheepishly name-dropping the concert’s organizers, “um”-ing and “err”-ing a few times. He failed, but, I’m sure he will be glad to know that. 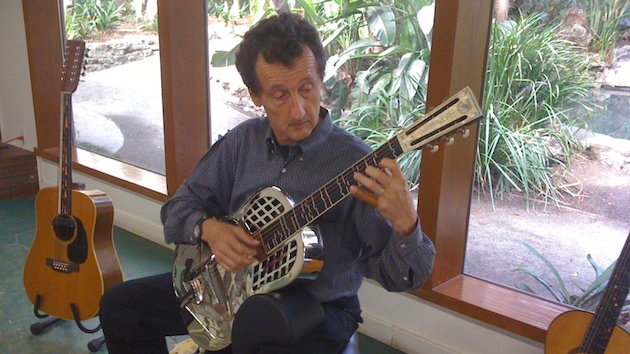 Peter Yates’s Two Quips was part of a set played by one of MicroFest’s founders, guitarist and producer John Schneider. It was during this set that the wind really picked up, battering the roof of the garage-like space, adding to the feeling of these quiet, spacious pieces. For this set, Schneider drew from his album Just National Guitar, which features a piece written for a guitar originally created for Lou Harrison’s last guitar piece, Scenes from Nek Chand, a microtonally fretted National Resophonic Tricone guitar. With the violent wind, the room felt like the inside of that weird metal guitar, each of the three pieces humming peacefully around, all fittingly small in their tasks, and large in their successes.

Somewhat outside of this peaceful Harrison-halo were two recent pieces by Veronika Krausas and Alex Miller, written for MicroFest’s other founder, pianist Aron Kallay, as a part of his ongoing project commissioning works for programmable microtonal keyboard. Krausas’s piece, Tercos, was balanced as it slithered, written for a keyboard tuned in the Pythagorean system. In this ancient tuning system, all the thirds are slightly different in personality — some bright, some dark — and Krausas leaned into that characteristic, timing the relief of a beautiful perfect fifth with discretion. It was restless, yet with a clear, premeditated form. The title of Miller’s piece describes its effects well, The Blur of Time and Memory. Think a cross between Jefferson Airplane’s White Rabbit and, what the heck, Lou Harrison.