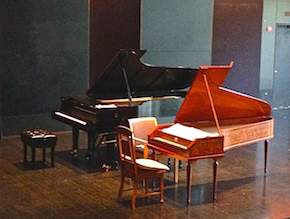 In the piano repertoire, technical creativity in design of the instrument has as much to do with its musical charms as do the talents of composers and performers. The significance of that was a thread woven through a smartly conceived, brilliantly performed concert by pianist Eric Zivian at the Mondavi Center Vanderhoef Theatre Sunday evening.

In the concert, Zivian paired a fortepiano from the 1790s with a Steinway grand, on the same stage. Seeing the two side by side begged the notion that this might be more history lesson than concert. The opposite was true.

This was the latest offering by the Keyboard Festival, mounted by UC Davis’ music department, and it was likely its highlight for the way that Zivian combined artistry and stamina during the performance of nine works from various eras, ranging from C.P.E. Bach to the modern day.

Zivian was joined by cellist Tanya Tompkins on two sonatas in this concert. These two musicians have been long-time and frequent collaborators, and Sunday’s concert proved that the two have forged a solid, beautiful musical friendship as chamber musicians.

The evening’s program followed a chronological sequence, with Zivian performing on a Poletti fortepiano. The instrument was built as a copy of a Dulcken piano, from 1795. This fortepiano, tuned to 430 Hz, offered an arrangement of pedals placed directly under the piano frame, to be operated by the player by lifting the knees.

Zivian professed his interest in performing works written for the instrument, and in that vein he opened the concert with a tentative performance of C.P.E. Bach’s Sonata in A Minor. Haydn’s Sonata in C Major, Op. 79, followed; here Zivian hit his stride, conveying the wayward charm of this late Haydn sonata, whose second movement makes good use of bass notes and a cascading sense of musical energy.

In structuring his program Zivian also revealed an interest in making links between composers. C.P.E. Bach (J.S. Bach’s second surviving son) influenced Haydn, and so it was only natural that Beethoven should follow Haydn as the next composer on the program.

These two musicians have been long-time and frequent collaborators, and Sunday’s concert proved that the two have forged a solid, beautiful musical friendship as chamber musicians.

Zivian performed nine of Beethoven’s bagatelles and honored them by playing with clarity and seizing on the unexpected dramatic power of these short works whose modern significance bleeds in everywhere.

He closed the first half of the evening with Beethoven’s Sonata in C Major, No. 2, for cello and piano. Tomkins, her Baroque bow in hand, boldly played the cello, her bowing as sensual as it was urgent. On the piano the music sounded as if Beethoven’s musical ideas had already outgrown the limitations of the fortepiano.

The fortepiano was dispatched for the second half of the concert, whose music jumped a century ahead, with Debussy’s Étude XI pour les Arpeges composes. In étude XI, Zivian was deft at using dampers to shape each note.

An emphasis on Debussy in the second half of the program proved an interesting choice. Rather than beginning with more Beethoven, to make a point, Zivian chose to sell the idea that the modern piano allowed composers a certain emotive and painterly quality, and that French composers like Debussy and Ravel were the ones who seized on that idea.

Zivian chose to sell the idea that the modern piano allowed composers a certain emotive and painterly quality.

After the Beethoven, Zivian fast-forwarded another hundred years, to the present, with a performance of two of his own études (2001). The first saw bass notes and chords at odds with the higher registers, with Zivian using the middle pedal to great effect. The second étude sought to shape each note as separate from the next — not an easy thing to do in this staccato piece, which might have sounded like something from the pen of Conlon Nancarrow had the rate been slowed down a fraction.

Then Tomkins returned to the stage, this time with a modern bow, for the evening’s highlight: Debussy’s Sonata for Cello and Piano. Here the audience was thrown headlong into the maelstrom of the 20th century. The spare aspect of the piano in this work allowed Tomkins’ musical charms to bloom, especially in the final movement, where runs from the top of the neck to the bottom were tackled with surety — each note radiant, resplendent, and clear.

The three works that followed were based on water themes. The first two were Ravel works — the “Ondine” from Debussy’s Preludes, Book II, and “Ondine” from Gaspard de la Nuit. Zivian bewitched his audience with the finery in his playing here, never letting the Steinway get out of control. The evening ended with Debussy’s L’Isle joyeuse.

At concert’s end, it all felt that the audience had been treated to an impressive, yet totally unassuming, musical history lesson. Yet it was more than that. This was a story about what an instrument, and the technical evolutions therein, can do to the musical soul. In that, the artistry of Messrs. Dulcken, Poletti, and Steinway were as much present as that of Mr. Zivian and Ms. Tomkins.