ike a dreamer paralyzed in a nightmare, unable to move or speak, Fritz Lang's legendary silent film, Metropolis, soundlessly screams for help from an accompanying musical score. Indeed, when the film was first released in Germany's Weimar Republic of the late 1920s, an original score was composed to circulate alongside it. As viewers watched it in theaters, live orchestras would have performed the music.

But on Friday evening, during an outdoor screening of Metropolis at the Montalvo Center for the Arts in Saratoga, the Club Foot Orchestra performed a different score, which Richard Marriott, in addition to several of Club Foot’s members, collaboratively composed. The result is a lively, modern, and inventive presentation of this classic film.

When Marriott founded the Club Foot Orchestra in 1983, initially the ensemble performed in nightclubs around the Bay Area. Eventually, Marriott experimented with adding visual components to Club Foot’s performances. His experiments led to the group's work with silent films from the 1920s, including Rupert Julian’s Phantom of the Opera, Georg Wilhelm Pabst’s Pandora’s Box, and The Cabinet of Dr. Caligari, directed by Robert Wiene. 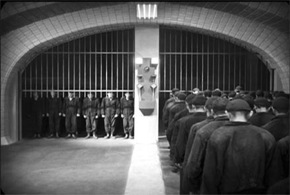 Lang’s Metropolis, a monumental work of science fiction, critiques capitalism while warning about the dangers of fetishizing modern technology. In the film, oppressed workers literally toil underground, whereas a privileged, monied class luxuriates high in the sky, amid the Art Deco skyscrapers of some futuristic city. Predictably, perhaps, the son of the city’s ruler falls in love with a charismatic worker. After a mad scientist crafts an uncanny, robotic Doppelgänger of the beautiful female worker (played by Brigitte Helm), mass destruction ensues. Ultimately, though, the film concludes on a tentatively optimistic note about the power of love to reconcile, mediate, and unite.

Club Foot’s music differs from the original score, which was composed by Gottfried Huppertz, and which can be heard today on remastered DVDs of Metropolis. That score illustrates several musical characteristics of its historical era. In fact, its different musical styles sharpen the film’s contrast between the wealthy and the working classes. Whereas lush, post-Wagnerian sounds typically accompany the privileged characters, Huppertz uses a far more restrained style to depict the workers and their machines. This latter style evokes the concept Neue Sachlichkeit (New Objectivity), which is associated with art, including music, of the Weimar Republic. 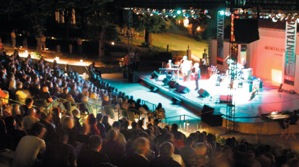 Maybe the greatest similarity between that score and the new one created by Marriott and Club Foot, therefore, are that both whirl together numerous musical styles. Club Foot, which performed on Friday with nine players plus a conductor, consisted of a single violinist, a handful of wind and brass players who can double on various instruments, two guitarists, and a single percussionist. Their pastiche of idioms for Metropolis included soulful violin elegies, music for small jazz combo, electronic music, military marches, quasi-minimalistic rhythmic ostinati, café music, and more.

Club Foot’s music supports these silent films in two ways. First, the musicans create sound effects for the action in ways that are often comic. For example, a short, Felix the Cat cartoon preceeded Metropolis. The whole audience laughed when a well-timed percussive splat highlighted Felix’s front-faced fall off a sidewalk. Second, and more importantly, Club Foot’s music conveys — in fact, it helps to create — the meaning and emotion of the drama.

One might expect for this contemporary, even postmodern ensemble to seem incongruent with Lang’s old, modern classic of a film. But I was struck by how seamlessly Club Foot meshed with Metropolis. Whether the two work well together because Lang’s film is timeless, or instead because Club Foot makes it timely, remains unknown to me.

Either way, though, by this performance underneath Saratoga’s starry sky, I was surely engrossed.