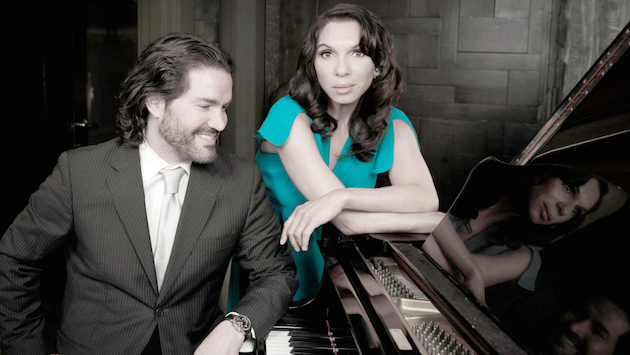 As a performing duo pianist Lara Downes and cellist Zuill Bailey are clearly in the midst of a beautiful musical friendship. And its a personal one, too. That was easily gleaned once they addressed the audience to introduce the program — the two like to finish each other's sentences.

That melding of minds and personality played just as well in the musical realm, and on Friday evening at the Mondavi Center these two musicians had a goal of bring American music from the 20th century alive to an audience.

The 20th-century American music is of the Barber, not Babbit, kind. It is the bold and tonal music of a nation on the rise, and one in search of a classical music identity.

In doing so, Downes and Bailey performed a winsome program of transcriptions of works by Leonard Bernstein, Aaron Copland, Lukas Foss, and Barber. The works performed come as an aftermath to their Some Other Time CD release last April.

Lara Downes, pianist-in-residence at the Mondavi Center, is a savvy presenter who knows the appeal of this music and that curating it is as just as important as presenting it. Friday's concert at the Mondavi's intimate Studio Theatre was an elegant example of how accessibility and a breezy relevance can exist, organically, in a classical music concert.

Both Downes and Bailey affected a fetching bedside manner on stage as they introduced the evening's music — not that they needed to sell any of the works to the audience — some of whom undoubtedly may have watched Leonard Bernstein's Young People's Concerts on network television, between 1962-1972.

With the idea of relevance sold, it came down to the music. No problem there — Bailey and Downes paid this music a complement by showcasing its urbanity and the bright hopefulness within.

The concert began with the transcriptions of works by Bernstein — his "In Our Time" and "Some Other Time" from On the Town, and "Dream With Me" from Peter Pan. These were shimmering, bright and jazzy pieces, rarely performed on the cello.

Next came a transcription for cello and piano of Bernstein's Sonata for Clarinet and Piano, from 1941. The performance spoke volumes for how well these two musicians play together. The piece, written a year before Bernstein would tackle writing the score to West Side Story, revealed flashes of that great musical score.

It was with this sonata that Bailey's bold sound started to bloom. The two musicians were deft at handling the many mood swings in the work. They smartly mined the classical populist sound, while honoring its concert hall gravitas.

There were some minatures performed throughout the evening that included a curious transcription of Copland Simple Gifts and a Downes' delectable performance of 7 Anniversaries: No. 1 For Aaron Copland, also by Bernstein.

The highlight of the evening was the Sonata for Cello and Piano, Op. 6 by Barber. The work is a showcase for the cellist. From the dusky tones that open the work to its bold ending — it offers a broad landscape for expression.

The El Paso, Texas-based Bailey left no doubt that he is up to selling the Brahmsian weight of this three movement work. Bailey's cello sound produces the darkest overtones. It's an expansive and precise sound. At times, Bailey's runs up and down the neck of the cello sounded liquid and effortless. Downes and Bailey imprinted a warm radiance to the sonata.

Barber wrote the work in 1932 when he was a student at the Curtis Institute. Chronologically, it was the oldest piece performed Friday evening; it was also the most musically adventurous.

The sonata is the work that brought these two musicians together. Their affinity for this music was clearly evident in the performance and in the chatter between pieces, which was never pedantic or calculating.