What repertoire staple could get Symphony Silicon Valley to give four performances instead of its usual two or three? Beethoven’s Ninth Symphony, of course. And as soon as Scott Bearden stood up to deliver his opening solo in the fourth movement, “O Freunde, nicht diese Töne!” on Saturday evening, it was clear why San Jose’s California Theatre was full. He sang with as much power and clarity of articulation as the finest bass-baritone in the world. It was a truly thrilling moment in a generally exciting evening.
Bearden shared the stage with other good singers. Noel Espíritu Velasco has a clear deep tenor, and enough voice to be heard over the chorus in his solo. Together with soprano Barbara Quintiliani and mezzo-soprano Gigi Mitchell Velasco, they made a fine quartet, voices weaving around each other. The SSV Chorale, directed by Elena Sharkova, and required by Beethoven to squeak at the top of their lungs, sounded a little off-balance at moments but projected their joy and enthusiasm well from the back of the stage.

But before anyone sings, the Ninth is three-plus long movements of pure orchestral music. And if that’s a slog, the audience won’t care by the time the vocal “Ode to Joy” turns up. SSV has a knack for rising to the challenge on particularly grand occasions, like this one. It gave not a revelatory reinventing interpretation nor even one with particular dazzle, but a solid, involving performance under the cool, clear beat of guest conductor Fabio Mechetti. 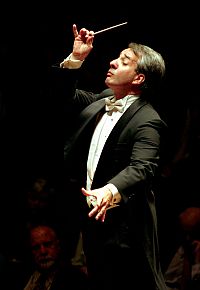 Tempos were generally slow, but forward motion was never lost. Even the Adagio molto third movement never seemed to wander. Tight, short-breathed phrasing, never sinking into slurs, was of particular help here. Mecchetti was especially careful moving into and out of the sudden slackenings of tension that Beethoven places near the end of the “Ode to Joy.”
Sharing the Load
The players responded with color and vigor to this direction. We heard mysterious, twangy rumblings from the cellos at the start of the first movement. Strong work from the violas and second violins playing together, as Beethoven often asks them to do here, matched the strength and tone of the first violins. The wind section was so perfectly together it was like an organ chorale, especially delicious in the sudden cutoff at the very end of the scherzo. The French horns had more difficulty, but not enough to disturb the general quality, and they delivered good playing in spots in the third and fourth movements.

For all its magnitude, Beethoven’s Ninth is not quite long enough to make a full concert. So it was preceded on the program by a 15-minute choral work by Brahms, his Song of Destiny, from 1871. Friedrich Hölderlin’s poem almost jealously describes the bliss of Elysium and then contrasts it with the anguished plight of suffering humans.

Brahms’ music makes the contrast more pointed. There’s something operatic in the way the calm, characteristic harmonies of the opening section are succeeded by thundering quavers that describe the humans, which slowly sink into resignation, followed by an orchestral coda that returns, in a new key, to the calm of the opening. The Chorale singers did not enunciate the words, but contributed excellently to the overall onrush of sound.

This clear view of Brahms’ word-painting cast new light on Beethoven’s. The text of the “Ode to Joy,” by Friedrich Schiller, deals with the same themes as Hölderlin’s, but is far more cheerful. Yet Schiller’s expression of unfettered joy is not quite undifferentiated. Listen to the slight hush Beethoven puts in at the end of the second verse, where Schiller writes of the person who has not achieved joy, and to the majestic slowness in the verse demanding worship of the Creator. Translating the emotion and meaning of a poem into music is always a challenge for composers, and it was interesting to hear, side by side, the way these two masters conveyed the meanings of their chosen poems.