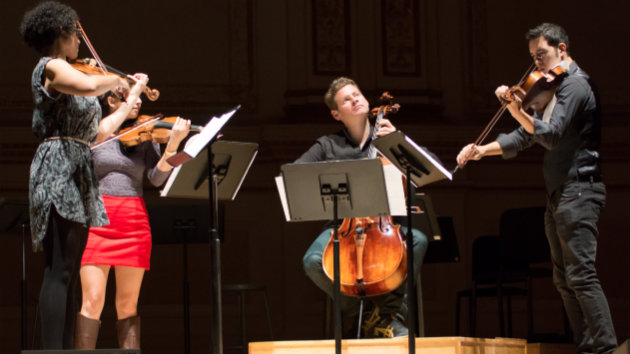 Burlingame’s swanky, century-old Kohl Mansion isn’t a venue where you would expect to hear good-old-fashioned folk music. Its oak-paneled Great Hall usually serves as a stage for the chamber music of Brahms and Beethoven. And while the Catalyst Quartet is a classical chamber ensemble, in its Nov. 15 concert members passed for country fiddlers and even a Brazilian samba band in a recital of folk-based string quartet works.

The most compelling pieces on the program were contemporary takes on non-Western folk traditions. Stirred by his encounters with violence during a trip to Israel, Argentine composer Osvaldo Golijov drew on Middle Eastern musical traditions for his 2003 Tenebrae. Parts of the work are driven by impersonal, minimalist motifs — the oscillating two-note accompaniment that spans the piece calls to mind film scores by Michael Nyman or Philip Glass. But Golijov is also capable of genuine musical pathos.

In one particularly chilling passage, violist Paul Laraia emulated a traditional, Middle Eastern lament. First violinist Karla Donhew-Perez provided a kind of echo effect at the end of each phrase, playing an obsessive melodic figure as she shifted her bowing from the bridge upward toward the fingerboard. The resulting, eerie tone color sounded like it had been produced in an electronic studio rather than by an acoustic violin.

Rodriguez seemed the most-dedicated to the program’s folk theme. In the flamenco-like section that ends the piece, he wasn’t afraid to indulge in some rough, downhome-style bowing.From the Levant, the quartet turned to North America with Canadian-based, American composer Marcus Goddard’s 2009 Allaqi. The piece incorporates elements of Inuit throat singing, a kind of performance-game in which two Inuit women face one another and produce interlocking patterns of grunts, inhalations, exhalations, and short repeating melodies — the first participant to laugh or stop is the loser. Goddard creates a convincing imitation of the vocal style in his piece, with viola and cello representing one woman and the violins another. The players conjured up the unique timbres of throat singing with their strings.

A Mephistophelean waltz, introduced three minutes into the piece, is developed in a slow middle section, with some lovely, yearning solos played by cellist Karlos Rodriguez. Rodriguez seemed the most-dedicated to the program’s folk theme. In the flamenco-like section that ends the piece, he wasn’t afraid to indulge in some rough, downhome-style bowing.

It was exactly this kind of playing that seemed missing from the quartet’s rather too-polished performance of Charles Ives’ String Quartet No. 1. Ives hoped to capture the rough-and-ready performance practices of amateur musicians — there are “wrong” notes and conflicting meters written into the Salvation Army hymns that serve as the quartet’s thematic material. The second movement conveys a kind of barn-dance feel, and there are ample opportunities to play the part of a country fiddler, but only Rodriguez seemed to pick up on this.

Yet the other members of the group were capable of getting down and dirty. In their own arrangement of Will Holt’s “Lemon Tree” (popularized by Peter, Paul & Mary), the quartet made use of Appalachian bluegrass fiddling techniques, including smacking the bow against the strings. They contrasted this with an alternate, samba arrangement of the tune, a reference to the melody’s Brazilian origins. In a clever imitation of the güiro, the players bowed behind the bridge in order to replicate the percussion instrument’s unique ratchet sound.

The quartet’s version of Joni Mitchell’s “Both Sides Now” was weighed down by an erratic stop-and-start arrangement of the melody. The variations on Pete Seeger’s “Where Have all the Flowers Gone” fared much better. In one variation, over a low pedal point in the cello, Laraia played a feeble rendition of the melody in overtones. Guest violinist Sami Merdinian (replacing usual Catalyst violinist Jessie Montgomery) provided a menacing march that seemed to overpower Laraia’s part in powerful, anti-war symbolism.

The program closed with a fine interpretation of Bedřich Smetana’s 1876 String Quartet No. 1. While the quartet is largely indebted to the classical tradition — the influence of Beethoven’s string quartets permeate the work — there is also a polka Scherzo that fit into the folk program. The players seemed to enjoy this movement the most. Still, this late-19th-century work seemed somewhat out of place with the other folk-inspired quartets — a kind of token “classical” piece to please the usual Kohl Mansion crowd.