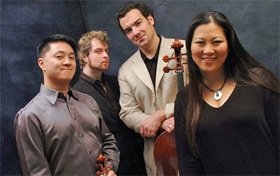 The Miró Quartet offered more than a chance to test a theory on Sunday at Kohl Mansion in Burlingame. The theory is critic Edward Said’s, that it’s meaningful to talk of “late style” commonalities among writers and composers working toward the end of their lives. It’s likely that both Beethoven and Schubert knew, as they worked on string quartets in 1825 and 1826 (at the ages of 54 and 29, respectively), that their physical maladies were likely to bring their life’s work to an end fairly soon.

Perhaps this affected their composition. Certainly, Beethoven’s Quartet in B-flat Major, Op. 130, and Schubert’s Quartet in G Major, D. 887, have much in common, some of it pointed out by Miró violist John Largess in talking to the audience at Kohl Mansion. They’re both immensely long, large-scale works that make no concessions to conventional tastes. Neither was popular when new, but both have since come to be considered masterworks. They have melodic similarities and share aspects of harmonic structure. Scholars think Schubert probably saw Beethoven’s score — though he may never have heard it performed — and was inspired by it.

Still, they’re also strikingly different pieces, each characteristic of its composer, and particularly of his late style. Schubert’s, however intense and anguished, is almost compulsively melodic throughout, and however large and spread out, it’s still in the conventional four movements of sonata form. Beethoven’s, by contrast, is crabbed and gnomic, with baffling passages that seem to lead nowhere, like a staircase in the Winchester Mystery House, alternating with tender intervals of apparent simplicity. In its original form, as the Miró Quartet played it, with the Grosse Fuge (published separately as Opus 133) as its finale, Opus 130 has the rather Mahlerian outline of a huge opening movement, an even larger and most formidable finale, and four shorter movements of varied character in between.

The Miró played both works with utmost dedication and coordination, enveloping without overwhelming the intimate space of Kohl Mansion’s hall. As I waited in the foyer before the recital began, through the hall’s closed doors came the muffled sound of the quartet practicing over and over a tricky bitonal passage from Schubert’s Andante. It sounded perfect already, and came through even better in the concert. Ensemble was spot on, and only just the tiniest touch of timing difference between Largess and first violinist Daniel Ching in one place where they play two notes together persuaded me that these musicians are merely human.

This is one of many passages where Schubert writes mostly for the four instruments playing thematically together, and I began looking forward to these, even craving them, for the ringing harmonies that would burst out from the stage. These were the result of that perfect ensemble, not only in timing but in intonation, as well. Tempo and energy, too, were impeccable. Schubert’s finale is a fast rondo that seems to go on forever, like the finale of his Great C-major Symphony. And like that one, too, it rewards a tirelessly energetic performance like this. Just at the very end, a touch of slowing down as the music gets quieter closed it off with perfection. The Miró Quartet also solved the problem of the fecklessly innocuous trio in the scherzo movement, making it coy and beautiful, with robust solos from Joshua Gindele’s cello, and keeping the energy level up by matching the trio’s slower ¾ beat to the faster one-in-a-bar beat of the surrounding scherzo.

As Schubert may have echoed Beethoven in his composition, so Beethoven — whose quartet we heard second — echoed Schubert in the performance. The Miró Quartet applied the same careful technique that served it well in Schubert’s trio to Beethoven’s third movement Andante, this time with the notable solos coming from Ching’s violin, caressing and accenting a cantabile passage. The Grosse Fuge is usually noted for its brutally rough outer sections; what was most memorable here were a glassy-smooth Meno mosso middle section and a passage of trills executed with the eerie precision of bees buzzing. Although the music was crisp, and the recollections of earlier passages that Beethoven inserts near the ends of several movements were as fiery and slashing as could be desired, the players tried to keep the main part of the fugue from being too harsh for comfort. They used a similar technique in the Danza Tedesca. Beethoven uses frequent abrupt changes in dynamics in this movement to keep the music off balance. The Miró Quartet tamped this down, and used tiny pauses and occasional ritards, like little swells in the current, to achieve the same effect.

Each player shone individually. Ching’s rather top-heavy sound stands out the most in the quartet. It served him well in Beethoven’s sudden exclamations and Schubert’s chittering finale. Second violinist Sandy Yamamoto gave a distinctively clipped approach to her solos. Largess played notably hairpin dynamic turns on his viola. And Gindele’s cello offered mostly a surprisingly affecting distant, ghostly sound, though, as I noted, he could turn robust when necessary.

This concert was a notable testimony for the case that the late style can be the most rewarding style, for players and listeners alike.