Rarely is a program so satisfying that everyone around you in the audience is smiling, nodding their heads, and purring with satisfaction. But thanks to the impeccable taste of composer pianist Jake Heggie and flutist Carol Wincenc, Monday’s Music at Meyer concert in the beautiful if problematic acoustic of Temple Emanu-El’s Meyer Sanctuary was a heart-warming success.

Save for one work, Heggie’s The Deepest Desire: Four Meditations on Love (2002), for mezzo-soprano with flute and piano accompaniment, the evening was devoted to compositions for either flute/keyboard duo or solo flute. Since the program booklet dispensed with notes (except for lyrics to Heggie’s meditations), Wincenc and Heggie introduced each work with off-the-cuff remarks. Wincenc, relaxed and refreshingly free in repartee that suggested a wee bit of on-the-road weariness, immediately helped establish the evening’s intimate tone by saying, of her first encounter with Heggie, “You know when you meet a very old soul and you connect immediately.”

The flutist was at her finest in the sublime middle movement, Largo e dolce, from Bach’s great Sonata in B Minor, BWV 1030. There, the supreme evenness and fineness of her line was as wondrous as her musicality. Elsewhere in the sonata, whose tone and feeling constantly remind Heggie of the B-minor Mass, as he noted, some of the detail in Wincenc’s remarkably expressive contrapuntal interplay with Heggie was drowned out by his assertive pianism. 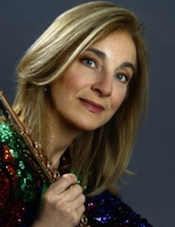 While there was never a sense that he was pounding the piano — Heggie's tone was always round, brilliant, and apt — Heggie often dominated, even with the piano lid mostly shut. Perhaps this was a result of Wincenc’s being placed far forward on the lower level of the stage, where the acoustic seems to be less resonant than farther back on the top level where Heggie was seated. It is also possible that Heggie, seated above his recital partner, could not accurately gauge volume.

While some flutists reveal a brilliant edge to their tone, Wincenc’s enviable smoothness lent an air of vulnerability to her interpretations. This worked especially well in Ernst Bloch’s Suite Modale for Flute and Piano (1956), written three years before his death, as well as in Francis Poulenc’s contemporaneous Sonata for Flute and Piano (1957), part of a trio of late works dedicated to deceased friends. Edgard Varèse’s so-called anti-flute solo, Density 21.5, on the other hand, pushed Wincenc to the absolute limits of her comfort zone.

The supreme evenness and fineness of Wincenc’s line was as wondrous as her musicality.

As beautifully as Wincenc played, her tone was not always pure. Even after she had addressed the “Pacific Ocean” that had clogged her flute in the Suite Modale, her tone in two solo works, the Varèse and Claude Debussy’s sensual Syrinx, was occasionally marred by extraneous sounds.

Extraneous sounds, by contrast, played an important role in The Deepest Desire. With Heggie’s piano lid fully opened, Wincenc played the opening prelude, “The Call,” leaning over the strings, exciting sympathetic resonances that brought an air of otherworldliness to Heggie’s setting of four poems by Sister Helen Prejean. This was ideal for a work that addresses Prejean’s spiritual journey and her decision to act on her “deepest desire” to fight injustice as a servant of God.

As soloist, Heggie introduced a 21-year-old vocal student, Quinn Middleman. The two first met two years ago, when Heggie was coaching students at University of Southern California during a short residency. When she sang two of the four songs from the cycle, Heggie told the audience “heard” the voice of Sister Helen. Middleman’s body filled with energy, her face and arms became remarkably expressive, and her voice rang out with beauty.

Skipping classes in order to perform in San Francisco, Middleman was a big surprise. Her initial affect seemed overly shy, reticent, and devoid of vitality until she began singing. Then, her body filled with energy, her face and arms became remarkably expressive, and her voice rang out with beauty.

Appropriate sounds of ecstasy and excitement, a delightful mock teacher-as-preacher voice when Sister Helen lectured children to be careful with fire, the sly wink, the stage presence to move forward and back with ease as a song’s energy built and ebbed, and a conclusion marked by all the simplicity, purity, and, above all, humility that one would expect from Sister Helen — all these qualities and abilities capped her remarkable performance. 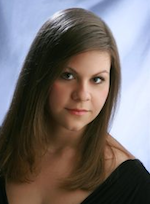 It wasn’t perfect (the occasional breathy tone, quickly corrected, marred an otherwise impeccably produced vocal line, and her strongest declarations were a mite steely), but Middleman gave strong indication that, as her voice continues to develop, we will be fortunate to hear more of her in the years ahead.

Two years after Heggie met Wincenc while playing a Classical Action concert, he wrote Fury of Light (2009) for her Ruby Anniversary celebration in New York City. Heggie expanded the flute and piano work’s initial three movements, based on the poem Sunrise by Mary Oliver, in 2010, when he added the third movement, “Meditation.”

In their definitive performance of a wonderful work that demands a recording, Heggie aptly demonstrated how his contemporaneous project of orchestrating his opera Moby-Dick and revising Three Decembers influenced three of Fury of Light’s movements.

Heggie’s playing sparkled in the brilliant first movement. Despite an almost shut piano lid, his playing sparkled in the brilliant first movement. The two artists’ sound changed dramatically with the ballad-like simplicity of the sweet second movement and the ambling progression of the meditation. A rapid romp and cute little ending provided the perfect conclusion to an exceptionally rich concert whose encore, the so-called Swingin’ Sisters Blues, for flute, oboe (Middleman) and piano, was the sweetest icing imaginable on a cake filled with delights.