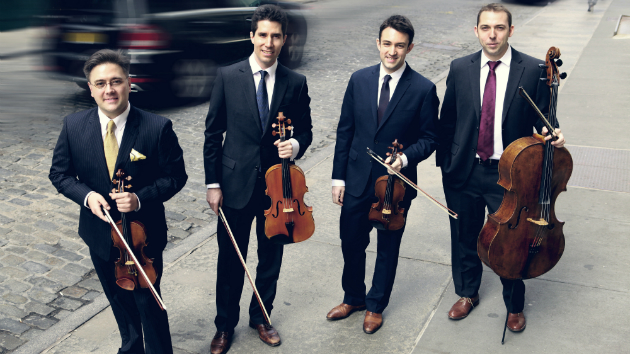 Franz Schubert is sometimes considered the fourth member of the classical "Viennese school," though he's a generation younger than Beethoven and younger still than Mozart or Haydn.  This year's [email protected] Festival is devoted to Schubert's music, and the first program, presenting his early works, showed both his roots in Mozart and the differences that set him on an openly Romantic path.

On Sunday, at Stent Family Hall on the Menlo School campus in Atherton, the Escher String Quartet began the concert with Mozart’s String Quartet in D Minor, K. 421. The seeds of Schubert’s own quartet writing can certainly be heard here.

In some of his works, especially those in the minor mode, Mozart was a Romantic composer born a little early. Within the calm strictness of high Classical style, a fervent emotionalism peeps out. That powerful churning that characterizes a Schubert work like the “Death and the Maiden” quartet (in the same key) could be heard underneath the even-paced, rhythmic, dance-like opening Allegro of this performance. The hefty jollity of the minuet also prefigured and resembled the effect of the “Death and the Maiden” scherzo.

The Escher immediately followed with Schubert’s earliest complete composition for string quartet, an Overture in C Minor, D. 8a, written at the age of 14. Not likely to be heard outside of concerts like this, it’s already characteristically Schubertian. The term “Overture” implies a heavier composition than a typical quartet opening Allegro of the time, and this one begins with a large slow introduction. Then it builds tiny motifs into a high emotional climax that cuts out for a gentler second theme, a Beethovenian procedure that Schubert was to make his own. The only problem is that the constituent material is not very good. Still, the young composer was showing his promise.

Schubert’s first published songs should have, though they didn’t quite, make him famous: “Erlkönig” and “Gretchen am Spinnrade.” Pianist Hyeyeon Park ably accompanied these.

“Gretchen” was sung by Joélle Harvey with a powerful soprano appropriate to an opera stage, or perhaps to the Menlo-Atherton Center for the Performing Arts, where the program was given on Saturday. Her voice was far too big for the tiny Stent ballroom. Nevertheless, her alternation of character between Gretchen’s despair and her yearning was clearly audible and appreciated.

Nikolay Borchev handled the multiple voices in “Erlkönig” well. Though he effectively dramatized the song throughout, the most impressive part of Borchev’s performance was the bug-eyed display he put on for the Elf-King, with an eerie, seductive voice, light and spooky. No listener could doubt the malevolent intent, nor the sincerity.

After intermission, the “Trout” Quintet – from a 22-year-old Schubert – was prefaced with Harvey performing the song, “Die Forelle,” the tune of which provides the theme for the quintet’s variation movement.

Patrick Castillo’s program note aptly cites affability as the dominant characteristic of the “Trout” Quintet. That was apparent in this performance, which made its way genially through the five movements. Pianist Jeffrey Kahane’s work was distinct for its dominance and clarity. Violinist Arnaud Sussmann, though a bit short-breathed in his phrasing in the opening, quickly merged with the rest.

The most striking sound of the concert came in duos of the lower strings. Keith Robinson’s cello was quiet and inconspicuous by itself. Playing together with Sunmi Chang’s viola, however, the two instruments made a strong, penetrating tone. Cello pairings with Scott Pingel’s bass were even more surprising, jumping out palpably.

This concert made a good beginning. I can’t wait to hear what Schubert writes next.