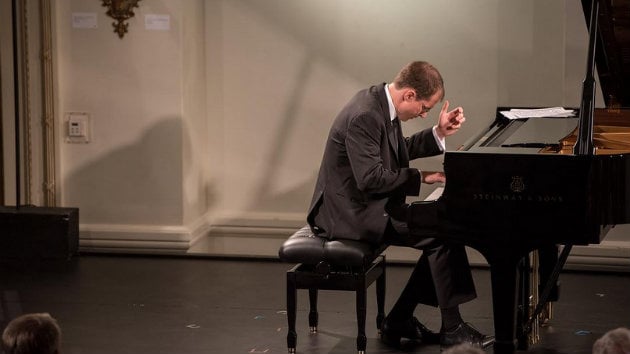 Schubertiades should be festive occasions. [email protected]’s third Schubertiade on Tuesday at the Menlo School’s Stent Family Hall was graced by an intermission reception featuring complimentary wines and chocolates. The tiny bite-sized cheesecakes with dollops of chocolate on top were an especially happy addition. The music, on the other hand, was anything but cheerful.

Despite the joys of friendship, Schubert lived a tragic life, and his unhappiness is reflected in some dour, even morbid music. Because it’s Schubert, though, it’s great and profoundly morbid music. Enjoyable performances by baritone Nikolay Borchev, pianist Gilles Vonsattel, and the Escher String Quartet resulted in a rewarding program.

Borchev gave calm, sepulchral performances of two songs in which a friendly Death welcomes a suicidal youth and an anxious maiden to his embraces. The piano part of the second song reappears in the work that followed it, the “Death and Maiden” Quartet, as the theme for its Andante variations movement. The program was completed with the Piano Sonata in C Minor, D. 958, another grim and turbulent work whose thematic connection with Death is Schubert’s own death two months after composing it.

Vonsattel hunched closely over the piano while playing the sonata, shaking his head with the intensity of his concentration. He played it slowly and with consummate sobriety. Bells seemed to toll and characters conversed in melodies of different registers. The fast and lively sections also connected to the serious drama of the music. In Schubert, even the darkest and moodiest works aren’t entirely devoid of light and gentle melodies.

The “Death and the Maiden” Quartet displayed even more shades of gradation. Adam Barnett-Hart’s first violin seemed to show the most humane, inviting, and gentle character. He just gently touched some of the high notes in the more impassioned passages of his part. Aaron Boyd on second violin was darker and more grounded, and the intensity increased down the scale, with the most sober seriousness coming from violist Pierre Lapointe and the Quartet’s newest member, cellist Brook Speltz.

Speltz fits in well to the Escher’s character while bringing an increased flexibility to the group’s performing style. Color and emotion, not customarily the Escher strong points, were evident throughout the music. The Andante movement in particular brought tender spots to some of the variations. Anger and gentility alternated.

In many performances of “Death and the Maiden,” the scherzo and finale are lighter and quicker than the earlier movements.  Here they carried a similar heft. They were brisk, yet deliberative. This was, overall, a thoughtful performance of the work, which provided its varieties of style within an overall sober and deliberative performance.

Between them, the Escher Quartet and Vonsattel demonstrated that the darkest and even grimmest music can be richly rewarding, even positively enjoyable, to listen to. At least, it can be true if that music is by Schubert, a composer who fearlessly pursues both beauty and meaning even in the face of Death.