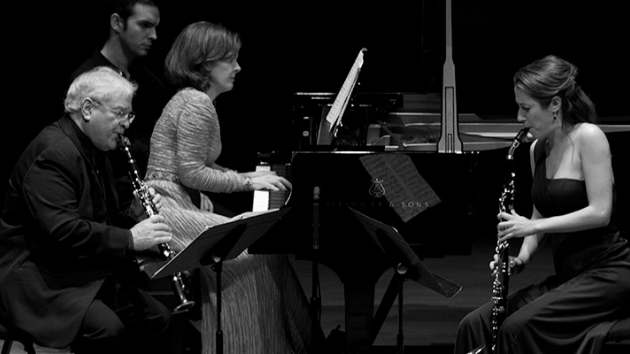 For its final concert of the winter season, [email protected] put on a “Clarinet Celebration” on Sunday at the Menlo-Atherton Center for the Performing Arts. All seven works on the program were lively and cheerful, the perfect repertoire for a miniature festival, and the performers were determined to do them all justice.

The star of the show was Romie de Guise-Langlois, a clarinetist from Quebec who first appeared at Menlo in 2012. A slight woman in a striking green dress, she played with a conscientious air. Occasionally her instrument would emit a few sounds that I’m not sure were intended. Generally, though, the fluidity and grace of her work were outstanding.

One of these trios was Bartók’s unsubtly-titled Contrasts, co-commissioned by Benny Goodman as one of that jazzman’s first ventures into the contemporary classical clarinet repertoire. Bartók gives the clarinet plenty of exacting work, from a cadenza in the first movement covering the instrument’s entire range to wild folk-music gyrations and car horn honks in the finale. Meanwhile the violinist gets to play bowing and plucking at the same time. Even the pianist gets a few solos. All three performers were vividly on point throughout this attractive yet demanding music.

The other trio was the Suite from Stravinsky’s L’histoire du soldat (The Soldiers Tale). A far more enjoyable work without the full version’s enervating narration, this piece was the most enchanting of the entire concert. Sussmann’s cutting, bow-heavy tone was good on such angular music, Park kept the dance-like rhythms pumping, and de Guise-Langlois played with consuming energy and drive.

De Guise-Langlois played one other piece with Park, Leonard Bernstein’s early Sonata for Clarinet and Piano. Composed just after Bernstein completed his formal education, and before his sudden conducting fame, it has an earnest, academic air to its slow sections. The Coplandesque fast parts give hints of the Bernstein to come, yet compared with Bartók’s Contrasts, written a couple years earlier, it’s hesitant. In this work the composer was still figuring out how to be Leonard Bernstein. The performers gave him such help as they could.

The richest and most beautiful sounds of the concert came when the two clarinetists played together.

In Francis Poulenc’s Sonata for Two Clarinets, the only piece on the program without piano accompaniment, de Guise-Langlois on a clarinet in A and Shifrin on one in B-flat traded off repeated figures like two wheels rotating at different yet complementary speeds. Like Bernstein’s, this is an early work giving hints of the composer’s upcoming development: in this case, Poulenc’s grace and wit.

For Mendelssohn’s Concert Piece in D Minor, Op. 114, de Guise-Langlois played a basset horn, a longer and deeper-sounding member of the clarinet family bearing a turned-up bell so that something can hear it besides the floor. Her instrument and Shifrin’s B-flat clarinet made nimble swirls of different sonorities together in Mendelssohn’s pliant and supple lines.

The concert concluded with a divertimento, Il convegno, by the Italian opera composer Amilcare Ponchielli. Here two B-flat clarinets sang in lyrical harmony together in the manner of an operatic duet, adding giant swirling flourishes at the end. It was a delightful piece. Memo to Ponchielli, back there in the 1850s: Write more chamber music!