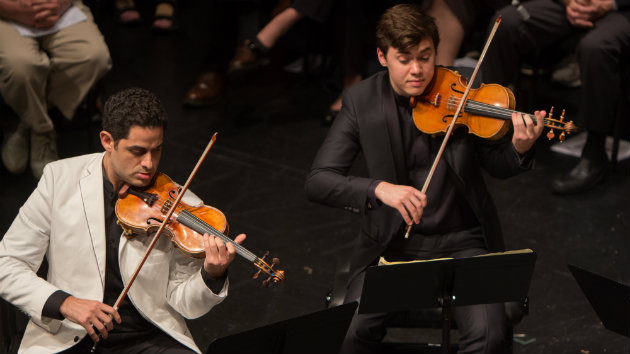 The [email protected] concert on Wednesday, part of a festival dedicated to the life and music of Schubert, stood out as the one without Schubert.

The theme  was Schubert’s legacy, and the program contained works emulating, adapting, or commemorating the composer. The Menlo-Atherton Center for the Performing Arts echoed on August 5, with the sounds of the composer who was not being played.

Given that all subsequent manifestations of the classical art song derive from Schubert’s canon, the songs were the closest in substance to his legacy. That includes wordless art songs. In Gloria Chien’s rendition of three of Mendelssohn’s Songs Without Words for piano, the most Schubertian aspect was the melodic lines. Otherwise, Chien’s delicate, running scales and lightly rhapsodic playing were reminiscent of Chopin. She avoided the over-emotionalism, once so common in performances of these pieces, which largely drove them from the repertoire.

Brahms’ Zwei Gesänge, Op. 91, owe as much to Schubert’s chamber music in their interaction between viola and piano — played respectively by Arnaud Sussmann and Gilbert Kalish — as they do to Schubert’s songs. Sara Couden sang in a stately contralto, whose even strength across both volume and register summoned up images of a late 19th-century parlor, making for another vivid performance.

The program contrasted two styles of adaptation, one by Franz Liszt and one by Fritz Kreisler. Liszt buried Schubert’s song “Die Forelle” under a blizzard of elaboration and decoration in his piano arrangement. Gilles Vonsattel played the piece deadpan, as if to say he was just reporting what the score told him. The performance of his Quartet for piano and strings in E-flat, Op. 47 ... emphasized more of the seriousness and drama of Schubert than the warm cheerfulness typical of mid-period Schumann.

By contrast, Kreisler’s arrangement of excerpts from the ballet music from Rosamunde for violin and piano entirely complemented the original music. The biting double-stops of Benjamin Beilman’s violin brought a welcome vigor to the jolly melodies. Hyeyeon Park accompanied him in this delightful piece.

Robert Schumann, probably Schubert’s first, enthusiastic, non-Viennese fan, has never seemed more Schubertian than in this performance of his Quartet for piano and strings in E-flat, Op. 47. Vonsattel and Beilman, joined by Paul Neubauer on viola and Laurence Lesser on cello, emphasized more of the seriousness and drama of Schubert than the warm cheerfulness typical of mid-period Schumann. This was signaled from the start as the energy methodically built up, instead of jumping out when the Allegro emerges from the slow introduction.It was a finely dedicated and coherent musical offering.

John Harbison’s commemorative work, November 19, 1828, titled for the date of Schubert’s death, depicts him continuing posthumously the counterpoint lessons with Simon Sechter he had undertaken in his last weeks. Harbison combines Schubert with late 20th-century technique in an eerie and ghostly style. Light and delicate quotations and pastiche from Chien at the piano alternated with firmly-bowed melodies in dissonant harmonies from the strings, or whispery long-held notes. Violinist Danbi Um joined Neubauer and Lesser as the string players in this intriguing and memorable work.

Some actual Schubert was heard at the Prelude concert prior to the main event. A quartet of the young professionals of the festival’s International Program gave a warm and inviting performance of the “Rosamunde” String Quartet in A Minor. Another quartet of performers from the same program played a dark and solid version of Brahms’ Quartet for Piano and Strings in C Minor, Op. 60. As with all the Prelude concerts, this was as worthwhile as the main event.