The program at Old First Church on Sunday afternoon was titled "Alla Zingarese," but the program of the Laurel Ensemble actually covered the two principal aspects underlying traditional Hungarian music: the native folk music and the better-known Romany traditions. ("Romany" is current preferred PC-speak for "Gypsy.") It added up to a hint that we might start thinking of expanding the term Three B's — Bach, Beethoven, and Brahms — to include Bartók as the new fourth "B".
A flute–piano transcription of Bartók's music opened the proceedings, followed by an authentic piece. First came something titled Suite Paysanne Hongroise (Hungarian peasant suite), put together and arranged by someone named Paul Arma. Then we heard the composer's authentic Contrasts (1938) for clarinet trio. 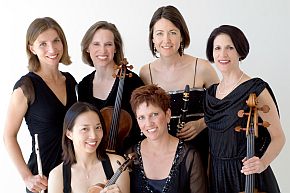 Thing is, in his music Bartók was absorbed with Hungarian peasant-music traditions, not Romany music. Arma's Suite is set as three movements individually titled: Chants populaires 1-4; a Scherzo; and Vielles dances 1-9. Those are all apparently drawn from this and that among Bartók's literal notations of peasant folk song or his smaller piano settings. (These titles are not listed in Bartók's official catalog of works, and certainly not in French.) But no matter. They amount to a charming bouquet of tiny pieces, a sort of folksy nosegay. While technically fine, Laurel's performance stuck me as a tad too literal.

By contrast, Contrasts was an authentic piece commissioned of Bartók, written particularly for the great jazz clarinetist Benny Goodman, and first heard in 1940 as played by Goodman and violinist Joseph Szigeti, with Bartók himself as pianist. Shortly after the New York premiere the three recorded the slight, zany Contrasts for Columbia. As far as I know, this was the composer's sole commercial recording while in the United States.

The piece is laid out in pretty much the traditional three-movement manner of a formal trio. Each of the three movements carries its own title: "Recruiting Dance" is in a freelance sonata form (no recapitulation), "Relaxation" comes across in Bartók's slightly eerie night-music fashion, and a riotous "Fast Dance" finale is highlighted with sonic burlesques and a bravura clarinet solo. Violinist Mok was especially impressive in the part written for Szigeti, and the audience obviously loved it.
Zinger of a Zingarese
Brahms' first Piano Quartet amounts to one of his major accomplishments in any medium. I rank its general quality right up there with the best of his symphonies, yet it's not programmed all that often, due to the instrumentation. Piano quintets we get, piano quartets we get far fewer of. After all, there are no standing full-time piano quartet ensembles in today's music world.

Indeed, those are the reasons that Schoenberg decided to orchestrate the piece for fully modern symphony orchestra. In that form it has sometimes been called "Brahms' Fifth Symphony."

The Romany influence of the Finale is way too obvious to slip past unnoticed, as it comes replete with a violin cadenza. But the truth is that this influence is rarely out of hearing anytime during the work's four movements. The four Laurel Ensemble musicians played it lovingly and knowingly. I suspect this is music they've played often, since it seemed so clearly a part of their psyche. They grabbed the audience's attention by the throat with the opening bars and never let go.

I looked around to find that many listeners were sitting up at attention on the edge of their pews. Superb performance can do that, and this was just that. I think even small kids would have had the same reaction. During the relaxed lyrical passages of the slow movement, as well, I sensed a line of tension that remained palpable with anticipation.

No program notes about the music were offered, which was a pity for unusual things such as the opening Paysanne suite. Like: who is Paul Arma? (Turns out, a student of Bartók's.) How old is the transcription? Instead, we got little lectures before each piece, and much of these was of questionable worth.

Does anyone in the average audience care at all about Bartók's use of tritones or seconds for the harmony during his Contrasts? Indeed, I wonder how many of SFCV's readers can define the musical term tritone, or care what it is? I have a degree in music theory, and I don't give a frog's hair about it. It plays no part in my listening experience. Nor can I imagine anyone else sitting there thinking about harmonic analysis during a performance.

Look here, it was a concert, not a class lecture hall. My advice to the Laurel Ensemble would be to stop talking and convince the house only through their quality of musicianship.