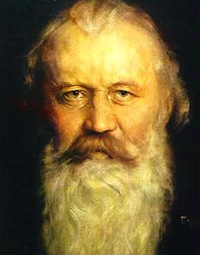 The [email protected] chamber music festival focuses this season on Brahms. Its third regular program, at the Menlo-Atherton Center for the Performing Arts on Saturday (repeated from Stent Family Hall on Friday), was built around one particular Brahms work, the String Sextet in B-flat, Op. 18. This is an infrequently played gem of a piece — its successor sextet, Op. 36 in G, is more often heard — with a particularly treasurable slow movement theme and variations.

Though the Sextet is passionate, and Romantic enough, it also carries a sufficiency of the formal and stately air common in Baroque music, one of Brahms’ chief inspirations, so that [email protected] decided to pair the Sextet with some Baroque chamber music. In that context, the concert’s title is a puzzler. “Veiled Symphonies” was actually Robert Schumann’s description of Brahms’ early piano sonatas — he didn’t live to hear the Sextet — and alluded to the near-orchestral weight of Brahms’ piano writing. There’s no piano in the Sextet, and it doesn’t take any special skill to make six strings (half again the size of a string quartet) sound like a still larger ensemble.

Other than that, there’s nothing symphonic about the Sextet, and Saturday’s performers were not out to convince you that there was. Instead, they took the program’s other cue and made it sound like a Baroque concerto grosso. It was a formal dance of the instruments with pairs of lines matching up and trading off. Its delight was in the carefully balanced sonorities, with only a few glitches in the finale that I could hear.

This was the meeting of equals that Brahms had in mind. First violinist Yehonatan Berick wisely and gracefully refused to dominate. He and second violinist Arnaud Sussmann kept a cool, banked tone that matched the lower instruments. Yura Lee played a boldly forthright first viola, a challenge on that instrument, and her duets with second violist Paul Neubauer jumped out in a particularly distinct way. First cellist Eric Kim also gave out some emphatic solos. Despite that, his sound was at times muffled, which might have been an acoustic trick of the auditorium, though second cellist Laurence Lesser seated next to him was always at least equally clear.

Melancholy, of the kind more often associated with works of later on in Brahms’ career, was the dominant emotion of the outer movements of the Sextet in this performance. The inner movements were different. The slow movement focused more on an unusually heavy opening, with slashing supporting chords, than on its wistful ending, and the scherzo was a brief contrasting interlude of bouncing activity.

Despite the Sextet’s Baroque antecedents, the two actual Baroque works on the program shed little light on it. Vivaldi’s Trio Sonata in D Minor, Op. 1, No. 12, is a set of variations on an old popular melody called La follia. The sonata was evidently chosen for this program under the impression that Brahms used the same melody for the Sextet’s theme and variations. So the program notes say, but this is not correct. Though they’re in the same key and have some harmonic similarities, the melodies and the chord sequences are quite distinct. Nor is Brahms’ dark, dignified solemnity remotely akin to Vivaldi’s bright, extroverted display. Sooyun Kim, playing a small Baroque flute, led the ensemble to dashing and delightful effect. Berick’s violin and Eric Kim’s cello were equally energetic, while Alessio Bax provided soft harpsichord support in the background.

By contrast, Bach’s Trio Sonata from The Musical Offering was stately to the point of dullness, which the Brahms never was. This is despite the fact that it featured the same Sooyun Kim on flute and Bax on harpsichord; nor can I blame Sussmann and Lesser, who joined them on violin and cello respectively. This complex work is heavily contrapuntal, a feature separating it from both the Vivaldi and the Brahms variations, each of which is basically melodic with accompaniment.

If there was a veiled symphony on the program, it was the remaining item, Clara Schumann’s Piano Trio in G Minor, Op. 17. The only major chamber work by this regrettably unprolific composer, it is nothing like the trifle that stereotypes might suggest of a 19th-century female composer. It’s a huge piece: a half-hour long, animated and emphatic throughout, and as full of sound as three performers could make it. Yura Lee, this time on violin, and Eric Kim on cello meshed their lines with vehemence, clinging together musically as if their lives depended on it, with equal energy and eloquence coming from the piano at the hands of Juho Pohjonen. Even more than was the Brahms, this was a great performance of a work too rarely heard.