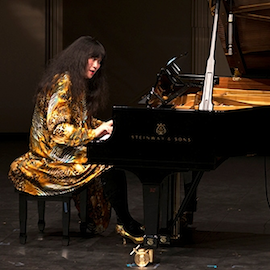 Braving the torrential downpour over the weekend, some 400 souls filled the Center for Performing Arts auditorium at Menlo-Atherton to attend a Sunday afternoon concert, which can perhaps best be described as “Wu Han and Friends, Partying in Paris.”

Under the actual banner of “Pianists in Paris,” pianist Wu Han along with Jean-Efflam Bavouzet and Soyeon Kate Lee, with Anne-Marie McDermott, presented compositions for piano ensembles by such composers as Debussy, Bizet, and Gershwin. When you have four pianists playing musical chairs (or benches), you almost expect occasional collisions and much laughter. The team certainly did not disappoint in that respect.

The first half of the concert was a study of the glorious textures and colors of Debussy. Lee and Bavouzet opened the concert with Ravel’s duo transcription of Nocturnes, originally written for an orchestra, which had been inspired by a series of paintings, also titled, Nocturnes, by the American James Abbott McNeill Whistler. The three movements, “Nuages,” “Fêtes,” and “Sirènes,” were vivid and indulgent, with the night clouds seeming more like the aurora borealis with its vibrant yet mysterious cascading colors.

Then came a special treat, by way of an original piano duo transcription of Debussy’s Jeux by Bavouzet. Although a neglected work, partially due to the failure of the ballet for which it was written, it certainly deserves recognition and comparison to the composer’s more famous orchestral works, such as La Mer. Bavouzet did a superb job of transcribing the thick orchestral score, and he along with McDermott brought out all possible colors and textures as well as movements.

When you have four pianists playing musical chairs (or benches), you almost expect occasional collisions and much laughter.

Debussy’s original piano-duet work Petite Suite separated the two grand works, almost like a palate cleanser between two rich courses. Unfortunately, it seemed to be in a great hurry throughout. The boat ride in “En Bateau” was in the choppy, frigid waters of the Atlantic, rather than a lazy afternoon on the Mediterranean Sea, and “Ballet” became more of an acrobatic exercise. I yearned for more indulgence in each of the little, special moments.

The highlight of the afternoon may have been Bizet’s Jeux d’Enfants, performed by Han and Bavouzet. The ever-so-effervescent Han and ever-so-patient Bavouzet delighted the audience through humorous and lighthearted interpretations of scenes such as “Soap Bubbles.” It was a reminder that we were all once children, and we don’t have to take everything so seriously. Even when a cell phone rang in the audience between two scenes, Bavouzet announced that it was a call from Bizet, eliciting laughter, and simply moved on to the next scene. (The interruption may even have been part of the plan.)

It encapsulated why piano ensembles are fun, and why they were such a popular pastime in the 19th century.

As a triumph of creative programming, a stranger barged on to the scene in the end: George Gershwin, a veritable American in Paris (the work that was played). However, the character was more timid and confused than the brash, stereotypical Yankee in the ’20s. It is difficult to translate poignant orchestral colors in the original for two pianos, but with vague melodies and ambiguous accompaniments, many of the points that matter in the piece seemed lost.

Yet the four artists captured the true joy of piano ensemble works, by piling up on a single piano for an encore. With Victor Borge–like theatricality, it encapsulated why piano ensembles are fun, and why they were such a popular pastime in the 19th century.