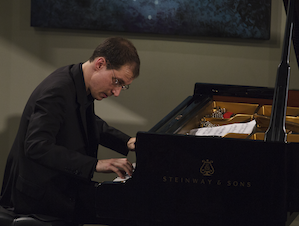 Among the wide variety of programs, from chamber music performances by young artists to recitals by some of the most highly regarded artists in the world, the “Carte Blanche” concert series in the annual [email protected] festival is perhaps the most intriguing one for those with a deep appreciation of the classical repertoire.

As codirector Wu Han explained to the audience, the festival invites the artists to present programs that were “rejected” for other concerts. As such, the artists are given the freedom to present a program that may have a deep personal connection to them, or an unexpected juxtaposition of various works. On Sunday morning, pianist Gilles Vonsattel returned with a program peppered with themes of nationalism and revolution. He presented a wide gamut of styles and different “revolutions” with works by composers ranging from Beethoven to Rzewski.

The “revolutions” were divided into two groups: geopolitical and musical. Liszt’s Funérailles led the geopolitical revolutionaries, with a haunting depiction of the bloody, failed Hungarian Revolution of 1848. Beginning with the dissonant bells, Vonsattel vividly illustrated the terror of the uprising with the eruption of violent forces in his left hand with exceptional clarity.

The revolutions continued with Janáček’s Sonata 1:X.1905, mourning the slain Czech protester František Pavlík, bayoneted during a demonstration demanding a Czech university in Brno, then part of the Austro-Hungarian empire. Composed in impulsive anger about the incident, the two movements are what were left of the composer’s depressive episode during which he tossed his manuscript into the Vltava River.

The first movement, Předtucha (Foreboding), was a personal lament that described the anxiety about the unrest. I personally wished for more intimacy in the performance, but the haunting second movement, Smrt (Death), with its repetitive motif that moved the narrative forward, brought out the anguish of the inevitable.

For musical revolutions, Vonsattel gave listeners Beethoven’s Six Bagatelles, Op. 126, and Sonata No. 14 in C-sharp Minor, Op. 27, No. 2, “Moonlight.” The Bagatelles, which opened the concert, were written in Beethoven’s last years, and their innovative quality, full of surprises and humor, was illustrated with full colors. In particular, in the B-major section of the fourth Bagatelle, the bagpipe-like drone complemented the peculiar melodic line with a rest on every downbeat, adding a pastoral atmosphere.

The third movement was full of life, thanks to the clearly articulated Alberti-bass that gave rhythmic support. Accents came as punches, while lyrical lines soared.

The “Moonlight” sonata, though, started off rather heavy, with halting hesitations between every measure. The tempo of the movement is a controversial topic among pianists, but I stand firmly on the side of interpreting the piece alla breve, meaning played two beats per measure instead of four. Yet the third movement was full of life, thanks to the clearly articulated Alberti-bass that gave rhythmic support. Accents came as punches, while lyrical lines soared, and the crushing, alternating diminished arpeggios toward the end were explosive.

Vonsattel just about apologized for Saint-Saëns’ Africa Fantasy, defending its “kitschiness,” before diving into the admittedly naive interpretation of an exotic locale, namely Algeria. Yet the music was delivered with solid conviction, minus the overt flamboyance and excessive bravura that could easily have contaminated it. Despite the naiveté of the composition, from the point of view of the colonialists, the composer’s fascination with exotic cultures was illustrated with much lightheartedness, which almost made it go down like a glass of champagne after the deathly anguish of Janáček.

The piece conveyed such vivid imagery that it seemed to leave the audience engrossed in the not-so-pretty side of our history of developing prosperity.

Vonsattel concluded the program with Frederic Rzewski’s innovative and shockingly graphic Winnsboro Cotton Mill Blues, presenting a totally different kind of revolution: the industrial revolution. Beginning with the monorhythmic, oppressive groans and moans of the heavy machinery, illustrated with alternating tone clusters, Vonsattel gave the audience a tour of the mill, circa 1920.

Over the deafening roar of the factory, listeners could almost hear the workers singing “Ol’ man Sargent sittin’ at the desk… The damn ol’ fool won’t give us no rest.” The cacophony of the machinery rivaled that of George Antheil’s infamous Ballet Mecanique, though the interlude where we heard a chorus of the workers singing the blues gave the music a glimpse of human warmth, amidst the oppressive heat of the South Carolina summer and the cold steel beasts that filled the mill. It was not long, however, before the workers had to return to their positions, continuing their song. The piece conveyed such vivid imagery that it seemed to leave the audience engrossed in the not-so-pretty side of our history of developing prosperity. They showed their appreciation with a roaring standing ovation.

Vonsattel generously gave Schumann’s Arabesque, Op. 18, as an encore. In the end, the morning made for quite a musical and historical journey through two centuries, and was followed by a picnic on the beautiful campus of the Menlo School. Every Sunday morning should be like that.