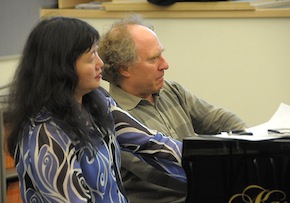 The [email protected] festival season is drawing towards a close, as the directors and administrators who introduce each concert never tire of reminding us. The final of the four Carte Blanche Concerts, on Wednesday at the Menlo-Atherton Center for Performing Arts, was originally scheduled to feature pianist Menahem Pressler, who had to cancel due to a family emergency. Fortunately the cancellation came early enough that a replacement program could be finely polished and not just hastily shoved in place.

The featured pianist became long-time Menlo favorite Jeffrey Kahane, not quite as venerable as Menahem Pressler — not yet, anyway — and just as talented and distinctive a performer. As always, the festival was fortunate to have him.

The program began by outmaneuvering the festival’s upcoming closing “late Brahms” concert for lateness, with parts of Brahms’ very last work, six of the eleven chorale preludes for organ, Op. 122. No organ being available, Kahane arranged them for piano four hands, with Wu Han providing the other two hands. Chorale preludes, short compositions weaving elaborations around a slow chorale hymn melody, were a favorite form of Bach’s. The Bach inspiration on Brahms was strong in this performance. They sounded more like piano performances of Bach than the organ originals sound like Bach’s organ works. They were gently solemn and spiritually beautiful. No. 11, the last of them all, was particularly effective. The echoed phrases which Brahms directs to be exchanged among the organ’s three manual keyboards were traded off between the two pianists for a subtly entrancing effect.

Kahane came back alone for an epic performance of five works, some of them fairly long, by Chopin. In keeping with the theme, they were all late Chopin. Except for the Ballade No. 4, Op. 57, which incorporates some flash and drama, they’re introspective pieces, low on the elegant melodies and dazzling runs more common in his earlier work. In the Barcarolle, Op. 60, and the Polonaise-Fantasie, Op. 61, Kahane melded a dreamy quality with elegant tone color and enough passion to keep the music flowing and interesting without trying to browbeat either the piano or the score. Two briefer Mazurkas, Op. 50, No. 3 — the most charming piece in the entire set — and Op. 56 No. 3, completed the Chopin part of the program. Having had little interruption to his playing — he took a couple bows, but did not leave the stage — Kahane looked exhausted by the end. The audience, though, was enriched by the experience. 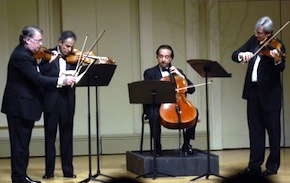 After intermission, Kahane was joined by half of the Emerson Quartet — violinist Philip Setzer and cellist David Finckel — and violist Paul Neubauer in, for a change, an early work of its composer’s, Gabriel Fauré’s Piano Quartet No. 1 in C Minor, Op. 15. In a brief talk at the beginning of the concert, Kahane quoted an article by the young Aaron Copland, written while he was residing in France and when Fauré yet lived, calling Fauré a neglected master and suggesting that he was the French Brahms. Not, Copland added, that Fauré’s music sounds like that of Brahms; rather that he occupies a similar place, writing distinctly individual works, especially chamber music, of high quality that stick with the listener.

For all that, the first movement of the quartet did sound rather like Brahms. The interwoven lines in the strings and the generally serious mien could have been his. Only some light bubbling in the piano and a few characteristically French turns in the melodies really gave away that it must be a different composer. The other movements, though, were quite distinctive. The silken smooth string lines in the scherzo’s trio, echoed in the impassioned performance of the slow movement, spoke in the unique voice that Copland was referring to. A vigorous finale closed the work off, turning slightly back towards the manner of the first movement.

The Prelude performance before the concert featured two more late works, violin and piano sonatas by Brahms and Schumann. The Brahms sonata, in A Major, Op. 100, played by violinist Nicole León and pianist Christopher Schmitt, was dark and thoughtful, just what one expects of late Brahms. The Schumann sonata, in D Minor, Op. 121, played by violinist Miki-Sophia Cloud and pianist Moritz Winkelmann, was, like others of Schumann’s neglected late works, strange and alternately headlong and hesitant, particularly in an unforgettably weird and creepy slow movement, full of violin pizzicato, double-stops, and harmonics.