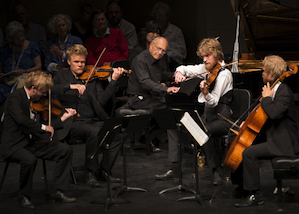 There is music in another dimension. Just as at times music takes over when words fail, there is this otherworldly experience that relieves the limitations of music itself.

This is what you hear in the maze of the forest and of anguished feelings in Schoenberg's Transfigured Night; when Mahler's Symphony No. 9 trails off into silence; when the chorus falters with grief in the Mass in B Minor's "Crucifixus" (before the redeeming explosion of "Et resurrexit").

The other dimension, the ambiguous-transcendent feeling persists through the entire third movement of Beethoven's String Quartet No. 15, Op.132, a contemporary of his Ninth Symphony, but kin only to the meandering, sublimely lyrical slow movement. The string quartet movement is marked Molto adagio and inscribed by the composer as "Holy song of thanksgiving to the Divinity by a Convalescent, in the Lydian Mode." He might have just as well called it "Music that suspends time." 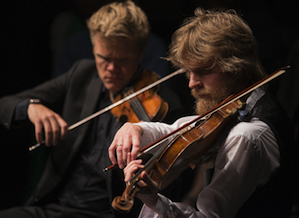 There is probably no chamber music that poses more contrasting demands on the performers. It is a landscape without landmarks, a progression of phrases both inevitable and mysterious; it requires from the musicians both superb control and total letting go — shaping music that exists without recognizable boundaries.

On Sunday, in [email protected]'s splendid Center for Performing Arts at Menlo-Atherton, the youthful Danish String Quartet made its West Coast debut with a concert of one ravishing performance after another, culminating in the Beethoven, weaving magic over the full house, which gave a genuine standing ovation to the quartet, not one of those half-hearted crouching applauses. No, this was very real, really loud, and more than well-deserved.

To be pedantic about it, the quartet is three-fourths Danish because cellist Fredrik Schøyen Sjölin is Norwegian. But violinists Frederik Øland and Rune Tonsgaard Sørensen, and violist Asbjørn Nørgaard are true, if non-melancholic Danes:

We are simply your friendly neighborhood string quartet with above average amounts of beard. The three of us met very early in our lives in the Danish countryside at an amazing summer camp for enthusiastic amateur musicians. Not yet teenagers, we were the youngest players, so we hung out all the time playing football and chamber music together.

During the regular school year we would get together often to play music and just have fun. We became best friends. In 2001, professor Tim Frederiksen of the Royal Academy of Music in Copenhagen got in touch with us and started coaching us on a regular basis. All of the sudden, at the ages of 15 and 16, we were a serious string quartet. It all happened so fast that none of us seemed to notice the transition. 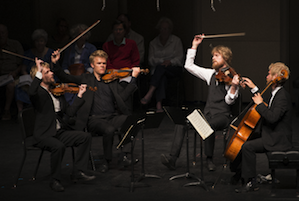 In just three years of being a professional ensemble, the quartet has already received raves in major newspapers, and was given the Carl Nielsen Prize, Denmark's most important cultural award.

At the Sunday concert, the brief opening piece, Mozart's arrangements of two Bach fugues, was the perfect introduction to the musicians, instruments entering one by one, right to left, from cello to first violin. We heard microscopic solos, clear, warm, beautiful sound from each instrument.

The quartet then launched into Haydn's 1796 String Quartet in D Minor, Op. 76, No. 2, nicknamed "Die Quinten," because of the first movement's motif of descending fifths. While the Danes were phenomenally musical and consistent throughout the work, they gave a special treatment to the "mildly demonic" minuetto, known as "Hexen-Menuett" or Witches' Minuet. With the two violins in unison, viola and cello mimicked them an octave lower. The musicians virtually exploded (while adhering to the boundaries of Haydnesque classicism) in the joyful finale.

Shostakovich's 1940 Piano Quintet in G minor, op. 57, followed, a contemporary of the first string quartet and Symphony No. 7 ("Leningrad"), in the brief period between the end of the Winter War with Finland and the beginning of Nazi invasion the following year.

With Gilbert Kalish at the piano, the work opened with a big, bold, symphonic forte, and as the strings joined in, it sounded for all the world like a piano concerto. The Danish SQ played brilliantly in the runaway scherzo and with deep emotion in the next movement's "night music." First violinist Øland shone in his solo of a Russian folksong, all four performed as virtuosi as the music sped up again with a grotesque circus tune, a Shostakovich trademark. All through the piece, Kalish and the quartet remained joined at the hip, five instruments playing as one.

And then the Beethoven. This next-to-last of the late quartets is still so complex and rich, it's difficult to imagine what the first audiences heard in it in 1825. The first two movements, performed with power and certainty, served as a prelude to the wizardly third movement Beethoven wrote after a severe illness (hence the reference to "thanksgiving... by a convalescent"), and anybody in the audience who by now didn't fully realize the brilliance of the Danes came to a moment of inevitability.

Here, transcendent music received its due from four musicians making an unforgettable debut. May they soon return.