“Great Piano Quartets” was the title of the final concert in [email protected]’s winter series, Sunday afternoon at the Center for Performing Arts at Menlo-Atherton. The finest performance on the altogether excellent program, though, was of a string trio. 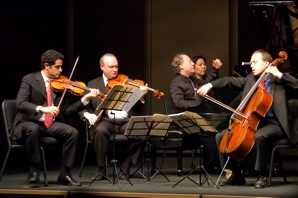 This was Beethoven’s D-Major Trio, Op. 9, No. 2. Generally considered the lightest and even least consequential of his trios, this early work of the late 1790s turned out to be a perfect candidate for demonstrating an embryonic version of the heroic Beethoven that would flourish five or 10 years later. Violinist Arnaud Sussmann, violist Paul Neubauer, and cellist Christopher Costanza played with a banked-down fire and gutsiness that burst out in small explosions throughout the piece. The score contains a lot of sforzando exclamations, and the players made the most of them. The tone quality from all three was highly textured. It was raw, colorful, and continually varied. The work came with a heft that suggested it shouldn’t be the neglected member of the Opus 9 set.

The two piano quartets on the program, by Mozart and Schumann, also possessed all these virtues, with the additional attraction of Jeffrey Kahane as pianist. His effervescent style is ideal for these works, especially the Mozart. 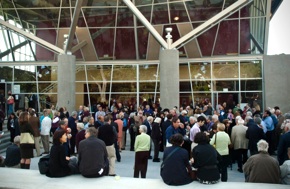 ozart’s Quartet in G Minor, K. 478 — the piece generally credited as creating the piano quartet as we know it — is among the works that give him the reputation of a composer particularly difficult to play well. If it’s not performed with absolute commitment and consummate artistry, it will fall flat and sound dull and trivial. There was no need to worry about that in this concert. This was Mozart with passion and meaning. Unison attacks came with the same bite as in the Beethoven. Tension was carefully ratcheted up during key changes, creating small harmonic adventures out of them. Kahane’s piano trippingly rolled through curling phrases, and bounced energetically in the background when holding harmony for the others. Sussmann and Neubauer made particular beauty with their duets. All four players brought a wonderfully quizzical expression to the little “upturn” motive in the finale rondo’s main theme.

If Schumann’s Quartet in E-flat Major, Op. 47, was slightly less superb than that, it was only in comparison with the high level of what had come before. The structure of the work in this performance seemed less inevitable than in the other pieces, the repetitions just slightly less necessary and less varied. Costanza’s solo in the Andante movement struck me as lacking somewhat in strength and beauty. Other listeners singled it out for praise, however. And he was wonderfully dynamic in the fleeting scherzo opening, underpinning Kahane’s notes with precisely the right sense of color. Throughout, all four brought the same strengths of energy and harmonic adventure that they had to the other works. The fugato passages in Schumann’s finale were bright and forward-moving rather than dogged or motionless.

Throughout the program, Costanza kept a little to the background, appearing concentrated and intense but distinctly unaggressive in his playing. Sussmann was more forward in character and looked slightly more relaxed, rejoicing in a highly even and simple midrange sound on his violin. Neubauer’s viola was dark and resonant, bringing solos up from the depths. And at the keyboard Kahane, without dominating or unbalancing the ensemble, was always conspicuous, whether playing solo melodies or simply beating out lower harmonies, all of which he did well.

This was the type of concert at which [email protected] excels. Amazingly, the hall was not entirely full. Wait till word about next year’s winter series gets out, though.