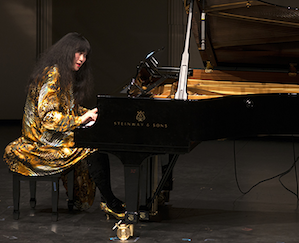 Other programs at [email protected] have reasonably adhered to this year’s theme, “From Bach.” Saturday’s program at the Menlo-Atherton Center for Performing Arts was cheekier. The title was “French Connections,” so may Bach be held a father of French music as he is of trios and of preludes and fugues?

Festival co-director Wu Han, seated at the end of a piano bench before the concert, explained that there’s nothing particularly French about Bach’s series of French Suites for keyboard — the title wasn’t his anyway. What they do have in common with the best French music, she said, is a joy and geniality in musical expression. She proceeded to demonstrate this by turning to the keyboard of the Steinway grand to her left to deliver the most lively, playful, and cheery rendition imaginable of the fifth suite in Bach’s set. The concluding Gigue was especially pleasing. The bouncing movement of the pianist’s fingers told the whole story. This was Bach speaking unhindered through the piano.

The three early 20th-century French works that followed, however, told a different story in a different language. All three included harp, vigorously played by Bridget Kibbey. Camille Sant-Saëns, the eldest of the three, contributed the most Romantic, emotionally expressive, and enjoyable work. His Fantaisie in A Major for violin and harp, Op. 124, set the crisp precision of Kibbey’s harp and the guttiness of Kristin Lee’s violin into intricate cooperation and friendly competition. Though it was genial, its language was so much more intense than Bach’s that a comparison seemed inappropriate. 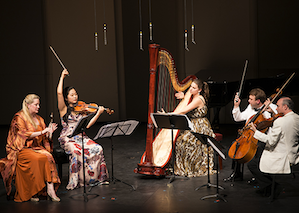 Debussy’s Sonata for flute, viola, and harp that followed, with flutist Tara Helen O’Connor and violist Paul Neubauer joining Kibbey, fled in the opposite direction. Again, though it could be called joyful — it certainly was not angry or sad — it was so emotionally distant that measuring it on Bach’s scale seemed irrelevant. It wasn’t cold — that would be too strong a reaction — just cool. There were no full Impressionist harmonies; indeed, the three instruments hardly interacted. Instead, the work consisted of little sparkly bits in isolation. Occasionally a hint of warmth or agitation would pass through like a light breeze, and then the emotional neutrality would reassert itself.

Marcel Tournier’s Suite for flute, violin, viola, cello, and harp, Op. 34, was written for the same harpist who had played in Debussy’s premiere. He had enjoyed being in an ensemble so much — at the time, there was little chamber music with harp in it — that he formed a group to perform regularly.

In Tournier’s Suite, he got a genuine work of chamber music. There is none of Debussy’s spatial separation here. Much of the time, the strings — all four of them, with the harp playing a supporting chord-strumming role, rather than starring as in the other pieces — made unusual and evocative harmonies together, with the flute sitting prettily like a cherry on top.

Tournier’s emotional tone was calm, rather than Debussy’s neutral, and the performance achieved a little genuine joy in the finale, appropriately titled “Fête.” Cellist Dmitri Atapine joined the four performers from the Debussy and Saint-Saëns. 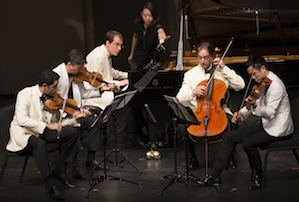 After intermission, five men in white jackets and black trousers, four of them with black bow ties, walked on stage. They looked like the headwaiters’ chorus. Instead, they proceeded to perform César Franck’s Piano Quintet, the antithesis of the concert, the piece designed to prove that French music can be passionate and intensely expressive (as if Saint-Saëns hadn’t proved that already).

All the technical ingredients for such a passionate rendition were there — the volume, the precision, the command of phrasing — yet all the potential never broke through. Instead, the energy was banked, in a slightly formal, almost dusty style. The deep feeling for the work’s organic flow that Wu Han brought to Bach was absent. Too much of what should have been dynamic was static. When not headed directly towards a climax, the music did not build. The dramatic buzzing at the start of the finale had movement but no tension. The most exciting moment came with the vicious pizzicato unison notes later in the finale. That’s the upside of valuing precision above drama.

A certain breakthrough occurred towards the ends of the movements, especially in the finale with successive solos by Richard O’Neill’s viola and Ian Swensen’s second violin. These joined many strong solos by Arnaud Sussmann on first violin and David Finckel on cello. Gilles Vonsattel thundered away on the piano behind them.

Unsurprisingly, the best part of the performance was the Lento middle movement, not “molto sentimento” as the composer directed, yet full of quiet lyricism, especially at the end, after the brief climax, as the dynamism fades into a peaceful post-storm calm. Here a banked reserve was the right feeling to have.

As was true last week, it was possible to make a full musical Saturday of hanging out at the CPA. A delightful Koret Young Performers Concert was followed by a slightly offbeat Prelude concert. (A highlight of the former came in nine teenage string players giving the full Wu Han lively treatment to Bach's Brandenburg Concerto No. 3; that Wu Han herself played the harpsichord continuo certainly didn't hurt.) The Prelude concert began with pianists Ellen Hwangbo and Shir Semmel playing Bach chorales transcribed for four hands by György Kurtág, with retro-modernist original pieces by Kurtág himself stuffed uncomfortably among them. This was followed by the palate-cleanser of an impressively gritty, gutsy, and Romany-flavored performance of Dohnányi’s Serenade for string trio by violinist Alexi Kenney, violist Yoon-Kyung Shin, and cellist Richard Narroway.