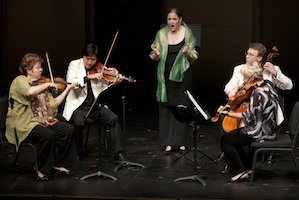 [email protected]’s Sunday concert, at the Menlo-Atherton Center for the Performing Arts, was titled “Enhanced: Tales Intensified,” and was intended to demonstrate dramatic storytelling in music. There’s hardly anything more common in music than telling stories, so even restricting the selection to works that could fit on a chamber music stage left many options to choose from. Of the four works Menlo’s programmers chose, three displayed their intensification through rich, complex, modernist harmonies, in the style known as Expressionism.

Most straightforward of these was Il tramonto, by Ottorino Respighi. Its story is an Italian translation of Percy Shelley’s tragic poem The Sunset. Respighi presents the poem in a simple, direct manner, as a text for a mezzo-soprano to sing. Susanne Mentzer’s dry, unresonant voice is not wholly unbeautiful, and it is admirably suited for the essential task of conveying every phoneme with perfect clarity. That’s what’s wanted when the singer tells a story, isn’t it? Even a non-Italian speaker hardly needed the lyric sheet. Respighi accompanies her with a string quartet, whose smooth, rich harmonies spun out the poem’s emotional journey. Far longer and more free-flowing than a typical lied, this is not a work by the crisp neo-Baroque Respighi, nor by the grandiose celebrant of Rome’s landmarks. It’s more openly late-Romantic music from 1914, early in the composer’s career.

The Psycho Suite for strings, by Bernard Herrmann, presents the quintessential 20th-century form of musical storytelling: orchestral movie music. Normally partial toward winds and brass, Herrmann chose to restrict himself to the monochromatic sound of strings to match the black-and-white cinematography of Alfred Hitchcock’s 1960 movie. The insistently motto-driven music appears in orchestral form on the soundtrack; on stage on Sunday it was played with tremendous fervor and bite by a string nonet, or nine players, the smallest ensemble that could cover all the separate parts in the score. The superbly qualified players — the violists, for instance, were Geraldine Walther and Paul Neubauer, two of the more renowned names on that instrument — played it like a chamber work, not always matching their bowing when the lines merged.

There’s hardly anything more common in music than telling stories.

Herrmann compiled his suite directly from the film score, with minimal rewriting. Although the suite is only 18 minutes long, it contains 11 separate cuts. The composer provided titles for each movement; these, unfortunately, were not listed in the program, and listeners had to rely on memories of the film to figure out what Herrmann was describing. This was not difficult. When the famous slashing screeches depicting the murder scenes came by, a ripple of laughing recognition passed through the audience, surely not the reaction either Herrmann or Hitchcock intended. Even apart from the movie, the music is unforgettable, and think, too, of this: A mass audience in 1960 was unlikely to hear classical music in so modern an idiom in any other forum.

Herrmann was followed in the concert by André Caplet, an early 20th-century French composer best remembered as the orchestrator of Debussy’s Children’s Corner Suite. His own Conte fantastique shows only the occasional touch of Debussy-like Impressionist harmonies. It tells the story of Edgar Allan Poe’s Masque of the Red Death in purely instrumental form for harp and string quartet, in an Expressionist style surprisingly akin to Herrmann’s. The harp, played by Bridget Kibbey, dominated the storytelling, providing much of the dance music, the striking of the clock, and even (courtesy of knuckles on the soundboard) Death knocking at the door. The violins chimed in on the dance music, while the lower strings mostly provided eerie background rumblings and harmonic support. This is an odd and rare work that received a committed performance.

That left one final, quite distinct, work for after intermission. Stravinsky’s L’histoire du Soldat is a multimedia piece from 1918 intended to be performed with acting and dancing. Sunday’s performance was a simply staged reader’s theater production. Three noted local actors, standing before scripts on their music stands, tried their best to put life into a long, rambling, and rather confusing folk tale of a soldier who makes a deal with the Devil. James Carpenter as the Devil got the most personality into his portrayal; Kay Kostopoulos as narrator and some minor characters made a particularly vapid princess, though this may have been deliberate.

Even apart from the movie, the music is unforgettable.

Between the overlong spoken scenes, an ensemble of seven players on widely assorted instruments — two strings, two winds, two brass, and a percussionist — perked in with equally overlong chunks of Stravinsky’s melodically choppy, rhythmically jerky, and harmonically motionless music. At least the playing was good. Violinist Jorja Fleezanis, who led the ensemble, was particularly outstanding among her excellent colleagues in crispness and vitality. Between them, they made this slack and problematic work almost enjoyable to listen to.

The concert was preceded by one of those free “Prelude” concerts, by a team of young International Program artists, that Menlo does so well. Beethoven’s Piano Trio in D, Op. 70, No. 1, received a splendidly atmospheric performance; Mendelssohn’s String Quintet in B-flat, Op. 87, was hardly less effective. Special note should go to the pianist in the Beethoven, Lindsay Garritson, whom I’d previously heard in this series in works by Shostakovich and Dvořák. She’s a tall young woman who hunches over the keyboard and succeeds at imparting nuance while vigorously hammering away.