The audience quickly found itself in the dark last Wednesday at Stanford’s Memorial Auditorium. Percussionist Evelyn Glennie and guitarist Fred Frith walked on stage moments after the house descended into pitch-black, leaving only the sharp geometry of Glennie’s percussion instruments — which took up two thirds of the stage — and Frith’s two guitars and amplifiers to dance motionlessly against the effervescence of the backdrop. The music began without a word from either performer, despite the assurance in the program that everything would be announced from the stage. As Frith sounded the first mysterious notes from a bowed electric guitar laid face-up on his lap, the music spoke for itself in every way. 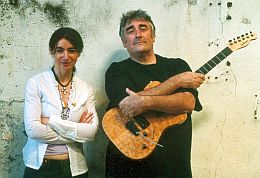 What materialized onstage between Glennie and Frith was essentially an in-depth conversation. The facility so evident in each of the players evoked the atmosphere of a debate between two extremely eloquent, persuasive orators, but the profoundly close exchange between the two was more a sensitive and, at times, passionate colloquy. The danger of public speaking, however — a danger we have all been made aware of these last few months — is that the content and meaning of what is said ultimately rests on the listening audience. And, for the two halves of the concert, the conversation did indeed escape some of those in attendance.

Glennie is a Grammy-winning percussionist and a composer with a formidable technique and a deep understanding of musical color and nuance. An important part of her musicianship is the fact that she feels the music more than hears it; clinically deaf, she took seismic and visual clues from Frith in their onstage dialogue. The audience, in turn, was challenged to feel the music differently. A spectrum of timbres and textures, definite and indefinite pitches, oscillating volumes, and fluctuating tempos required the music to be absorbed holistically, then parsed and processed by the conscious act of listening. There was a disconnect, however: Glennie and Frith, in the throes of their dialogue, provoked some of those who felt outside the exchange to leave the hall.
Free-Form and Fluid
It is unclear to what extent the two uninterrupted blocks of sound, which were separated by an intermission, were wholly improvised or partially predetermined. There were no music stands, no scores or parts, and both performers played almost throughout, except for Glennie’s silent movement between instrumental stations. The players’ techniques were equally unorthodox. In tandem with his bowing, Frith plucked the electric guitar strings; dropped various, indeterminable, objects on them; and pulled lace strings through them. Glennie played hand drums with sticks, a vibraphone with a bow, and a marimba with leather-flap-tipped sticks, and, toward the end of the presentation, she explored a menagerie of cymbals, gongs, and other pieces of pitched metal.

As a whole, the performance was about exploring the possibilities. The wide range of sound available to these two highly skilled musicians, extended even further by the exciting, innovative creativity with which the instruments were engaged, made it evident that true artistry lies in the ability to hear or, rather, feel more deeply and openly than expected. Amid all the possibilities being explored, there were those in the audience who marveled at the splendor of a musical journey that was kinetic and vertiginous, and those for whom the musical gestures were lost in the flurry.

Certainly no one in attendance could deny the beautiful resonance Glennie stirred from the marimba in the middle of the second half, but unforgettable moments like these between both artists remain floating in the memory in a sea of mystifying gesticulations and discrete interludes. Glennie and Frith concluded the evening with a folksy vamp — the most consonant moment up to that point — and received fervent accolades from those who had seen the light from the first notes, and quizzical recognition from those who had to wait until the end for the lights to be turned on.