Amanda Gookin was the only performer on the stage at National Sawdust on Wednesday evening, but nothing about the event felt solitary. The sound of her cello was rarely heard alone, instead augmented by electronics, her voice, and elaborate visual projections. The audience was seated at small round tables, a spatial arrangement that encouraged mingling among concertgoers.

Gookin’s performance, significantly, was the result of a collective endeavor. The evening marked the debut of her Forward Music Project, a group of seven pieces for solo cello composed by women and inspired by social issues affecting women and girls. Commissioned by Gookin, all seven works received their world premieres on Wednesday. The concert also marked the kickoff of National Sawdust’s Spring Revolution, a month-long festival of concerts and events focused on women, empowerment, and activism. 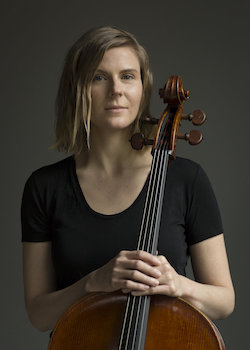 The program unfolded continuously, without any intermission or pauses. Each piece began with a prerecorded introduction, in which its composer described the social issue that motivated her work. These women’s voices functioned as aural program notes (the program did not include written ones), detailing the context for this music’s creation.

The first piece, Nathalie Joachim’s Dam Mwen Yo, brimmed with sincerity, offering an affecting meditation on family, gender, and the composer’s Haitian roots. Gookin’s cello sung here as one voice among many, and poetic images, by S. Katy Tucker, enhanced the narrative, creating a multilayered sonic and visual world.

In contrast, another of the program’s most riveting works was noticeably pared down. Morgan Krauss’s insistently abstract memories lie dormant: they are reviled before they are revealed, performed largely without visual accompaniment, was strewn with fragmented lines that evoked Anton Webern in their minuteness. Gookin skittered her bow across the strings of the cello, punctuating the instrument’s notes with sharp exhalations of breath.

As the work’s emotional intensity increased, she smacked the instrument sharply, and pleaded wordless syllables. The narrative arc implied the occurrence of something unspeakably painful, yet declined to let the listener know exactly what that was — as if the trauma were still too raw to explain.

Less opaque were Allison Loggins-Hull’s Stolen, with heartbreaking text by a Yemeni girl forced into marriage as a child; Amanda Feery’s Stray Sods, a mournful meditation on Irish women who travel overseas for medical care due to the country’s restrictive abortion laws; and Angélica Negrón’s Las Desaparecidas, about victims of human trafficking and gender-based violence. While they told emotionally forceful and patently urgent stories, these works somehow felt over-explained and, as a result, less musically captivating. At the end of the concert, Jessica Meyer’s Swerve was a cathartic burst of energy.

Consistently self-possessed, and alternately delicate and fierce in her musical approach, Gookin displayed impressive reserves of emotional and technical energy. A co-founder of the pioneering PUBLIQuartet, she is an experienced commissioner and performer of new music, and she appeared eminently comfortable with her role at the center of this endeavor.

In Leila Adu’s gorgeous For Edna, Gookin sings the phrase, “You are not alone.” Coming as it did toward the end of the program, the line struck me as doubly resonant. On the one hand, it offers comfort in community, emphasizing the promise of working collaboratively to effect social change. On the other, it seemed like an admonishment: How easy it is to act as if we are alone, to recuse ourselves from the overwhelming array of problems that this music engages. In a recent interview with the website I Care If You Listen, Gookin alluded to this very tension: “I have become increasingly frustrated at this feeling that classical musicians should not push identity politics, that you never know who you may offend,” she said. “It is my hope that being an ally, actively listening, speaking out for the marginalized in our country, and sharing my truth will challenge and encourage others, classical musicians included, to get charged up to do the same.”