The New Century Chamber Orchestra has a hankering to do odd things that small string orchestras don’t normally do — like play the piano accompaniment for a set of Schubert lieder. It did this in its latest set of concerts around the Bay Area. I heard Friday’s performance at the First United Methodist Church in Palo Alto. 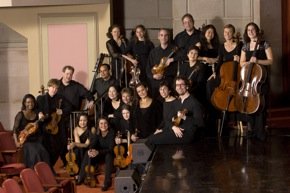 The Schubert was arranged by Clarice Assad, NCCO’s resident composer-arranger and the wizard behind some of NCCO’s previous clever stunts. (I remember with particular fondness a strings-and-percussion orchestration of Mussorgsky’s Pictures at an Exhibition.) Setting Schubert’s repeating figures and pregnant chords for strings produced effects alternately reminiscent of lush Tchaikovsky romanticism, cool Scandinavian modernism, and Philip Glass minimalism.

Soprano Melody Moore seemed not at all disconcerted to be backed by 18 string players instead of one piano. Her strong voice rode out into the church with ease, and was well-balanced with the orchestra. She has a classic operatic delivery: Her tone is rounded and stately, with a wide, consistent vibrato, and she knows all the tricks for eliding unpleasant phonemes out of the way to leave the sound beautiful while still getting the words across — particularly helpful in a harsh consonantal language like German. The result somewhat resembled a recital of opera arias. Moore took these songs at a deliberate pace and with cool emotion. Her Gretchen in Gretchen am Spinnrade wore an expression of deepest sorrow, rather than tearing about in dramatic agony. There were no sforzandos where Schubert didn’t mark them. That didn’t prevent the high A’s in the last verse from pulsating out with great power. Although Moore has a low voice for a soprano, the top of her range is the strongest part, and she exploits that nicely.

A similar grace and artistry, downplaying the drama, attended An den Mond, D. 296, and Sehnsucht (one of several Schubert lieder by this evocative title — the word roughly means longing, but is not really translatable; this was the Johann Gabriel Seidl setting cataloged as D. 879, as described in the program notes, and not the Schiller setting announced in the concert listing). This approach worked particularly well with the other, earlier setting of Goethe’s An den Mond, D. 259, a plain, largely strophic song sometimes dismissed as unvaried and uninteresting. In this performance the simplicity gave Moore ample opportunity to be straightforwardly charming, curving the line and rounding out ornaments with grace. Moore has performed with NCCO before and will be well worth seeking out again.

The other weird thing that NCCO played at this concert was Mendelssohn’s Octet. It’s common enough for a chamber string group of this size to play an orchestration of a string quartet. With four or five players to a part, it changes character to an orchestral work unambiguously. An octet, though, gives only two players for most of the parts in an ensemble of 18. Even with three violinists playing the first violin part, and the single bass joining two of the cellos, this performance hovered in an uneasy way between orchestral and chamber sonorities. When the parts came together, there was an orchestral strength outdoing anything Mendelssohn’s prescribed eight players could have produced. At the next moment, though, a chamber sonority could sound thin by contrast. Was Concertmaster Nadja Salerno-Sonnenberg playing the first violin part by herself, or were the other two violinists in the same part chipping in? By sound alone it was sometimes hard to tell.

As an interpretation, the Octet matched the Schubert lieder: not particularly slow, yet cool, without a particular bent toward either high drama or Mendelssohnian fleetness. The finale came serenely coasting down the pike rather than roaring up to the finish line.

The remaining piece on the program was Bach’s Violin Concerto in E Major. Here, too, the orchestra kept the energy flowing smoothly, except on a couple of occasions when the players came to a complete halt at a break point in the middle of a movement, and then started up again as if they were beginning over. Throughout, they produced a warm, woody tone. Salerno-Sonnenberg was the soloist, and here, as often with her solo performances, a listener just has to accept her startlingly inconsistent style. Shifting unpredictably from woody tones, like the orchestra, to stringy and even metallic, at some moments dry and thin, at others thick and warbly, Salerno-Sonnenberg took her idiosyncratic way through Bach.