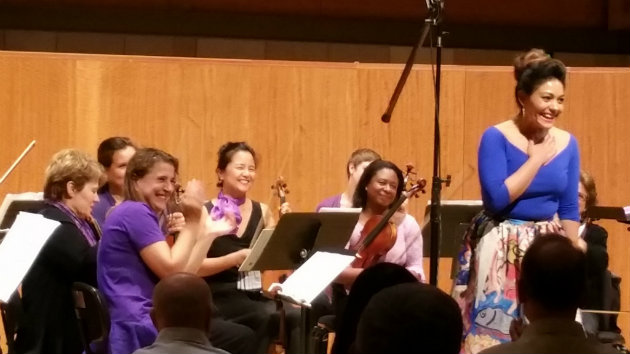 The New Century Chamber Orchestra has another, high-profile musician as its featured composer for the year and they chose an interesting way to introduce her at last weekend’s season-opening concerts.

Jennifer Higdon — whose breakthrough orchestral work, blue cathedrals, has been performed hundreds of times by American orchestras (and has a whiff of Copland’s Americana in it) — is drawn to American roots music. Bluegrass is specifically the subject of her Concerto 4-3, written for the string trio Time for Three, her Pulitzer Prize-winning Violin Concerto has a last movement based in folk fiddling, and the Grammy-winning Percussion Concerto works its way through a lot of popular styles and idioms, including a cadenza that partly references the epic drum solos of 70s rock. And folk styles are also present in her first opera, Cold Mountain, which premiered this past summer at Santa Fe Opera.

But Higdon also has a love of mystery, and works like blue cathedrals and the Percussion Concerto begin with weightlessness and indefinite gestures that gradually cohere like high-valence elements. It was either that quality of mystery, or the desire to set Higdon’s music off by contrast, that led New Century Chamber Orchestra to program mostly Russian music on the program’s first half. Or maybe it was a form of musical detente?

The Saturday, September 19, concert at San Francisco Conservatory of Music started with Arvo Pärt’s Trisagion, based on an Eastern Orthodox Christian hymn. Pärt is Estonian, not Russian — but let’s not quibble over artistic license. Dour harmonies in rhythmic unison gradually built up intensity. The powerfully mysterious piece reached a climax when the instruments ditched the dissonant harmonies and coalesced into a unison phrase spaced over four octaves. Soprano soloist Ailyn Pérez, sang the wordless melody with pure, heartfelt emotion. Pérez glowed on stage and lent the orchestra a calming elegance.

This haunting introduction set the stage for a most beautiful and moving performance of Sergei Rachmaninoff’s Vocalise. Soprano soloist Ailyn Pérez, sang the wordless melody with pure, heartfelt emotion. Pérez glowed on stage and lent the orchestra a calming elegance — a contrast to conductor/player Nadja Salerno-Sonnenberg’s on-edge music making.

The mini Higdon festival in the second half opened with “Strings” from her Concerto for Orchestra. It’s an energetic scherzo spun from basic scale patterns, beginning pizzicato and building out to a full dance tune on bowed strings. The middle section stops time briefly, until the scales and dance tune come back full force. It’s pleasant stuff and exciting, but it doesn’t leave much of an impression.

“String Lake” from All Things Majestic, a musical meditation on Grand Teton National Park, is a lyrical slow movement that begins forthrightly with a beautiful tune scored for the lower strings and works to an effortless climax. To the Point is an orchestration of a movement from Higdon’s Fourth String Quartet, commissioned, as it happens, by the Cypress String Quartet in 2003 as part of their Call & Response series. Responding to Debussy’s interest in gamelan music, Higdon extends the timbral palette of the strings to generate more percussive sounds, but at the same time weaves four separate melodic ideas together. At only four minutes long, this is an impressive feat of condensed musical argument in which not a second is wasted or a note misplaced. Its dynamism showed off the orchestra to best effect.

The New Century Chamber Orchestra performs with an energy you don’t always find at concerts. Infused with overdrive enthusiasm by Nadja Salerno-Sonnenberg’s hyper-effusive playing and conducting, musicians were literally jumping out of their seats, smiling, and staring with wide-eyed, reverential, if somewhat apprehensive looks at their leader. The orchestra is at its best when the music calls for high-octane playing, as in To the Point.

After Higdon, it seemed fair to bring out the Russian eclectic spirit, with Dmitri Shostakovich’s Elegy and Polka. The orchestra was able to instantly switch between lugubrious and sardonic as well as between 19th-century Romanticism and 20th-century dissonance. As an encore, later the orchestra went with a polka by Alfred Schnittke, a composition even more darkly humorous than Shostakovitch. It featured a snazzy solo by principal violist Anna Kruger.

Perez returned to the stage for Tchaikovsky’s “Letter Aria” from his opera Eugene Onegin in an arrangement for string orchestra by Clarice Assad.  Plunging into the middle of an opera without context she created nowhere near the magic she made in the Vocalise. But then, the surrounding music didn’t really set you up for Tchaikovsky’s anguished, innocent, 19th-century teen.