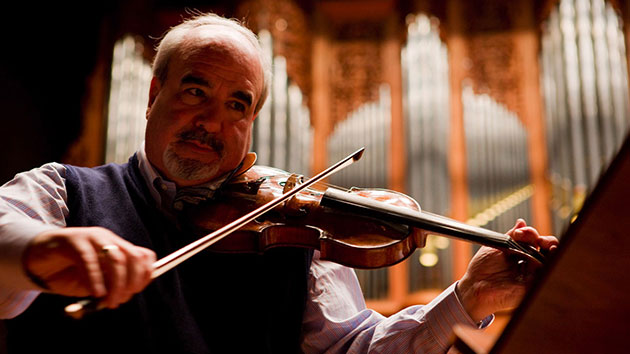 The New Century Chamber Orchestra presented some of the most delightful and appealing music ever written for string orchestra at its concert in the First United Methodist Church of Palo Alto on Friday. Glenn Dicterow led the conductor-less ensemble from the concertmaster’s position, a place he’s used to as the recently retired concertmaster of the New York Philharmonic.

The tone for the evening was set with the opening work, Mozart’s Divertimento in D Major, K. 136. This almost impossibly tuneful little sinfonia was played briskly, without lingering. Trills were crisp and snappy. Distinct alternations of dynamics in repeating phrases, whether the score called for it or not, contributed to a pointed and intense performance.

While a bit dry for Mozart, this style of playing became pleasingly appropriate for the fast movements of Gustav Holst’s St. Paul’s Suite, a work written for the student orchestra at the girls’ school where the composer taught. Strong emphasis on accents and a dry, stark sound to Dicterow’s solos kept the folk-influenced music jaunty. A kinship with Holst’s Arabic-influenced music became apparent.

This was especially marked in the Intermezzo movement. It’s written as an Andante con moto song with sudden outbreaks of a Vivace reel. This performance revved up the tempo so that the Andante was no slower than the Vivace. Instead, the separation was marked by a distinct pause before returning from the reel to the main song.

The highlight of the concert was unquestionably the least-known piece on it, the Nordic Melodies, Op. 63, by Edvard Grieg. Some of Grieg’s other music for strings is more often heard, and understandably so, as the folk-like melodies in this work can become a bit wearying in repetition, in a less committed performance than this one.

NCCO Music Director Nadja Salerno-Sonnenberg, who also leads from the concertmaster’s seat, tends to conduct lightly when she’s not playing, by nods and gestures to the other sections. Dicterow went in for none of that. He treated the entire orchestra as a chamber group, attending to coordinating his own part with others’ and letting them do the same.

This was particularly notable in Grieg’s complex scoring. There are places where the second violins, violas, or cellos lead or even play unaccompanied. Whoever was in the prime position at the start of a movement or section gave the opening cue, and Dicterow, if his part was silent at the moment, just let them do it. How much rehearsal was responsible for the resulting coordination, I do not know. The results, however, were deeply impressive.

The string orchestra pieces occupied the first half. The second half was devoted to a true chamber work, Johannes Brahms’ String Sextet in B-flat, Op. 18. I had wondered if NCCO would present an orchestrated version. That would be a bad idea with this work, whose texture lies so much in its solos.

That did not happen. Dicterow, principal second violinist Candace Guirao, and two each of violists and cellists presented this as the sextet that Brahms wrote. Technically, they were excellent, though not always as secure as in the larger works. Principal cellist Michelle Djokic’s solos, loud and intense, jumped out like cloudbursts. Her colleague Robin Bonnell – an excellent continuo player in Baroque music – gave a secure bass. Violists Anna Kruger and Cassandra Lynne Richburg charmingly intertwined their lines.

The tempo and the resulting interpretive style, however, were less charming. Brahms went at the same brisk clip as Mozart and Holst. This made a decent fit with the quality of the writing in the brief Scherzo, which moved along like wild clockwork. It did not, however, work for the rest of the Sextet. The reflective mood and the poignancy essential to Brahms’ character, even in his faster tempos, were completely absent, even when most needed.

The performance seemed to have only one goal, and that was to charge ahead and get the darned thing over with as quickly as possible. It took, in fact, about 33 minutes, breakneck speed for a piece that usually runs 37 or even 40 minutes. There’s no point in playing Brahms at all if he’s going to be treated so dismissively. I preferred this evening’s Grieg, which is where the artistic commitment lay.