Of all the orchestras that regularly make the Bay Area concert circuit, one chamber orchestra truly plays at a higher level than the rest. The New Century Chamber Orchestra has always been one of the area's better ensembles, but under the direction of Nadja Salerno-Sonnenberg, NCCO leaves others in the shade. Each section of the all-string orchestra plays with unity of body movement, breath, and bow control. The effect of their current concert set is jaw-dropping. And it's not necessarily tied to the pieces they played 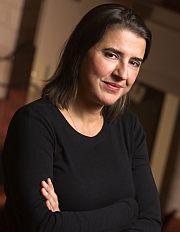 On rare occasions, string quartets achieve this sense of unity. Each section of the NCCO coalesced around a distinctly established section leader — each section like one player, the whole ensemble like a huge quartet, plus bass. In the absence of a conductor, the section leaders have a great degree of freedom while the rest of the section is able to concentrate on reading the gestures of their leaders rather than also watching the conductor.

Orchestra playing can be a battle of egos, but Salerno-Sonnenberg had the members of the orchestra with her completely. She walked onstage with a polite smile that soon gave way to an intense, no-nonsense expression. Dark eyebrows furrowed and sleeves rolled up to the biceps, she assumed a stance of powerful concentration, capturing the attention of orchestra and audience members alike, before releasing the tender sounds of the second movement of Elgar’s Serenade for Strings. She led with her bow, shoulders, and facial expressions. But she’s not the only one who leads. At any given moment, a network of glances and gestures tie the music together — a community of musicians constantly communicating with each other and having a great time at it.

After the opener, the orchestra realigned into a string-quartet-plus-orchestra formation that produced a whole new dynamic. This time Dawn Harms was at the helm of the orchestra with Salerno-Sonnenberg, Candace Guirao, Cassandra Lynne Richburg, and Susan Babini as the featured quartet in Elgar’s Introduction and Allegro. They played with breathtaking passion. Though the communication flowed in different paths, the excellent sense of ensemble was maintained even as the solo quartet took rhythmic liberties. 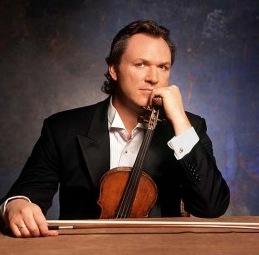 After intermission, Mark O’Connor’s Elevations received its world premiere. The new composition, by the orchestra's featured composer, inhabits O'Connor's well-known sound-world: a middle-ground between rustic American folk fiddling and a Coplandesque cleanliness and openness of harmony. O’Connor writes in the program notes:

“The complexity of indigenous American string music is often overlooked; mastering the techniques required to perform it well is an immense challenge to string players irrespective of training. Elevations offers classically trained musicians, in particular, just this challenge — and those who overcome it unlock the door to a compelling American musical world.”

Although he makes a valid point, the actual composition and its performance fell short of unlocking an American folk sound. The orchestra still played in conservatory-classical style that sometimes sounded like an Elgar or a Tchaikovsky serenade. Though the composer writes idiomatic slides and pens improvisatory-sounding lines, the fact that all of the music was written down, meant that the spontaneous element of improvisation that gives folk music its spark was missing and the border between genres was not really crossed. Instead, a new hybrid style was maintained that was beautiful and interesting in itself, just not revelatory.

The concert ended with Schnittke’s comical, spooky, and profound Moz-Art à la Haydn. In this extraordinary composition, short fragments from Bach, Mozart, Haydn (and possibly others), come in and out of focus, gradually blending with Schnittke’s dissonant harmonic language. Every time a quotation arises, the audience is compelled to giggle an acknowledgement of recognition. As if all this weren’t enough, musicians have to whistle, twirl in place, and bob up and down; in the first moments of the piece the musicians played in darkness. Schnittke may be up to something well beyond pure fun. What exactly? Perhaps he is poking fun of or protesting the formal charade of the concert-going experience or highlighting classical music’s obsession with the past.

For a while it seemed NCCO had capitulated to the need for a baton-wielder in this complex piece. But it finally became clear that the conductor (Dawn Harms) was part of the act. As in Haydn’s Farewell Symphony the musicians leave the stage one by one, though here they do so while still playing. In the end, the conductor demonstratively snaps the baton in two — the perfect metaphor for an orchestra that has reached amazing heights by ditching the baton.