Big Hits From the 50s
By Michelle Dulak Thomson ,

New Esterházy Quartet
Comments
The principal delight of the New Esterházy Quartet’s two-year trek through the complete Haydn string quartets has been hearing the works that never get played. The NEQ’s first CD of recordings from the series stuck to the earliest clutch of quartets, the ones eventually called Opp. 1 and 2. The group’s second disc, though, is titled Big Hits From the 50s — meaning not the 1750s (when some of those early quartets might have been written) but rather the opus numbers in the 50s — Opp. 50, 54, and 55, which embrace 12 quartets, all of them among Haydn’s finest. 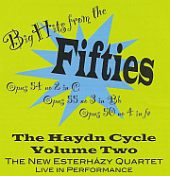 None of them is particularly well-known. The common wisdom is that hardly anyone programs a Haydn quartet unless it has a nickname. This particular dozen has three nicknamed quartets in it (“The Dream,” “The Frog,” and “The Razor”), though the NEQ disc contains none of these.

Of the three scandalously underplayed pieces that are on it, the one listeners are most likely to have heard before is the C Major Op. 54/2, which is the kind of work that a certain sort of quartet might program even after repeated warnings that it’s bad box office. It features an amazing slow movement — a repeated theme over which the first violin plays a series of apparent improvisations — and a slow finale, interrupted by a fast section. In the slow parts of the finale, the first violin has the theme, but under (and over!) it the cello plays vast, slow arpeggios that go way up into the violin range.

Op. 50/4, in F-sharp Minor, turns up on programs much less often, possibly because it’s fiercely uncomfortable to play. The key is nasty for string players, and the music sits ill in the hand. Still, the thing is an outright masterpiece, from the taut first movement to the double-variation slow movement to the grim fugal finale.

Op. 55/3, in B-flat major, might be the least familiar of the three, which is a shame. There’s a lot to love here, beginning with the questing opening phrases, and going on to the serene slow movement (decorated with first-violin filigree); the Trio of the Minuetto that takes up the ending tag and makes an entire new dance of it; and a finale that cascades joyously from above, starting with the first violin and soon bringing in everyone.

I had a few reservations about the NEQ’s first CD. About this one I have none. The performances are all that we who have followed the quartet (and its players) would expect. There is the pleasure in inflection that I’ve always heard from this quartet. No repeat is allowed to go unvaried — not as to notes (I didn’t hear anyone ornamenting anything here, and indeed it would be nearly impossible to do so), but instead in terms of dynamics, inflection, voicing, balance. These are players who figure that if you are to play something three times over, there ought to be some purpose in it.

I would like to give credit to particular violinists for particular turns of phrase, but the NEQ (where Kati Kyme and Lisa Weiss alternate as first and second violins) refuses on principle to tell me who played what. I can credit Anthony Martin’s deft viola and William Skeen’s deliciously resiny cello, which rises to frightening heights at the end of Op. 54/2, but underpins everything else with a sort of urgent solidity.