For three years after its founding in 2006, the New Esterházy Quartet pursued a single vision: to perform all 68 of Joseph Haydn’s quartets on period instruments. But, as it turns out, once was not enough for these determined performers. Having completed its ambitious goal in late 2009 (becoming the first North American quartet to do so), New Esterházy is now going another round with Haydn, this time pairing his music with other composers who dedicated quartets to him. 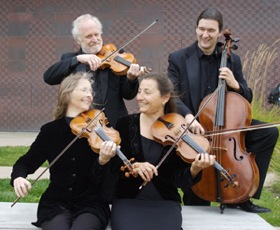 Saturday’s performance at St. Mark’s Lutheran Church in San Francisco marked the third iteration of the ensemble’s “Dedicated to Haydn” series, linking Haydn with Mozart and the lesser-known French composer Hyacinthe Jadin. The quartet’s members (violinists Lisa Weiss and Katy Kyme, violist Anthony Martin, cellist William Skeen) are longtime friends and collaborators, and their camaraderie clearly showed in the program, marked above all by exceptional unity of purpose and total commitment to their interpretive schemes.

As the program’s cornerstone, Haydn’s Quartet in E-flat Major, Op. 33, No. 2, “The Joke” proved a terrific opener. The first-movement Allegro moderato was both refined and restrained, its procession of subtle gestures occasionally interrupted by virtuosic bursts of energy from Weiss. The ensuing Scherzo revealed more vivid contrasts in New Esterházy’s smooth yet spirited performance. A haunting intensity in the third-movement Largo e sostenuto, pairing first the viola and cello and then the two violins, gave way to an easy, graceful finale. And though most of the audience surely knew when to expect this quartet’s eponymous joke (a deceptive stopping-and-starting conclusion), New Esterházy nevertheless told it well.

Pity the obscure Jadin, victim of two devastating strokes of bad luck in his short lifetime. First was the onset of the French Revolution, which hindered his career prospects just as they began to take flight. The second (and fatal) blow was the onset of tuberculosis, which claimed the composer’s life at age 24. Jadin’s Quartet in F Minor, Op. 1, No. 3, a colorful and highly original work, offered some tantalizing hints of what this promising young talent might have accomplished.

The opening Allegro moderato immediately strikes the listener with its intensity and melodrama, though it was a series of gentle, exquisite back-and-forth motives between first violinist Kyme and cellist Skeen that proved most captivating. A gloomy cast hangs over Jadin’s curious Minuet, peppered with melancholy lines of unison writing. In the ensuing Adagio, New Esterházy infused the songlike main theme with great warmth while fluidly incorporating the movement’s quicker motives. Jadin ends his quartet with a highly unusual Polonaise, charmingly rustic in nature, which New Esterházy played with delicate buoyancy.

Mozart was, of course, among Haydn’s most ardent admirers, and his Quartet in E-flat Major, K. 428, pays homage to Haydn’s “Joke” with its own final-movement pauses, among other elements. New Esterházy gave this piece an enlivening performance, imbuing the first-movement Allegro ma non troppo with exceptional fluidity and polish. The gentle melodic phrases of the ensuing Andante con moto emerged with flowing grace, placed atop an accompaniment as thick as taffy and just as luscious.

The quartet’s feisty rendition of the Menuetto pleasingly contrasted ponderous gestures with more sprightly fare. Yet its greatest dynamism came in the closing Allegro vivace, where madcap episodes collide against moments of restraint. Here New Esterházy flexed the full powers of its imagination, its highly vivid interpretation unleashing the movement’s potential for expressive contrast.