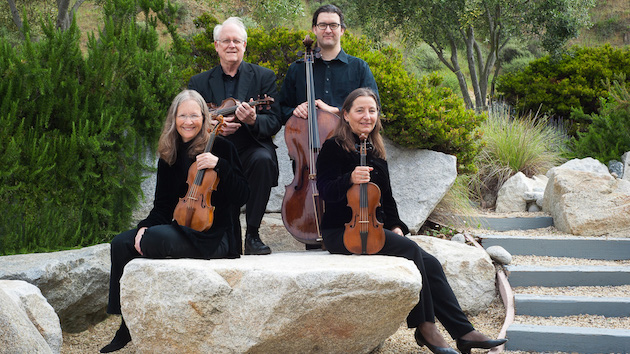 The New Esterházy Quartet, which has been traversing the output of Franz Joseph Haydn, his friends, and his pupils, decided for its concert on Saturday afternoon, Sept. 17, to celebrate the friendship of Haydn and Mozart by playing one early and one late string quartet by each. This homage was performed in the fervently bright acoustics of the tiny, 50-seat chapel of the First Unitarian Universalist Society in San Francisco.

This program of four quartets turned out to be a large meal to swallow. In a successful attempt to keep the concert under two hours in length, the players cut most of the repeats, even some from the minuet movements. This sounded a little odd, but if it kept the performance, and the listeners’ ears, fresh, it was worth the effort. Mozart’s Quartet in D Major, K. 575, at the end of the program sounded as charming and Mozartean as the Quartet in A Major, K. 169, at the beginning. 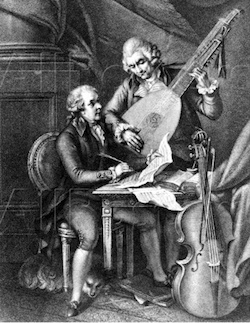 Indeed, one of the pleasures of the program was noting how Mozartean K. 169 was, how many of Mozart’s characteristic stylizations of melody and harmony he’d already fully developed at the age of 17 when he wrote this, in 1773, as one of a set of six quartets in response to Haydn’s recently-published Opp. 17 and 20 sets. It was his own voice, though, and quite distinct from Haydn’s. Haydn’s individual style is not as strongly flavored as Mozart’s, though it’s also recognizable, more in form than in color. Esterházy violist Anthony Martin suggested that Haydn is earthenware and Mozart is crystal, a good analogy.

The early Haydn on the program was one of those that had inspired the early Mozart, Op. 17, No. 4, in C Minor. Haydn liked to include one minor-mode quartet in each of his sets, and this was from the height of his Sturm und Drang period, making it almost violently emotional, especially in the outer movements. It was, however, easy to hear the stylistic resemblance between this and the wise, sophisticated late Haydn offering, Op. 77, No. 2, in F Major, his last completed quartet, from almost three decades later, in 1799.

Indeed, the quality of the composition and of the performance combined here to make this the outstanding work of the afternoon, particularly the quiet dignity of the stately melody in the Andante theme and variations, and the enormous high energy and drive of the Vivace assai finale.

Despite the tendency of early quartets to be concertante works for first violin plus ensemble, even in Haydn’s Op. 17 there are plenty of quick solo interjections by other instruments and duets for various pairs. The New Esterházy players’ highly articulated and discrete style brought out the Baroque roots of the music and ensured that each different duet had its own tone. The opportunity for solos by the lower instruments was taken furthest in Mozart’s K. 575, which was written in an unsuccessful attempt to appeal to the king of Prussia, who was a cellist. Mozart may have anticipated taking the viola part himself (it was his favorite instrument to play in quartets), as there are plenty of solos for that as well.

In the New Esterházy ensemble, Katherine Kyme and Lisa Weiss trade off the two violin parts. Kyme and violist Anthony Martin play with mellower voices than the steelier ones of Weiss and cellist William Skeen, which was particularly apparent with the chapel’s acoustics. The clarity and distinct audibility of the group’s style allowed Skeen to keep the bass line lively, interesting, and – the necessary precursor for these – audible. Weiss in the second violin part would also peep out noticeably. The sense of a string quartet as a conversation was strong in these performances of chamber music in a chamber small enough to let the sound fill the room fully.