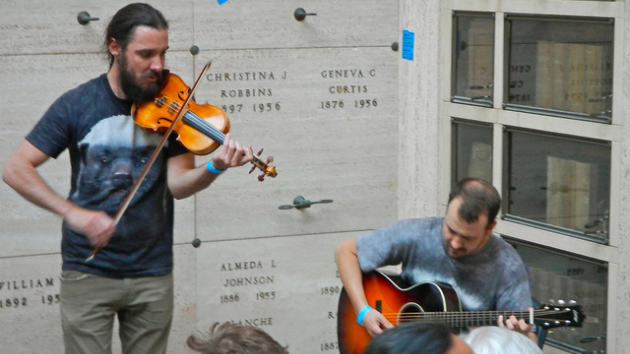 The Garden of Memory is a test of willpower — an immersive experience, more than a concert in the traditional sense. This summer solstice extravaganza, hosted by New Music Bay Area at Oakland's Chapel of the Chimes, features more than 40 performing groups and soloists, playing simultaneously for four hours over the stretch of the entire building and grounds. Choosing to watch one performance, you'll miss another — it's a constant balancing act.

Initiated by pianist Sarah Cahill in 1996, the Garden of Memory takes place in various nooks of the labyrinthine building, which, under the direction of Julia Morgan and other architects, transformed from a streetcar station into the largest above-ground cemetery west of the Mississippi. The abundance of natural light, bountiful floral arrangements, and poetic room names (The Court of Quietude, the Sanctuary of Dawn) imbue each performance space with an air of enchantment.

With so many performers occupying the same (if sprawling) space, some bleeding of sound was inevitable. Yet, most of the performances were remarkably contained; on more than one occasion I turned a corner and suddenly found myself occupying an electronic installation I hadn’t anticipated. Trying to see all of the 42 performances proved daunting, so I took to wandering, letting my ears guide my experience.

This wandering sometimes caused me to miss out. Several hours in, I came across the Garden of Eternal Wisdom, where a visibly-moved crowd listened with rapt attention to the performance of Sicilian multi-instrumentalist and composer Laura Inserra. But I came too late, catching only the final notes of what I’m sure was a magnificent performance.

In the mean time, I was lucky to see Probosci — the impeccable duet of violinist Timba Harris and guitarist Gyan Riley — play a quirky, rhythmically-driven improvisation. Later, I circled back in time to the hear the end of the set, a rousing piece resembling bluegrass.

Then, drawn to the mellifluous string sounds coming from the Palm Garden, I discovered the trio of cellist Dylan Mattingly and violinists Alex Fager and Eli Wirtschafter. These performers were among the youngest of the event and played with unpretentious enthusiasm.

John Bischoff immediately drew me in with his composition Chapel Delay. He invited passersby to play the just-intonation keyboard, creating looping variations on top of rhythmic patterns that triggered bells distributed around the space. Over at Maggi Payne’s installation, I watched as curious toddlers and adults alike experimented with playing the theremin.

Downstairs, the Chimes Chapel provided a more traditional concert setting. I claimed some pew space in order to watch percussionist William Winant’s compelling performance of Frederic Rzewski’s To the Earth.

Feeling overstimulated, I was grateful to stumble upon the Court of Quietude, where the Cardew Choir was leading a performance of Pauline Oliveros’s The Heart Chant. Forming a circle that could be entered or exited freely, the people sang long tones on “Ah” while placing their right hands over their hearts.

Oliveros’s New Age sentiments are not always to my taste (the score of The Heart Chant includes her characteristic musings: “Can you imagine that the heart energies are joining together for healing yourself and others?”), so I was surprised to feel deeply affected by the singing. But in fact, when the singers’ pitches coalesced into resonant fifths and major chords, I realized that the piece perfectly captured the spirit of the event: people of all ages and walks of life, momentarily coming together to create new musical experiences.

Heading outside to the Pacific Plaza, I walked past the Lightbulb Ensemble, whose refreshingly innovative performances challenge conventional notions of how gamelan music should sound. I paused to hear the Orchestra Nostalgico perform a peppy rendition of Ulla’s dance music from John Morris’ soundtrack to The Producers. Then I was gone — until next year, that is.