To most Americans, Christopher Columbus is known as the "discoverer" of our part of the world. Less commonly understood is the land from which he came, an environment rich in culture but beset by violence and religious intolerance, a legacy that Columbus' arrival in the Americas would perpetuate.
The complex strains of Spain's multicultural heritage formed the backdrop to Hespèrion XXI's stunning presentation Saturday at Berkeley's First Congregational Church, under the auspices of Cal Performances. Directed by the incomparable Jordi Savall, Hespèrion XXI's sterling instrumental corps and singers from the Capella Reial de Catalunya offered a feast to the senses, and a scintillating array of musical styles accentuated by Savall's colorful arrangements of this little-known repertoire. 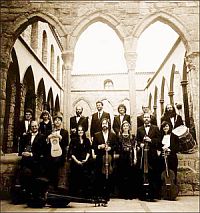 The program, titled "Christopher Columbus: Lost Paradises," exploited the unique blend of Christian, Arab, Jewish, and Native American musical influences that characterized Spain at the transition from the 15th to the 16th centuries. It was a potent mixture of dramatic readings, instrumental songs, and vocal music, easily qualifying as a highlight of the season.

Several historical readings, narrated in English by Nestor Serrano and in five other languages by Manuel Forcano, created a panorama of Spain's glorious victories and humbling defeats. Solo melodies underscoring the readings often reflected the nature of the text — a Sufi improvisation for descriptions of Moorish splendor, for example, or drum patterns for militaristic tales. Song translations projected onto the church's back wall ensured spectators' rapt attention, while a cross perched just above this projection added unintended layers of symbolic meaning to certain texts.

A solemn procession by flutist Pierre Hamon and percussionist David Mayoral introduced the opening invocation, Gilles Binchois' Tethysque novos detegat orbes (Thetys will reveal new worlds). This mystical prophecy, delivered with foreboding by the four male singers of the Capella Reial, alternated with verses of another piece, the anonymous Nunc iam cessit pontus (Now the oceans have been tamed), sung by the inimitable Montserrat Figueras with velvety tone and consummate elegance.

The impudent Dindirindin, where a nightingale is instructed to inform a man's lover that he is already married, accompanied a narrative of Columbus' marriage. Hespèrion XXI captured both the elegance of this song's verses and the vigor of its sprightly refrain. Josquin des Prez' In te Domine speravi (In thee, O Lord, I have put my trust), performed with ardent sincerity, was paired with the story of Columbus' request for royal patronage of his voyage.
Musical Depictions of a Key Year
Several momentous events of 1492 were presented in vivid detail. The Christian conquest of Granada in that year prompted Juan del Enzina's Qu’es de ti, desconsolado? (What has become of you, disconsolate one?), a passionate entreaty for the conversion of Granada's Moorish king, which was suffused with an ominous, almost threatening tone. Tenor Lluís Vilamajó's fiery delivery of the meandering vocal lines, combined with Savall's masterful viola de gamba interjections, made for a compelling performance. The jubilant celebration that followed, Enzina's Levanta Pascual que Granada es tomada (Get up, Pascual, Granada is taken), took on a more sobering quality in this light.

The year 1492 also marked the expulsion of all Spanish Jews who did not convert to Christianity. Johannes Cornago's solemn hymn Patres nostri peccaverunt (Our fathers have sinned) featured majestic solos from Vilamajó and countertenor David Sagastume. In one of the program's most haunting moments, a menorah was placed at the front of the stage as Serrano proclaimed the Edict of the Expulsion of the Jews, Forcano read the Aramaic prayer Ha lahma ‘anya (This is the bread of affliction), and the four Capella Reial singers formed a circle around the menorah to sing a dirgelike Sephardic tune on this same text, bathed in darkness. Figueras' quietly agonized delivery of Mà aidej? Mà adamélaj? (To what shall I liken you? With what shall I compare you?), a Sephardic lament on Jerusalem's fate, completed this eloquent depiction of sorrow.

Forced conversion of those Jews and Moors remaining in Spain, meanwhile, inspired their own threnodies. Mezzo-soprano Begoña Olavide offered an impassioned performance of Ya muslimin qalbi (Oh, listen!), an Arabo-Andalusian lament tinged with labyrinthine melodies and a baleful quality. Sorrow among the Christian realm was reflected in Enzina's Villancico titled Todos los bienes del mundo (All worldly things), a meditative reflection on the fleeting nature of earthly life, sung here in commemoration of Queen Isabella's death.

The ensemble acknowledged the third consequential event of 1492, Columbus' sighting of the New World, with a vivacious instrumental Fantasía of Luys del Milán. The proclamation of Moctezuma II as emperor of the Aztecs was observed with pulsating Amerindian music, beginning softly and steadily in flute and percussion before bursting into a torrid blaze. An uplifting Quechua hymn, Hanacpachap cussicuinin (Joy from Heaven), showcased the blending of Christian and native traditions, while the rousing chaconne A la vida bona (To the good life) of Joan Arañés concluded the evening on an optimistic note.