One word best sums up Friday's collaborative performance of Chanticleer and the Shanghai Quartet at Berkeley's First Congregational Church: work. Everything from the choice of works in the program to the enthusiastic work put in by the performers onstage simply "worked" well.
Due to the nature of the pieces performed and precious little explanation from the stage, however, the audience had to put in a bit of work to take in the music. But the task was not too difficult; the sincerity with which both ensembles offered music to a full house of equally enthusiastic listeners was not unlike the gratifying messages one normally expects from a church's pulpit. 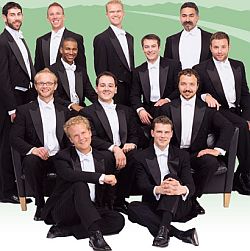 The program began with a song cycle for mixed choir and string quartet, titled From the Path of Beauty by acclaimed composer Chen Yi, who was in attendance. The premiere of Chen's work had occurred the night before and, if her body language indicated anything as she took her seat moments before the house lights dimmed, Chen was pleased and eager to hear her work realized for only the second time.

The program notes explain the cycle as a journey "through the history of beauty in Chinese arts, from the ancient totems to the figurines, from poetry to calligraphy, from dance to music — from the thoughts to spirit." Its seven songs ("The Bronze Taotie," "The Ancient Totems," "The Rhymed Poems," "The Clay Figurines," "The Secluded Melody," "The Dancing Ink," and "The Village Band") were each imbued with characteristics suggested by their titles, though the extent to which each piece is programmatic was not obvious.

Chen's writing is engaging, and straddles a line between a 20th-century soundscape — with jagged dissonances, volatile textures, and contemporary performance techniques for string instruments and voice — and a more olden and, perhaps to some listeners, foreign musical world. 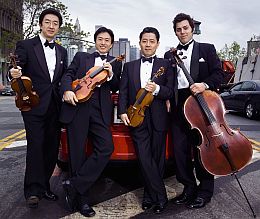 Performing alone in the first song and along with the string quartet in four others, Chanticleer was entrusted with elements of traditional Chinese folk music and performed its parts — made up of nonsense syllables and, at times, vocal effects — with conviction and precision. The Shanghai Quartet blended exceptionally well with the choir and, in turn, played with gusto when brought to the fore.
Covert Melody
The highlight of Chen's composition came in the performance of the fifth song, "The Secluded Melody," which featured both ensembles. A beautiful arioso melody in the violins is paired with a solemn, Palestrina-like choral texture in the first section; a strong rhythmic pulse drives both quartet and choir in the second section; and the song culminates in a lyrical third section where what could be perceived as the clandestine melody is openly exchanged, in fragments, between members of the quartet.

The second half of the program featured choir and quartet separately. Chanticleer took the stage first, performing three works by Ligeti (Pápainé, Idegen Földön, and Magány) and one by Ravel (an arrangement of "Soupir" from Trois Poèmes de Stéphane Mallarmé by Clytus Gottwald). Matthew D. Oltman, Chanticleer's assistant music director and a tenor, offered brief remarks about Pápainé, but, without so much as a word toward the remaining pieces by its composer, the otherwise remarkably attractive songs were barely distinguishable from each other solely by virtue of their Hungarian poetry.

The brilliant voices of sopranos Michael Match and Michael McNeil and alto Cortez Mitchell stood out, yet the arrangement of Ravel's "Soupir" (originally for solo voice and chamber orchestra) most completely exploited the truly orchestral timbre and luxuriant resonance of the ensemble.

The Shanghai String Quartet completed the program with Ravel's String Quartet in F Major. I greatly appreciated how well the members of Chanticleer work together by seeing, immediately afterward, the intimate and intense exchange of the Quartet. The first movement opened at a fairly brisk tempo, but the tenderness of Ravel's writing was clear by the tempo change in the middle of the movement, and the Quartet remained brilliant until the final dramatic notes of the piece.

A testament to the success of Chen's work and that of the ensembles came after they all took their bows, and after the gratifying applause and standing ovations. Chanticleer and the Shanghai Quartet endearingly performed arrangements of three traditional Chinese folk songs, also by the composer of the evening, Chen Yi. Oltman announced the titles of the three works, and the audience acknowledged the work he put into their pronunciations with appreciative giggles.