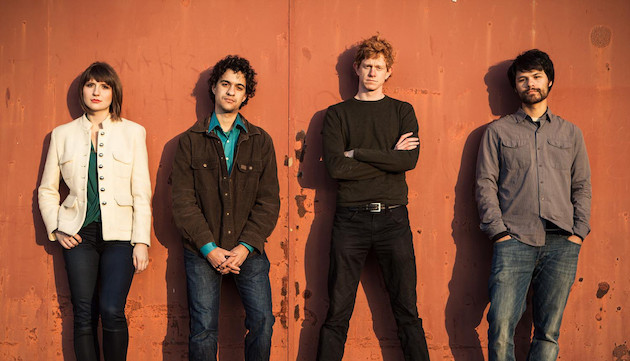 Andy Akiho doesn’t look like a composer. A DJ, maybe. Or perhaps a hip-hop producer or even a member of a boy band — although he’s pushing 40, he looks an eternal 25. As he took the stage of Noe Valley Ministry church on Sunday to introduce the San Francisco premiere of his Piano Quintet, the Noe Valley Chamber Music audience couldn’t help but laugh and smile at his friendly, sprightly demeanor. 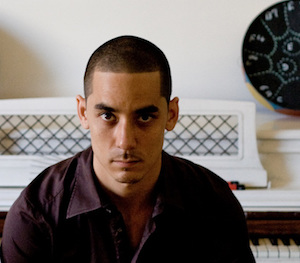 The composer’s youthful vigor surges through his music. And though Akiho may not be a pop musician, he draws heavily upon contemporary dance music, convincingly combining it with classical influences (notably Bartok), without having a computer involved at all.

Akiho’s quintet, titled Five Prospects of a Misplaced Year, was composed for the San Francisco-based Friction Quartet, joined by pianist Jenny Q. Chai. Over the course of four retreats, the musicians met with Akiho to plan the new work, tailoring the musical material to the players’ strengths and tastes — Akiho likened it to Duke Ellington composing for his band members. Each of the five movements is dedicated to a separate member of the ensemble, resulting in a highly personalized composition that musicalizes a close-knit friendship.

The title of the first movement, “The War Below,” is a play on violist Taija Warbelow’s last name. She opened the movement with an aggressive ostinato motive punctuated by prepared-piano noises from Chai. Plunks and clicks produced by placing sticky tack on the piano strings mimicked the timbre of gamelan gongs, steel drum, and electronically produced sounds. (One recurring blip had me on edge as it sounded too much like a Windows error message). Warbelow, and later the other members of the quartet, added their own pops and snaps using various pizzicati and bow-tapping techniques to form a complex, interlocking web.

The tumultuous first movement gave way to a nocturnesque second movement, titled “Matchbook Aria” after cellist Doug Machiz. Chai introduced a slow, bare-bones riff consisting of a skeletal rattling noise and drip-like tones while the violinists and violist played ghostly harmonics on a theme reminiscent of Schubert’s “Death and the Maiden.” Out of this eerie nightscape emerged a plaintive lament from Machiz. Yet what could have been a haunting cello solo began to stagnate — Machiz played expressively, but the melody meandered too much and ultimately collapsed upon itself. Akiho is a master of timbral and rhythmic invention, but has trouble evoking subtler emotions.

This was also true of the fourth movement, “Palindromic Queue” (a pun on Chai’s middle initial). Chai’s piano melody relied too much on repetitions of single pitches, quickly growing more tedious than dreamy. It also ended enigmatically, with a thick question mark of a chord. The quintet sounded awkward ending here, but this is because Akiho has yet to complete the final fifth movement.

Akiho made up for the weaker sections with the dynamic central movement, “KinEtic VarIatioNs” (for violinist Kevin Rogers). The composer treated the quintet like electronic music software. Ostinatos suggesting the momentum of electronic dance music were layered, looped, and remixed. A younger generation of composers — notably Gabriel Prokofiev, Mason Bates, and Ted Hearne — have sought to fuse music of the concert hall with EDM. What sets Akiho’s hybrid experiments apart is that he evokes contemporary club music without actually utilizing electronics. The result is a more cohesive musical language, without the friction between electronic and acoustic elements that often plagues the music of his peers. 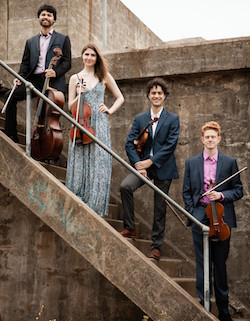 Some of the same fusion techniques made their way into the concert’s encore work, Akiho’s 2011 In/Exchange for string quartet and steelpan, which was played by the composer himself. It was shocking how ably Akiho integrated this percussion oddity into the sound world of the string quartet. At the beginning, the solo part emerged almost organically out of an intense high-register passage in the quartet. An instrument heard only in Caribbean music was transformed in this new context. Like the prepared piano, it called to mind electronically produced sounds, especially since Akiho is such a virtuoso, capable of producing lightning-quick runs that seem computer generated. He even bobbed up and down like a club DJ, only the track he mixed would likely terrify a seasoned raver. The piece is a relentless dance of death, a thrilling, orgiastic frenzy that doesn’t let up, until the stabbing, Morse-code figure that brought the piece to a close.

The concert opened with a spirited performance of Robert Schumann’s 1842 Piano Quintet. In a touching introduction, violinist Kevin Rogers explained his deep connection to the piece, as his mother, like Schumann, suffered from schizoaffective disorder. Rogers likened the little notes his mother would write in his journal to the therapeutic letters between Schumann and his wife Clara. This colored the ensemble’s reading of the famous second movement, which Rogers pointed out is not actually marked as a funeral march. Instead, Rogers saw it as a reflection of the Clara-Robert correspondence, and the recurring march as a depiction of “Schumann walking day to day with this feeling of melancholy” balanced by the comforting voice of Clara.

This dialogic interpretation made its way into the performance, as Rogers played the march as a kind of recitative, incorporating speech-like element into his playing. He shaped the first violin line so that it seemed to pose questions, whisper secrets, raise protests, and falter in resignation. It was an intensely personal performance — the kind you can only experience within the intimacy of chamber music.