San Francisco Conservatory of Music is a school. Everybody knows that. Except that on Sunday afternoon, as the students performed two one-act operas, there was no sense of  it being a “student performance.” This was the second of two double-cast shows in the Conservatory Concert Hall, on Friday and Sunday.

Fully produced, with a student orchestra on fire and the singers performing wonderfully well, the event was a stunner, not needing any caveats. Of the many memorable experiences at the Conservatory over the years — Simon Rattle and John Adams conducting, Thomas Hampson and Elly Ameling giving masterclasses — this was among the best.

Jose Maria Condemi, the Conservatory’s director of opera and musical theater, is responsible for the unusual selection: Massenet’s Le portrait de Manon and Puccini’s Suor Angelica, a French rarity and the middle piece of Il Trittico. Condemi was also the stage director. The impressive, imaginative sets (on what must be a limited budget) were by Steven C. Kemp; costumes by Kristi Johnson.

Le portrait is the 1894 sequel to Massenet’s 1884 Manon, a simple story about the old des Grieux (Jarrett Porter) standing in the way of the romance between Jean (Camille Sherman in the trouser role) and Aurore (Marina Hogue). The fourth principal, Tiberge, is the young lovers’ benefactor, acted with comic genius by Ente Chang.

The music is ultraromantic, with Massenet quoting himself liberally. Under the direction of Curt Pajer, the Conservatory orchestra performed with passion and excellence. Concertmaster Rachel K Clement led the small group of violins, which produced a big, beautiful sound, and she also had a gorgeous solo passage.

The challenge to the young artists was even greater in the overheated Puccini, a melodrama exploding in a convent where life otherwise is claustrophobic and extremely regulated. A dozen singers — some playing principal roles at the Friday performance — formed the chorus of nuns, Erykka Ximóne was the Abbess, and Marina Davis was the Mistress of Novices.

And then there were the two big roles. 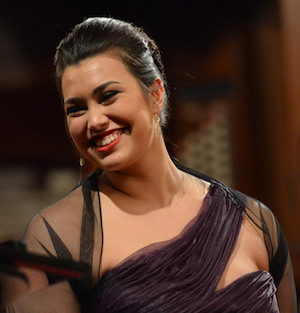 Jasmine Johnson was the cruel Princess, Angelica’s aunt, one of opera’s worst villains, who seems to take pleasure in destroying the woman who lost everything to “pay for her sin” (a child out of wedlock), and both vocally and dramatically, Johnson created a character you want to celebrate by booing loudly.

New Zealander Isabella Moore was the spine-chilling Angelica, her voice cleaving the concert hall, her agony palpably real. Puccini’s drama is borderline excessive here; the role tests even a seasoned pro. Here at the Conservatory, Moore, Johnson, and the entire production lived up to standards well beyond academia.