Mezzo-soprano Kindra Scharich and pianist Jeffrey LaDeur save the best for last in To My Distant Beloved, their new Schumann/Beethoven CD. It’s more than worth the wait.

Not that there’s any reason to dismiss how this MSR Classics disc begins, with an expressively varied and often poetic performance of Beethoven’s precocious An die ferne Geliebte (To my distant beloved, 1816). Generally regarded as the path-finding first song cycle by a major composer, the six songs explore the speaker’s longing for an absent lover. Mournful moods play off against spry and even playful musings. After a somewhat pedestrian start, and despite some self-conscious tempo shifts, the singer and accompanist find the musical colors and emotional valences of the songs.

Able and engaging as the Beethoven cycle is, it doesn’t prepare the listener for the depth and breadth of what’s to come in Schumann’s Frauenliebe und Leben (A woman’s love and life, 1840). In a lustrous, moving performance of this widely performed cycle, Scharich and LaDeur pull off the alchemical wonder that a sequence of lieder can achieve.

Here, in settings of eight Adalbert von Chamisso poems that survey love in multiple hues and aspects, this account of the great cycle is both exquisitely detailed and beautifully molded to the contours of its titular theme — a woman’s love and life. Words and music merge and seem inevitably joined. Singer and pianist commune. The sum effect is at once utterly natural and arrestingly fresh.

It begins right away, when Scharich, singing in German, brings a kind of becalmed acquiescence to the love-swept mystery of the opening lines: “Since I saw him I believe myself to be blind.” The level tenderness, buoyed by wisdom, reaches its peak at a false cadence that resolves in a bittersweet return to the song’s beginning.

Scharich delivers the heavenly metaphors of the following song with a kind of plain-spoken modesty that amplifies the rapture. She and LaDeur conspire in the bewitching dream of “I can’t grasp it, nor believe it” with a sly, furtive ease, enhanced by lithe rubato. It’s the art song equivalent of a dance in the moonlight.

And so it goes. With the fifth song, a giddy strophic celebration of sisterhood on the eve of wedding, the cycle takes a short breather. What follows in the final three songs is truly remarkable, a feat of musical and dramatic transformation.

When Scharich sings of a beating heart, in “Sweet friend, thou gazest,” her voice seems to come from a great distance, as if she were envisioning the migration of passion and connection in her own life. In a meditation on motherhood, her voice takes on a thicker texture, which suggests a time passing and passing on to child. Finally, in a concluding number, fresh pain is rendered with a blend of agony and resignation. LaDeur, sensitive and responsive throughout, gives the Schubertian piano lines a fitting, patient poignancy to frame this last glowing panel. 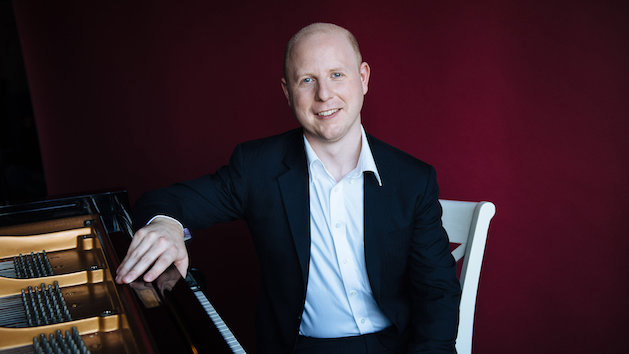 Marooned between these two song cycles is a long solo piano work, Schumann’s C-major Fantasie. While the impulse to program for contrast is understandable, this fervent and heroically scaled work makes a discordant fit between the two song cycles. LaDeur’s brawny, disjointed performance does not help the case for including the work.

Misgivings vanish with the Frauenliebe und Leben that follows. The songs, some as fleeting as a minute or two and none longer than six, may not take up much clock time. But in their assured, intuitive performances, Scharich and LaDeur create a rounded universe of a woman’s fierce and loving attachments.