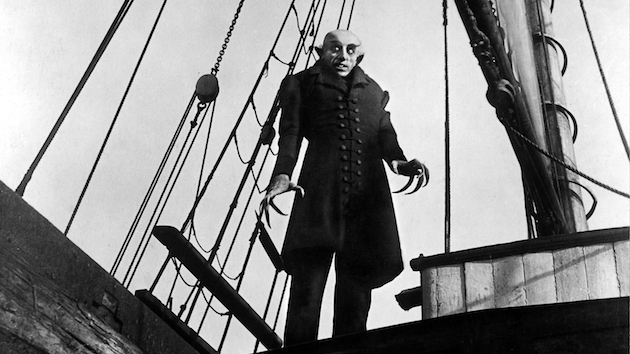 Movies never really were silent. Whether it was a solo pianist sitting in the shadows of a cabinet size “flicker” theater or a multi-piece orchestra performing in the pit of a movie palace, there was always musical accompaniment.

Few films could afford the luxury of commissioning a composer to create an original score, so the music tended to be a pastiche that borrowed a little Wagner here, a little Liszt there. The idea was to use the music to reinforce whatever mood or action was happening on the screen, whether if was a posse of galloping horses, a dreamy eyed romantic interlude, or the creepy interior of a haunted castle. 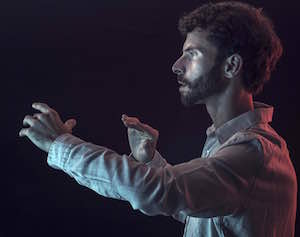 All these traditions came together this Halloween when Los Angeles Opera presented a ghoulish evening of delights featuring a screening of F.W. Murnau’s 1922 Nosferatu accompanied by a new pastiche-score (subtitled “A Symphony of Horror”) for piano, chamber orchestra, and soprano composed and assembled by Matthew Aucoin.

The setting could not have been more lavishly appropriate — the recently restored 1927 UA Alhambra Theater on Broadway now known as the Theatre at Ace Hotel. The audience was also in keeping with the event’s trick-or-treat timing, featuring an assortment of Grim Reapers and cloaked Draculas, an elegant Nick and Nora Charles couple, a Frida Kahlo lookalike, members of the Addams Family, and an Indiana Jones (me) complete with leather jacket and whip.

In his introductory notes, Aucoin (who is beginning a three-year tenure as L.A. Opera’s Artist in Residence) wrote:

We composers are often told that new music is scary. And we waste a lot of breath trying to convince people that it is NOT scary. Well, this time, I wanted to embrace music’s power to terrify, to repulse, to thrill, to make the hair on the back of your neck stand on end.

At the same time, in keeping with the pastiche tradition, Aucoin interspersed his own music with ample snippets from Arnold Schoenberg’s Pierrot Lunaire and Verklarte Nacht; Wagner’s Tristan and Isolde; Schubert’s Gretchen am Spinnrade; Carl Maria von Weber’s overture to Der Freischütz; and a pair of songs by Alexander Zemlinsky: Maiblumen blühten überall and Waldegesprach.

Back in 1922 there actually was an original score composed Hans Erdmann for Nosferatu, but it has long been lost. And while it is unlikely that music of Schoenberg and Zemlinsky ever accompanied the film, the German Expressionist movement and composers of the Second Viennese School certainly were important to the filmmaker, Murnau. 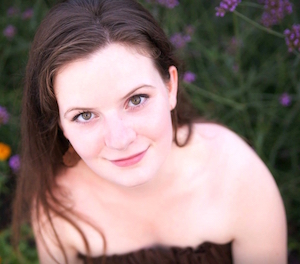 For many in the audience, who came expecting the sort of hootalong experience synonymous with a midnight screening of The Rocky Horror Picture Show, the serious nature of the music and the unquestionable power of Murnau’s film (with a few notably campy exceptions) must have come as something of a surprise. They kept looking for opportunities to laugh and mock the movie, but those rarely came. Instead we found ourselves engrossed in Nosferatu’s genuine sense of horror, its visionary film techniques, and the beautifully nuanced impact of the musical accompaniment, performed by 15 members of the L.A. Opera orchestra and soprano, Liv Redpath.

Aucoin was asking a lot of Redpath when he expected the soprano to be equally comfortable interpreting the sprechgesang of Schoenberg, the lilt of Schubert’s lieder, and have enough left in reserve to end with the “Death and Transfiguration” aria from Tristan. But Redpath did admirably, especially in the sections from Pierrot Lunaire.

Aucoin’s original music flowed seamlessly in and out of the musical quotations. Sometimes it was as spare and ominous as a repeated muffled pulse in the percussion, reminiscent of John Williams’ approaching shark motif from Jaws. At other times, it employed lusher, romantic sonorities and vibrations in the high strings (think Bernard Herrmann) to create just the right atmosphere of edginess and menace as the grotesque figure of Max Schreck (as the bloodthirsty Count Orlock), with his pendulous fingers and bugged-out eyes haunted the screen.

For his entrance Aucoin came on stage in a cloak worthy of Bella Lugosi. But he soon shed it so he could move comfortably between his conducting role on the podium and his place at the keyboard. His most ambitious musical (and instrumental) contribution came in “Act 4,” when Aucoin provided a lengthy solo piano accompaniment that included improvisations on his own themes. Ironically, this use of a solo piano provided some of the most powerful musical associations of the performance.

When it ended, the full house of Halloween revelers spilled out onto the street and disappeared into the night. Perhaps it was the beginning of a tradition, as last Halloween, as part of its “Off Grand” series, L.A. Opera offered a similar evening that featured Philip Glass’s score to Dracula. For Aucoin his next assignment will be at the Dorothy Chandler Pavilion where beginning Saturday he will conduct the company’s highly anticipated production of Philip Glass’s opera, Akhnaten.