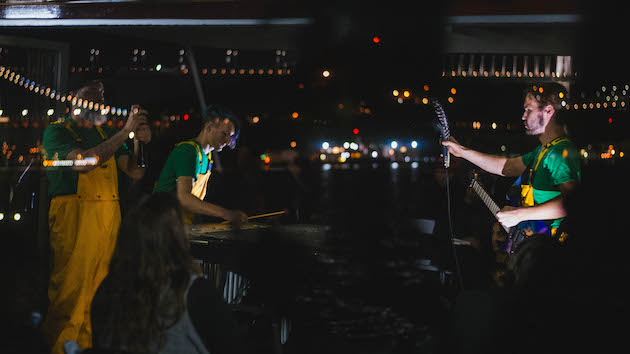 On November 11, Luciano Chessa served me the worst cup of coffee of my life. Fortunately, it was on a yacht, with a 360-degree view of the San Francisco skyline. The ocean is the backdrop of Squeeze! Squeeze! Squeeze! (2012), Chessa’s hour-long multimedia work on Moby Dick, written for and performed by The Living Earth Show: duo Travis Andrews (electric guitar) and Andy Meyerson (vibraphones).

The excerpt describes, in rapturous and reverent tones, Ishmael’s squeezing of solidified whale “sperm” (actually spermaceti, the waxy substance inside the sperm whale’s head) back into liquid: “Squeeze! squeeze! squeeze! all the morning long; I squeezed that sperm till I myself almost melted into it; I squeezed that sperm till a strange sort of insanity came over me; and I found myself unwittingly squeezing my co-laborers’ hands in it.” 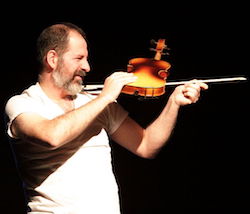 It would be reductive to call these elements merely playful. In a thought-provoking written statement, Andrews and Meyerson acknowledged the fragility of Chessa’s music as dependent on human response. Confronted with strange scenarios, listeners may suspend their expectations and open themselves up to the enjoyment of these new sounds — or they may judge the performance within their current system of values.

Chessa’s music, in fact, had a polarizing effect on the musicians who played in the retrospective show last April, at Yerba Buena Center for the Arts (which involved, among other things, the toothbrushes, spinning tops, and musicians covered in bed sheets). To some of my colleagues, the mere inclusion of these wacky elements was enough to render invalid any compelling aspects of Chessa’s writing. Others were thrilled by his adventurous spirit. 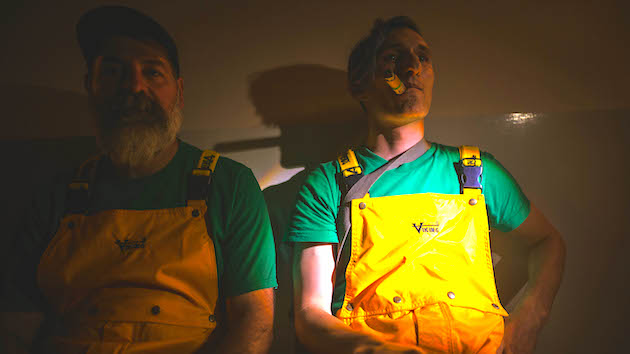 Indeed, the strangeness of Squeeze! Squeeze! Squeeze! is no small thing. Andrews and Meyerson continually wander off set, prompting audience members to wonder aloud if they should follow (I trailed Meyerson to a bench on the boat’s lower level, where he smoked a cigar). Traditional concert etiquette doesn’t provide for the observation of such extramusical elements, and though Meyerson had encouraged the audience members to move freely about the boat, crossing the central performance space felt awkward even when the musicians weren’t there.

But Chessa’s intent isn’t to alienate his listeners. Meville’s text is “fundamentally about brotherhood and universal connections,” he said — no different, really, from the “All men will become brothers” of Beethoven’s Ninth. Though Chessa’s recitation of the text is often unintelligible from the feedback of phone receivers and other amplified props, he gestures to the audience as he implores, “Come; let us squeeze hands all around.” At the end of the piece, each audience member knots a short rope to his neighbor’s, forming a collective chain. 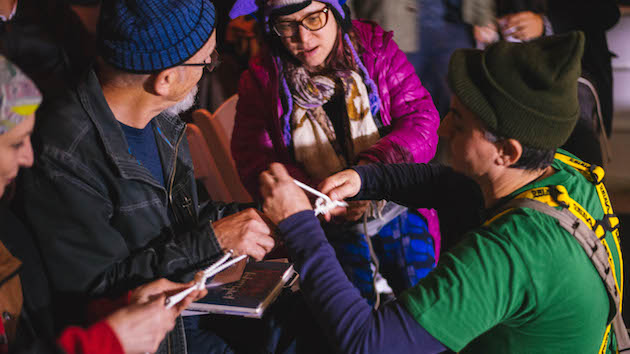 There’s an intimacy between the performers, as well. In the ambling first section, Andrews and Meyerson’s spiraling solo lines meet in struck clusters; then, the duo faces each other, leaning in as they coordinate impulses. What initially seems like a reprise of the opening material becomes frenzied as it climbs in pitch and volume, and the duo convulses in fff throbbing unisons, which gradually slow and soften, like a racing heartbeat returning to resting rate.

So much in the piece is pleasurable. Through pitch-bending and an EBow (a handheld electromagnetic string driver) Andrews emulates ocean swells and the bird calls Ishmael might hear from the deck; in the end of the work, Meyerson plays a quarter-tone lullaby.

As for the charge of gimmickry? I certainly enjoyed the ocean air, and the idea of taking coffee during a performance (if not the actuality of Folgers instant). Through Ishmael’s squeezing, Melville writes, the globules discharge “all their opulence, like fully ripe grapes their wine.” And if the audience member can surrender himself to the embrace of the proverbial whale sperm, Chessa’s riches come forth.