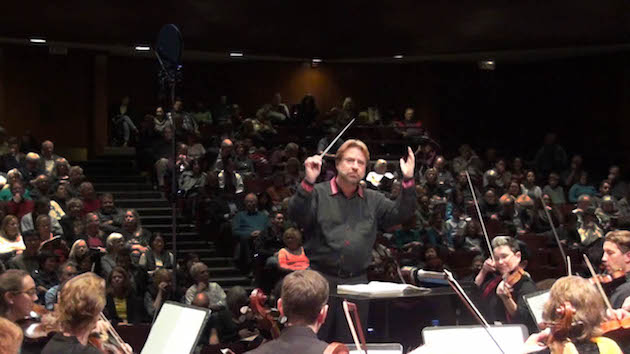 Redwood Symphony’s concert at the Cañada College Main Theater on Saturday (Nov. 23) was a grab bag of short pieces. Most were written within the last 20 years, and all have the aim of communicating directly and accessibly with the intelligent listening audience. The one older piece on the program is a classic of 20th-century populist composition, Aaron Copland’s El Salón México.

This is a favorite Copland work of Redwood’s music director, Eric Kujawsky (a.k.a. Eric K). It’s always a treat when Dr. K conducts music he really likes because he is able to communicate to his volunteer musicians his full appreciation of the work, which consequently comes out with unusually clear freshness and coherence. For a piece inspired by dance hall music, El Salón México has an odd tendency to grind to a halt whenever the dynamics go quiet. It didn’t in this performance. The musicians’ energy sailed through the quiet sections and built the piece up into a shapely whole. Though there were a few spots where the rhythm got off track or the sound turned gritty, for the most part this was a crisp, snappy, and fully admirable rendering.

The two larger and more clangorous recent compositions on the program came out similarly. Carnival Fever by Cynthia Lee Wong is an eight-minute essay in loud, chittering, and chaotic sound. Clicks, squeals, and other exclamations litter the landscape. Trumpet solos in jazz style, some muted and some not, dominate the top of the ensemble, while string lines moving slowly in a harmonic succession reminiscent of Vaughan Williams pin the sound down from underneath. This is a highly challenging work to play, and a few difficulties were audible, but enthusiastic drive dominated.

The same was true of The B-Sides by Mason Bates, whose music is frequently played by Redwood. This is a suite of five brief and varied pieces. The orchestration is bright and shimmery, with much wind and percussion overlaying a relatively motionless string base. Repeating motives flash over and run past each other in different instruments. Each movement is different, but all share a continual rapid-fire shimmering nervousness, combining sheets of continuous sound with pulsating stasis derived from repeating patterns. It sounds a lot like John Adams. Many younger composers write this way, but Bates shows more assurance, skill, and taste than most. Bates’s trademark electronic sounds in several movements were not allowed to get in the way of the orchestra’s music.

The concert was filled out with two pieces of film music, a genre that has been turned to by many contemporary composers seeking a venue for direct accessibility. A kind of house style has developed in recent orchestral music for dramatic films — a sweet-toned, contemplative, and wistful neo-Romanticism. Both scores on the program partook of this style, though the composers showed individual differences as well as considerable skill in their idiom.

There is an inherent problem with playing film scores of this kind as concert music. Having been written to underpin the mood in a drama, they need to avoid being so interesting as to distract film viewers. This makes the music sound vacant of sinew at a serious concert, but this problem may be evaded by keeping the selections brief. These two lasted about six minutes each, which was brief enough, and the orchestra played both well.

One piece was from Rachel Portman’s music for The Cider House Rules, an extreme embodiment of the genre’s typical contemplative wistfulness and its propensity to lay down a mood which remains unalterable. Portman commands other styles, but this music is entirely typical of her film scores. In particular, especially for its use of winds, it sounds completely interchangeable with her Academy Award-winning work for Emma a few years earlier. 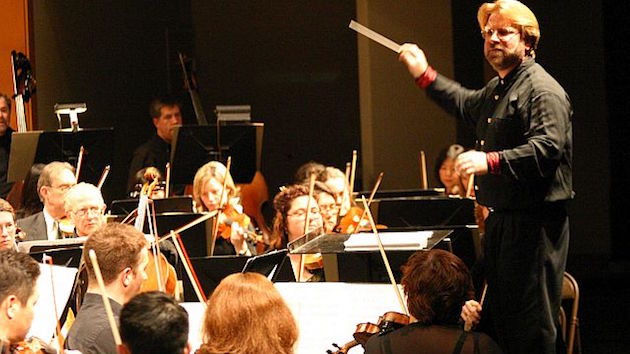 The other piece was from Alexandre Desplat for The Shape of Water, the more recent of his two Academy Award-winning scores. Desplat writes that, in keeping with the story in the film, he composed music that he tried to make sound immersed in water. To represent the South American origins of the film’s creature, he added a bandoneón, the large concertina popular in Argentina — particularly for tango music — though there’s no suggestion the creature ever had anything to do with such a device or even came within two thousand miles of one. Out of its movie context, the wafting melody in a strong triple-meter dance rhythm with prominent bandoneón — represented here by an electronic keyboard — sounds more like Parisian café music than anything else.

These additions filled out the potpourri bag well enough, but the value of this program lay in its purpose-written concert music.