What does it mean to be an American? This question — provoked by the Oakland East Bay Symphony’s concert Friday — people have been asking in this country from jump, and we have in our collective memory a wide array of answers. Of course, to qualify the question we must understand what an American is in the first place, and here’s where things always become tricky. We all seem to know that to be an American is to expect just as much difference as similarity from your fellow citizen in lived experience and personal outlook. It’s precisely the degree of that difference that has led to both conflict and progress in this society. 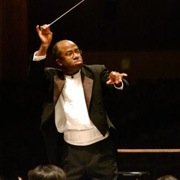 The arts have long been a domain in which American identities have been defined and redefined, proposed and contested (you’d think that the sheer diversity of perspectives in American art would force those with a narrower perspective to reconsider). And music has perhaps been the most idealized medium in the expression of diverse voices.

This question — what does it mean to be an American? — was asked aloud, musically, and with a sense of humble urgency, by conductor and Music Director Michael Morgan and his OEBS, with their program at the Paramount Theatre titled “Views of America.” On Friday’s program were staple pieces by Charles Ives and Duke Ellington, two American composers who might not share a chapter in the music history textbooks. These more-known works flanked an original, commissioned work by the pianist, composer, and bandleader Rebeca Mauleón that engaged the frequently undertold Afro-Cuban roots of American music, while simultaneously reminding listeners that American identity neither begins nor ends in the U.S.

The first view of America came in the form of Ives’ Symphony No. 2, a very early 20th-century work that, as Morgan forewarned the audience, incessantly quotes familiar tunes (or familiar-sounding ones). A New England ode to American folk melodies and late-German Romanticism, Ives’ Symphony is of a specific time and place — and sounds that way. It’s difficult to ignore the composer’s agenda of elevating what he perceived to be indigenous American musical artifacts to high art by channeling them within the context of a symphony, though the Oakland East Bay band performed Ives’ efforts with sincerity. The interesting thought experiment at hand — what would it sound like to express American folk idioms in the European art-music genre par excellence? — was intuitively understood by both Morgan and the orchestra; the brass bellowed in their contribution to bringing out the drama of the work’s inner and final movements, while the strings swelled in an absorbing, cantabile vibrato during the work’s more turgid moments.

In response to Ives’ thought experiment was the final view of America for the evening: Ellington’s Harlem, a work that literally embeds a jazz orchestra within a symphonic one, the latter supporting and expanding motivic ideas and gestures introduced by the former. Whereas Ives sought to elevate folk idioms, Ellington seemed convinced that the true essence of his art was closer to the ground, in the sounds, spirit, and folklore of his adopted cosmopolitan hometown. Interestingly, Ellington’s work also reflects an America of a particular time and place, but perhaps one that modern ears can hear more easily than they can the more preservationist-sounding Ives. The gusto with which the orchestra played Ellington’s piece seems to have reflected this understanding. After all, there’s something to hearing a native speaker carry on in conversation, and the reed and brass sections of the OEBS spoke “Ellingtonia” fluently and artfully. 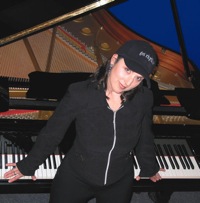 In more ways than one, Rebeca Mauleón’s Suite Afro-Cubano occupied a middle place. With the composer herself at the piano, the work was not really a concerto, nor did a unified orchestral voice define the sonic texture. Instead, the piece was characterized by movement: from orchestral section to piano to orchestral section, to and from different rhythmic foundations, and across a number of definable musical forms, such as flamenco, sacred lucumí drum patterns, the danzón, the familiar cha-cha-chá and mambo. As is true for so much Afro-Cuban music from the son montuno onward, jazz harmony is the lingua franca through which Mauleón expresses all the ethnic and cultural idioms that make up the musical narrative of the work — from the lost voices of native caribeños, to the inculcated Spanish and hybrid-African traditions, and, finally, to the cultural mélange that is classic Afro-Cuban music. In a brief cadenza, Mauleón traversed the octaves of the piano with modernist, quartal jazz harmonies that implied harmonic movement and stasis at the same time — a deft metaphor on her part.

Although Mauleón rightly celebrates the cultural diffusion that so typifies music on this side of the Atlantic, there’s still much more to be explored under the surface of the rich tapestry of motifs that is her Suite Afro-Cubano. Agreed, music in the Afro-Cuban style is but another ingredient tossed into the pot that musicians in the U.S. have been stirring for more than century. And Mauleón and the Oakland East Bay Symphony have asked an all-important question that we, as a society and a culture, have yet to deal with seriously. With each piece on this program (Ives, Mauleón, Ellington), the question was asked again: What does it mean to be American, musically? What goes into picking out cultural motifs that we preserve and elaborate on in our modern music? Are we comfortable with our differences, and can we celebrate them together, as a unified society? What might that society look like? It might look more and more like the audience that came out on Friday night, intrigued that the question was being asked in the first place.