He and his ensemble have been programming contemporary works and presenting them in mostly masterful fashion. And their musical menus have tended toward the hip and ethnically diverse, in keeping with their city’s demographic. 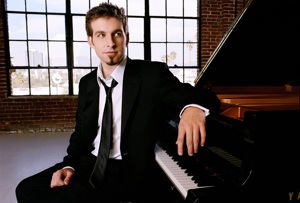 Of course, you can’t expect all recipes to succeed equally, in musical terms. But on last weekend’s program, Conga for Orchestra, by contemporary Uruguayan composer Miguel del Águila, was a tasty opener, with the orchestra’s percussion section bolstered by the title drum, claves, and metallophone. Águila’s playful approach to Latin rhythms evoked Aaron Copland’s El Salon Mexico, spiced up with whistles and tweets and jazz-flavored voicings, and his mix of sounds was often affecting, with a whiff of the nostalgia of a Nino Rota movie soundtrack. But, like many moderns, Águila never achieved, or didn’t bother to achieve, the strength and definition of Copland’s melody lines. Still, the piece served to showcase the individual and collective fineness of the OEBS sections, and it won warm applause from the audience and from Morgan for his soloists.

Choices for the evening’s two sets of “Jazz Selections” were apparently decided at the last minute, and so were announced from the stage. Both were arranged by Jason Eckl and featured Paula West on vocals and Taylor Eigsti on piano, two performers who came up in jazz as Bay Area youngsters and went on to greater fame in New York and beyond.

The first jazz set presented two songs by Cole Porter (You Got That Thing and I’m in Love Again) flanking one by Rodgers and Hart (Isn’t It Romantic?). The three proved increasingly well-suited to West’s ingenuousness and theatricality, which have gained her acclaim in cabaret venues. With an orchestra behind her and a big hall in front, though, West’s voice, while admirable in diction and phrasing, was sometimes overwhelmed. Eigsti, wearing an eye-catching white jacket and fedora, has worked with Frederica von Stade and Sylvia McNair, as well as in numerous jazz ensembles, and he proved a powerful and fluid accompanist. But the jazzman’s ability to swing established a standard not easily attained by those in the orchestra who were made to solo in Eckl’s arrangements.

After the songs, Eigsti and jazz drummer Eric Harland occupied center stage for the world premiere of their Courage, subtitled as a “tribute to the victims and survivors of the Japanese earthquake and tsunami.” Their piece started with an alluring, Brittenesque string theme and proceeded with considerable attention to texture but, again, not much to melody. Even more so than with Águila, the affect was rather like that of an orchestral soundtrack, waiting for some kind of dynamic action. (Eigsti has in fact composed for the recently released film Detachment.) Both of the co-composers worked in attractive solos for themselves, and I would have preferred more, particularly from Eigsti. The nearly full house rewarded them with a curtain call before dispersing for intermission.

The piece served to showcase the individual and collective fineness of the OEBS sections.

On their return, the approving throng was treated to the oldest and most “classical” piece on the program, Rachmaninov’s Vocalise. Reduced to chamber size, the orchestra gave perhaps the most engaging reading of this familiar piece I’ve ever experienced — buoyant in the violin section, wonderfully warm in the lower strings, with lyrical support from the woodwinds. Morgan’s maintenance of shape, so evident in his handling of this, may be one of his ensemble’s most endearing trademarks.

Do Do That Voodoo Violin

There followed another composer appearing as featured instrumentalist in his own composition, Haitian-American Daniel Bernard Roumain and his Voodoo Violin Concerto No. 1. Roumain satisfied my craving for melodicism more than either of the previous contemporary works, employing a four-bar, bluesy theme that got recalled in several of his concerto’s four movements. The composer proved to be a virtuosic violinist, one inclined at times to feed his own instruments — one standard, the other with two additional bass strings — through distorting electronic effects (to the discomfort of my companion).

The jazzman’s ability to swing established a standard not easily attained by those in the orchestra who were made to solo.

Yet Roumain also conveyed old-fashioned sensibilities, including a sweetness of arrangement and (in a piano solo by Ellen Wassermann) a soulful churchiness evocative of South African pianist Abdullah Ibrahim (aka Dollar Brand). He brought orchestral vaudeville into his third movement, with various sections attempting to echo his showy turns on the violin, much to the amusement of the audience. In the concerto’s final movement, alas, Roumain seemed to lose his grip on both his melodicism and his perfect intonation, in favor of some moody and repetitive channeling of Miles Davis’ anguished approach to fusing jazz and rock. Was this his attempt, as it had been Miles’, to run the voodoo down?

Paula West finished the evening with an odd pairing of song settings, with neither qualifying to be listed as “Jazz Selections.” Gimme a Pigfoot (and a Bottle of Beer) is, strictly speaking, a blues made famous by Bessie Smith. It was the better choice for West, who, like many of the legendary blues belters, didn’t have to be tone-perfect to make things work. Once again, she was admirably supported by Eigsti’s piano, and once again, the orchestra had a bit of a hard time getting into the swing and the funk that this genre demands. Bob Dylan’s Like a Rolling Stone was the selection the most distant from jazz and also from successful adoption by a symphony orchestra. It also failed to make much use of attempted contributions by Eigsti on piano and Roumain on violin, or to showcase West, who had to drop portions of the melody down an octave to match her lower vocal range.