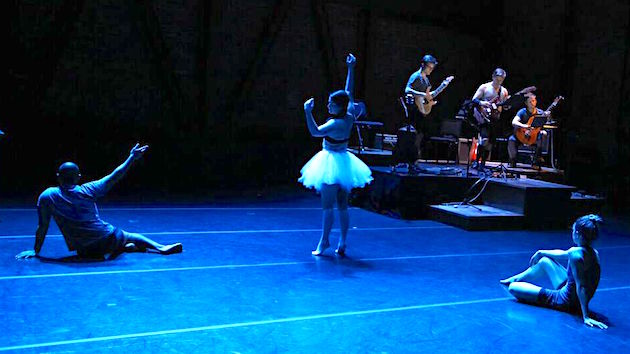 Dramatized drug usage in musical theater is the culprit behind at least two aesthetically terrible things: Jonathan Larsen’s Rent and the one-man show about needle sharing I saw as a ’90s child of the San Francisco Unified School District. But if Prescription Drug Nation sounds like the title of an alarmist school play, in performance, the show — created by composer Aaron Gervais, and choreographed by Michelle Fletcher — is surprisingly nuanced in its approach. 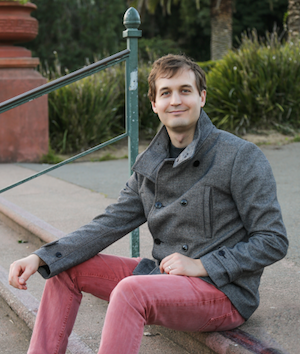 Neither preachy nor voyeuristic, Gervais’s six-part depiction of various drugs aims to validate the experiences of audience members affected by drug usage — as well as to expose them to others’ perspectives. The takeaway, bolstered by the dynamic performance of the Mobius Trio (guitarists Mason Fish, Matthew Holmes-Linder, and Robert Nance), is the sheer variety of drugs and their effects. Movements rarely communicate good or bad; mostly, there are shades of gray (down to the costumes: gender-neutral layers that the three dancers incrementally shed).

The hands are the best part of “Adderall.” Throughout 10 minutes of walking, bending, and crawling, the dancers keep their hands rigid, as if to maximize their aerodynamic function for utmost productivity. Limbs soften in the tiptoeing, classically flavored “Vicodin,” in which Fletcher, wearing a ratty practice tutu with a sports bra, is the star. As flurries of gentle consonances drift by, she appropriates the others’ bodies as partners. Kelly Del Rosario, sitting with his back to the audience, reaches to support her in a modest balance. The beginning and end of the movement find Fletcher curled on a low platform (three, of varying heights, add dimension to the ODC Theater), a passive Degas figure. 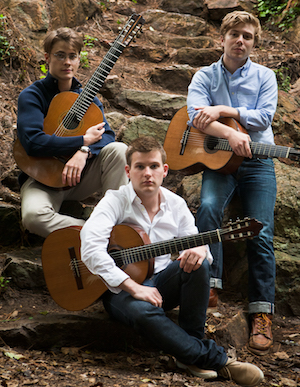 In “Xanax,” no one seems able to function. Del Rosario twists his shirt over his head, and Fletcher lies on the floor, reaching for water — but the main event is Kit McDaniel with her devastating scrunchie. She peers through it, then flexes it with her fingers, and the gaping white fabric seems about to swallow her. Poking through the ruffles, her fingers look like teeth.

Much of Prescription Drug Nation’s score feels rhythmically suspended — but in “Xanax,” distorted long tones on the electric guitar also capture the eerie artificiality of induced emotional detachment. It’s bleak and uncomfortable to watch the characters — who remain in their separate worlds — become undone.

“Prozac (withdrawal)” has the clearest narrative. To amplified clangs, McDaniel falls apart, retching, writhing, and scratching herself; and each time she tries to move into the light, Fletcher and Del Rosario pull her into darkness. In fact, their superior smiles are more threatening than the dragging, which feels obvious. For research, Gervais and Fletcher watched YouTube videos of people using the drugs, and naturally, they picked the most striking physical motions to reinterpret. “I didn’t do a Tylenol movement,” Gervais said.

Though the trio’s slithering across the floor is inspired, choreography sometimes loses its way in “Ambien,” and several movements could benefit from slightly shorter running times. The music, however, is an unusually good dance score. Over several years, Gervais worked out each movement with the Mobius Trio, sans dancers, and it shows: “Adderall” and “Ambien,” in particular, are interesting enough to stand on their own.

It’s sometimes hard to see the advantage of Gervais’s rotation of guitars (in each movement, different combinations of classical, steel-string, and electric), but the three electric instruments are perfect in the exuberant finale, “Viagra.” Initially, unpitched rhythmic strumming recalls Thom Willems; later, the movement grooves. 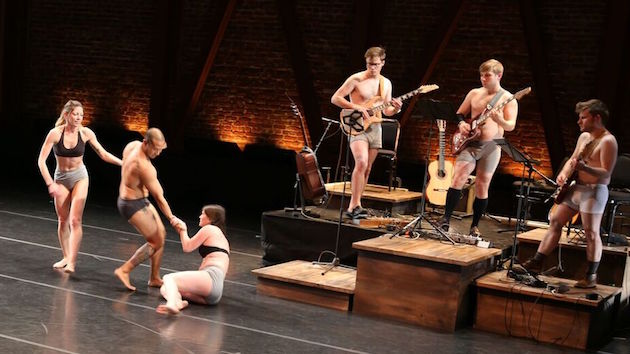 Even the musicians are down to their underwear by this point, and the three dancers fidget in an uneasy configuration. Del Rosario looks expectantly at the women, who rush at him as if to embrace — but McDaniel merely head-butts him, and Fletcher crawls through his legs. Neither seems to want him — until they do, leaping headlong into his arms with speed and power that make fish dives look tame.

It’s all violent and awkward, and at last, the physically less-demanding nature of Del Rosario’s role thus far makes sense. He’s palpably exhausted, but keeps on, gamely receiving each catapulting woman. As the drug peaks, so does he: Grinning, he does a few pushups and lifts McDaniel overheard with great flourish. Even after the women lose interest — as she leaves, Fletcher giving his body an affectionately dismissive pat — he continues to go wild on his own, posing, preening, flexing. “Viagra” is never sexist, and Del Rosario, a ball of energy with boyish charm, makes the scene sidesplitting.