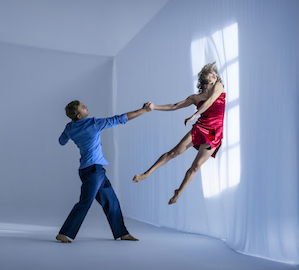 What is it that Brenda Way and KT Nelson, artistic director and co-artistic director respectively of ODC, are trying to tell us — nay, show us — with program A of the company’s current Downtown Dance season? It seems as simple and as complicated, not to mention as eternal, as life itself, and a lot of it has to do with the sexes. As in ... the battle of, the nature of (Way, and a lot of other people, call it “gender identity”), and impossibility of anything at all happening without men and women. It is, obviously, fertile ground for dancemakers. The trick is to grow something new.

KT Nelson’s Cut-Out Guy, from 2012, danced by four men and a woman (last year the cast was all-male), is complemented by Way’s Breathing Underwater, also from last year, with a cast of four women. Way’s Lifesaving Maneuvers, which premiered Saturday night at the Lam Research Theater as part of the company’s 42nd home season, was for all 10 dancers, five of each. You could probably summarize each of the first two dances with one cliché or another about the sexes, writ old or new, or both. Nelson’s Cut-Out Guy embodies, as she wrote in the program note, “fierceness and fragility” that allowed the participation of Vanessa Thiessen without changing either quality. The men were strong yet vulnerable — the dream of your average feminist — and so was Thiessen, fulfilling yet another average feminist dream. 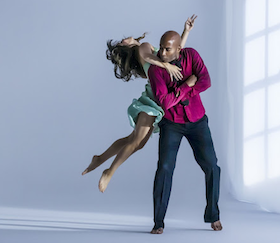 The dancers are a riveting bunch, whether lying on their backs, jittering on their feet, or fearlessly absorbing the weight of the running, leaping Thiessen. She got knocked over and rolled as much as her compatriots, arising no worse for the experience, and she acted as half of a portaging team, conveying one of the guys from one side of the stage to the other. The tender movements and gestures, like a hand pressed to the face to express sensitivity or, sometimes, dubiety, were not unexpected; we’ve seen plenty of this onstage. What is striking with this company is the easily accepting way the men take the I-can-be-gentle stuff onto and into their bodies. The music was by Ben Frost; the backdrop, a nice gray, was lit by Matthew Antaky, and the men dancers were Dennis Adams, Justin Andrews, Jeremy Smith, and Corey Brady.

Breathing Underwater’s stunning beginning has singer/dancer Natasha Adorlee Johnson singing warmly about fate as she moves forward, soft light gradually illuminating more of her body. The dance begins on the floor, as did the previous one; the four women are stretched out lengthwise, and periodically one raises up halfway, with a startled gasp, picked up by a low-hanging mic. It seems a series of rude awakenings, whether floor-bound or, later, vertical, and the sense is that the individual awakenings are taken in as a group experience. It reminded this onlooker of the landmark piece about consciousness raising — each moment of awareness was called a “click” — in the debut issue of Ms. Magazine, even before ODC was founded.

The women are wearing pretty nighties (designed by Way and Lisa Claybaugh) whose stiff-hemmed short skirts often flip up, emphasizing the women’s vulnerability. So do the involutions of the shoulders and the slightly frenetic polka steps, as if the dancers can run but they can’t hide. The music, by Zoë Keating, includes gurgling water toward the end, and something that sounds like a howling wolf. The other dancers, paragons of strength and grace, were Yayoi Kimbara, Thiessen and Anne Zivolich.

Which brings us to Way’s Lifesaving Maneuvers, a delightfully off-center coed extravaganza. Jay Cloidt’s score quotes famous snippets of wartime speeches by Churchill and then-Princess Elizabeth, from Mighty Mouse (whose voice was Way’s father, she writes in a program note), Gordon Gekko, and Eisenhower, and the 1932 Noel Coward song, Mad About the Boy. There are ebullient promenades, the men in good shirts and slacks, the women wearing jewel-toned satin evening gowns and broad smiles, making pert gestures reminiscent of Pina Bausch’s party scenes. Alexander V. Nichols did the lighting and scenic design, Way and Liz Brent the costumes.

And then there’s a nasty moment where a man gently lifts his partner off the floor and drops her flat, with a resounding smack, and unease creeps in. Zivolich solos sexily, legs flashing, her ruby-red dress catching the light. Partnering takes place at warp speed, with the men bravely catching the even braver women, who seem to be strafing them. For contrast and maybe an alternative, there’s Kambara in turquoise, moving extravagantly, navigating alone. We hear water, and sometime in the midst of all this we see couples nuzzling. The last moment, when one of the women sails across the stage, towed on a cape by two men to the song, Mad About the Boy, only adds to the sense of paradox. Are they hers? Is she theirs? Or is she weighing them down?