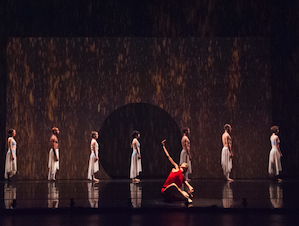 Rarely has your scribe had as much fun at a modern dance show as Thursday at ODC’s Dance Downtown. The company’s opening-night work, boulders and bones, is the second choreographic collaboration between ODC’s Co-Artistic Directors, Brenda Way and KT Nelson. Their first, Triangulating Euclid (2013) is on the other program of the company’s weeklong engagement at Yerba Buena. It may be great, but here’s a free tip: Don’t miss boulders and bones.

Checking in at an hour-plus, it’s a great mixture of dancemaking, music-making, and the visual arts. Andy Goldsworthy, whose crack in the ground in front of the De Young Museum is a memorable illustration of what he does, has done way better with his décor for the new work. It’s “Culvert Cairn,” a hollow made of rocks, with an egg made of rocks resting inside it. RJ Muna documented on video its creation in Marin County — stone and sand, measured and balanced and interlocked, arranged and sweated over by men in hardhats. In other words, not just any old rockpile. As the men on the video sweat, two dancers foreground sit on the floor playing with little sticks, constructing a square as if they’re Lincoln Logs. It will be scattered as the other dancers sweep in — in all, there are nine men and women.

The video has an energy that parallels and inspires the movement on the stage. Photos of the cairn, colored in earthy golds and grays, form the backdrop, stunningly lit by Alexander V. Nichols. At the center in place of the egg, though, is cellist/composer Zoë Keating, inside a frame of curved metal. A large circle on the backdrop suggests the center of an eyeball, or the eye of a storm. Nature passes through this oculus as dancers pass before it; rain or flecks of gold, dust or snow shower down.

Keating records and plays back her music as she makes it, layer upon layer, using a laptop with a foot pedal to create a sound loop that she then accompanies live. From time to time, dancers slowly roll her frame here and there, the better for us to see her as she plays. 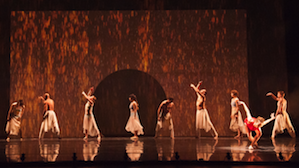 A sense of power and confidence prevails throughout the piece, lending a sense of freedom that spurs investigations of gravity, aggression, and intimacy. As the piece begins, three men carry a caped woman onstage, her arm raised like a goddess. Along with standard falls and recoveries and walks with women draped over men’s shoulders, there are stranger, franker lifts; sometimes, the men trace the women’s pelvises before they put their heads between their partners’ legs. Below their silky white tops, the women wear flesh-colored leotard trunks and tights, as do some of the men; others wear dark pants. They’ll change a few times, and once they’ll all be in long unisex skirts; the costumes, though, are rarely the point.

There’s a moment that feels peculiarly like Sleeping Beauty’s Rose Adagio, as the company (everyone wears soft slippers) poses in a row, one leg lifted in passé, along the front of the stage while dancer Yayoi Kambara moves around and through them. Her weave, like the movement throughout, is supported by Keating’s marvelously inventive and energized cello composition. She draws focus in that cage, but the acuity of the music always redirects our eyes to the dancers.

Key among them is Anne Zivolich, her red leotard spotlighting her moves. She is the embodiment of cool, and her innate composure, balancing fragility and power even when lifted or posed at a strenuous angle by her partner, Dennis Adams, drives the second half of the piece. It accelerates as her deep pliés launch power runs and duckwalk crouches, and the dancers roll lengthwise into the wings, returning for more. True to the title of the dance, Zivolich and her cohorts interlock and separate seamlessly; each sequence is strong yet delicate, and everything feels, looks and sounds new. You can’t really look away, and why would you want to?