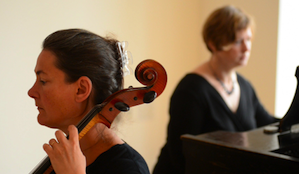 In the 21st century, might we be living in another golden age of classical music? The duo, martha & monica (pianist Hadley McCarroll and cellist Monica Scott) prompted such thoughts, showcasing the musical riches of the turn of the 21st century framed by masterworks from the turn of the 20th and 19th centuries at the Old First Concerts in San Francisco on Sunday.

The concert opened with La Impressione Fiorentino (2004) by Polish composer, Marcin Gumiela. The anxiety-laden work began with a nervous moto perpetuo (perpetual motion) and an extensive use of dramatic diminished chords. While the lyrical second theme provided a short respite, the haunted, mysterious atmosphere maintained throughout evoked a dark street in the medieval section of Florence at night. The resounding end, with an explosive unison on A, was a definitive punctuation to end the trauma.

We were then transported back a century to hear Janáček's Pohádka (Fairy Tales), which were used in the 1988 movie, The Unbearable Lightness of Being. From the hesitant but curious and inquisitive opening, the duo delivered a vivid illustration of the story. The third movement, in particular, was a jovial, festive scene that lifted the spirits. The performance was satisfyingly imaginative and poetic.

Another Polish composer, Wojciech Widłak’s All My Angers (2013), by contrast was a brutal depiction of a clashing storm of vicious anger, filled with a cacophony of bells. The composer utilized microtonality in the slow section, creating an eerie, uncertain atmosphere. Anger and frustrations mounted, and the piece concluded violently, with tone clusters, ultimately arriving at a crashing end with the fallboard of the piano slammed shut.

Tres Danzas Seculares (Three Secular Dances, 1994), by Mexican composer Mario Lavista, were infused with tonal ambiguity and uncertainty. The rhythmic elements indeed implied the dance of imaginary birds. The cello’s ostinato towards the end added to the effect by providing more contrast with the dance.

The concert concluded with an enthusiastic reading of the Beethoven Sonata in A Major, Op.69 (1807). The cello solo introduction at the opening was lush and verdant, and the duo deftly navigated through the intricate weave of the music. The rhythmic tension in the scherzo movement was executed with precision, without letting the heartbeats go astray. The finale brought a satisfying end to the afternoon with gusto and many cheers.

I came away from the concert’s 200-year span awed by the energy and diversity that exists today in the world of classical music. A mere hundred years ago, this musical tradition was geographically limited to parts of Europe and America. Now, it is a global phenomenon with artists from all over the world and a vastly larger audience than 100 years ago, thanks to recording technology. Even in the shadow of mass-produced music, classical music is now accessible to far more people than ever. Hearing a sampling of new compositions makes you grateful for the riches we enjoy today, inspiring us to nurture it for future generations. What will this concert be like in 100 years?