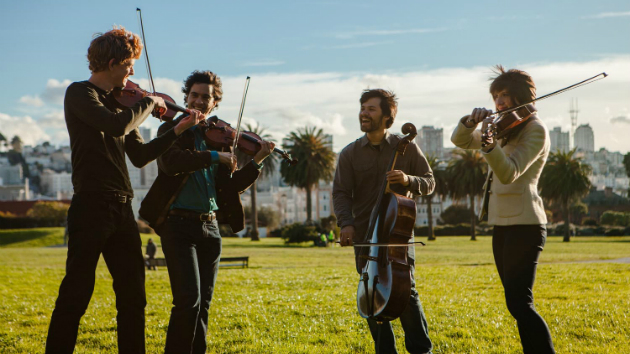 On Friday night the Friction Quartet performed a program of new music at Old First Church. The first two pieces — by Eric Tran and Max Stoffregen, both of the Bay Area — were world premieres. The program concluded with John Adams’ String Quartet (2008), colloquially renamed First Quartet after the St. Lawrence Quartet’s premiere of Second Quartet this past January.

Since their formation in 2011, the Friction Quartet — Otis Harriel and Kevin Rogers, violins; Taija Warbelow, viola; and Doug Machiz, cello — has received attention from all of the Bay Area’s major media outlets. Notably, it was among the 11 artists and groups featured in the 2014 “On the Rise” issue of the San Francisco Bay Guardian. Through both cross-genre collaboration and education, the quartet is committed to expanding the audience of contemporary music. Most impressively, the Friction Quartet has commissioned 30 works (including Stoffregen’s quartet) and given 28 world premieres.

Although Eric Tran composed his String Quartet No. 1 between 2010 and 2013, it could pass as the work of a moderately with-it composer of the 1890s. Actually, his piece is in many ways reminiscent of an even older quartet, Dvořák’s Cypresses: sweet, but not interesting enough to be the main event. And it wasn’t. In particular, the third movement could be a Borodin scherzo but for the unrelenting Glass-ian arpeggio motifs; the last movement, Meditation, is neither passive nor profound enough to leave a strong impression. Most appealing is the second movement, which sounds like a romantic precursor of John Cage’s String Quartet in Four Parts.

Fortunately, violinist Harriel’s gorgeous tone — particularly in the second movement’s cadenza — placated this listener. Throughout the evening he demonstrated his virtuosity with the bow, although his intonation was less consistent than that of Rogers, with whom he alternated as first violin.

The finale — after the Cascade volcanos — is minimalism at its finest. Under Stoffregen’s treatment, the stock chord progression of C Minor seventh to C Major seventh is newly compelling. Toward the end of the movement, the violins tune their D strings down to C, a delightful effect that heightens the resonance of the final passage, built on the C harmonic series. Stoffregen is a composer to watch.

Speaking from the stage, Harriel described Adams’ String Quartet as drawing inspiration from the instrumentation itself, rather than from minimalism or post-minimalism: By the time of its composition, he said, Adams had developed a mature style independent of any school.

Indeed, although both movements of the piece open with quirky ostinato rhythms — a hallmark texture of Adams’ earlier style — the piece quickly moves in other directions. Characters and timbres constantly shift; in several places Adams achieves the maximum sound possible from an unamplified quartet. His deep knowledge of the instruments’ abilities makes this quartet a masterful work.

It seems paradoxical that fine compositions tend to highlight, rather than eclipse, their performers. Yet, the Friction Quartet was at its best while playing the Adams. Although he generally could have used an energy boost, cellist Machiz was perfectly assertive and joyful in his opening pizzicato passage. Rogers excelled, particularly in the sudden shifts to very high positions. In the first movement, violist Warbelow’s solo was velvety and unforgettable, and her vibrato was more nuanced than that of the other players, who consistently favored the narrow and fast. However, her sound often disappeared — can someone invent a quartet seating in which no one is at a disadvantage?

The group only very occasionally (and never in the Adams) had intonation problems, a tremendous accomplishment for any quartet, let alone a young one. And even in the busiest of textures, the quartet remained in control.

The Friction Quartet has marketed itself well. The ensemble specializes in contemporary music, but doesn’t brand itself as a Kronos or an Arditti; in fact, earlier this week the quartet played part of Beethoven’s “Serioso” Quartet in a masterclass. I hope the performance culture of the Bay Area is sufficient to keep them here.