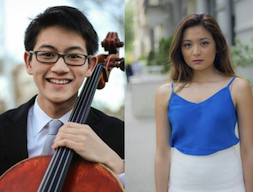 Back for the summer from their studies at Columbia University in New York, Bay Area musicians Nathan Chan and Audrey Vardanega decided to get together, invite Beethoven and Brahms, throw in a bit of Bach and Chopin, and call it a recital.

The reality is, of course, that their performance, Sunday at San Francisco’s Old First Concerts, involved much more planning and preparation than that. Still, Chan and Vardanega presented themselves and their music in such a casual atmosphere that it seemed like a spontaneous gathering.

The relaxed setting was, to some extent, due to the fact that a part of the audience was related to, or otherwise already familiar with, the two young musicians and their work, but primarily it was a result of Chan and Vardanega’s magnetic musical stage presence.

The way in which they apply themselves to their art and to performing in recital demonstrates that both cellist Chan (age 20) and pianist Vardanega (18) possess a musical intelligence and artistic sensitivity that is beyond their years. Even so, the completely natural manifestation of their considerable talents is not related to age or level of maturity at all, but rather is a gift.

Nathan Chan and Audrey Vardanega are both gifted musicians. Chan opened the recital solo, with Bach’s third Cello Suite in C Major, BWV 1009. His tone is nice and dark and resonant in the lower register, and a little more breathy higher up. He is a very physical player, using his entire body to express the music he is playing, and he more or less wrangles his instrument into doing his musical bidding. That was especially apparent in the meditative poetry of the Sarabande, the fourth movement of Bach’s six-part suite, with its free-flowing, barely noticeable rhythm.

Both cellist Chan (age 20) and pianist Vardanega (18) possess a musical intelligence and artistic sensitivity that is beyond their years.

Audrey Vardanega opened the program’s second half with a solo, Chopin’s Polonaise-Fantaisie in A-flat Major, Op. 61, from 1846. As a pianist, her relationship with a-different-instrument-at-every-venue is perhaps less personal, and because of the size of the instrument definitely less physical. Yet somehow she managed to turn the Steinway into an extension of her body, so the music could flow directly from her brain and hands into the hall.

Vardanega’s musical eloquence showed not only in the way she made sense of Chopin’s crazy piece and its loose, improvisational structure, but also in her dialogue with Chan, during the Beethoven and Brahms duets.

Vardanega’s musical eloquence showed not only in the way she made sense of Chopin’s crazy piece and its loose, improvisational structure, but also in her dialogue with Chan.

Physically, their communication was limited to a nod or a glance here and there. One particular moment of supreme musical connection happened in the final movement of Beethoven’s seven Variations on Mozart’s aria “Bei Männern welche Liebe fühlen” (from The Magic Flute); it was very much as if Vardanega and Chan were just chatting away, exchanging ideas, making things up on the spot. It was a great joy to see and hear them play.

The recital ended with Brahms’ second Sonata for cello and piano, Op. 99 (1886). If Chan and Vardanega had played only its second movement, the Adagio Affettuoso, the recital would have been superb. But with the entire sonata, its brilliant fourth movement (Allegro Molto), and an encore in the form of The Swan by Saint-Saëns, it was truly remarkable.