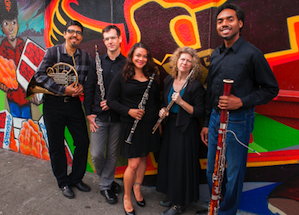 Latino music usually connotes salsa or mariachi, with upbeat violins and trumpets, shakers and cowbells for percussion, and a groove that begs to be danced to with loose hips and shoulders. The Latin American Chamber Music Festival, running last weekend, showed the immense variety and complexity in music by Latino composers. Although there was a hint of the typical Latino music described above, much of the music in Saturday night’s concert at Old First Church was more serious and studious than I expected. I should have paid more attention to the word “Chamber” in the title of the festival.

The concert opened with Quinteto Latino playing the brief Wapango, by Cuban composer Paquito d’Rivera. Huapango is a type of Mexican folk dance that literally means “on wood.” The quick, percussive beats of the dance were dispersed among flute (Diane Grubbe), oboe (Kyle Bruckmann), clarinet (Leslie Tagorda), bassoon (Shawn Jones), and French horn (Armando Castellano). While the melody was chopped up and the harmony relatively dissonant, the dancelike groove was kept intact.

The quintet played without sheet music — something rarely seen at a chamber music concert that should be tried more often. While written music enables much more coordinated complexity, sometimes it is too difficult to memorize when dealing with lots of repertoire in a limited time. But the removal of the music stands totally changes the energy of the experience, both for fellow performers and for the audience.

This contrast between written and improvised music is the main difference between what we call “classical music” and all other musics — the difference between a chamber ensemble and a band. The border between the two seemed very blurry in this concert. The Musical Art Quintet (Sascha Jacobsen, bass; Jory Fankuchen and Anthony Blea, violins; Lewis Patzner, cello; and Charith Premawardhana, viola) does employ music stands but, unlike many classically trained musicians, its members are not afraid to improvise. All the musicians took a turn on a jazz-style solo, each more virtuosic and daring than the next.

All the musicians took a turn on a jazz-style solo, each more virtuosic and daring than the next … These guys are adept at both Mozart and an ad hoc salsa.

Most classical musicians don’t even improvise their own cadenzas, but these guys are adept at both Mozart and an ad hoc salsa. Percussionist Chris Garcia nearly stole the show with his musical antics, beating on the cajon with a bare ankle, slapping cymbals with his hands, sending chipped bits of his mallets flying into the air, and even slapping his own cheeks as a percussion instrument.

The two quintets then combined to form a decet, playing a selection from a ballet called Daughters of the Sand, by bassist Jacobsen. The piece was harmonically rich and deeply orchestrated; the sound yearned for a full orchestral setting. Jacobsen’s arrangement of Ernesto Lecuona’s San Francisco El Grande (originally for piano) also achieved an orchestra-like fullness. Jacobsen is not only a talented arranger and composer; he also stood at the center of the ensemble and quasi-conducted as he danced with his double bass, all while setting a bass line and improvising melodic lines.

Most of the musicians were not Latino — which goes to show how easily music transcends racial and cultural boundaries.

The concert closed with the quite-cerebral Concierto de Camara, by Roberto Sierra. After the first half, the serious piece felt a bit draggy, despite the composer’s best efforts to stay fun with movement titles like “Juegos” (games) and “Danza.” Lifted by forced choppy rhythms and the occasional strains of what could vaguely be recognized as Latino music, it also drifted into what could roughly be recognized as thorny-academic-classical-contemporary-music — a cross-genre-hop to the other direction from earlier in the concert.

This exciting yet also challenging concert was the finale of Armando Castellano and Quinteto Latino’s efforts to reach out to the community and share a genre that lies outside worn-out paths. The organization has spanned the entire Bay Area in its offerings, including concerts in San Jose, four concerts at Old First Church in San Francisco, plus visits to schools in Santa Rosa, Oakland, and Redwood City. Ironically, most of the musicians were not Latino — which goes to show how easily music transcends racial and cultural boundaries.