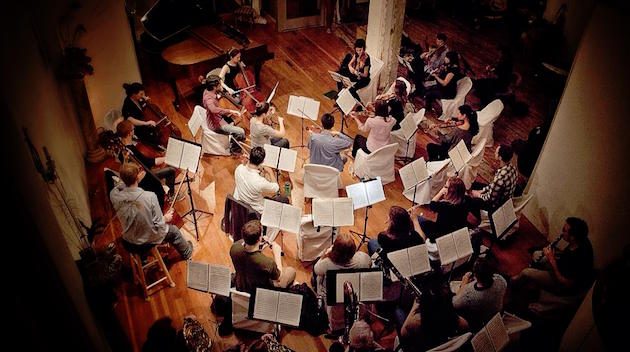 Many new groups purport to “break down the barriers” surrounding classical music, but to “bring it back to its glory days of boisterous audiences” is another matter. What does that mean? One Found Sound’s clarinetist Sarah Bonomo explained, “Audiences in Mozart’s time would throw food if they didn’t like the music. If they did like it, they’d have the performers repeat the first movement three times.” Pieces like the Wind Serenade in C Minor, bassoonist Georgeanne Banker said, would have been performed outdoors, with breaks in between movements for pleasantries and flirtations.

The audience at Old First Church, where One Found Sound performed Mozart’s Wind Serenade along with works by Carl Nielsen and Virgil Thomson on Friday night, refrained from any such antics. But though the concert setting itself was ultimately traditional, the group’s performance was, for the most part, adventurous and unstuffy. 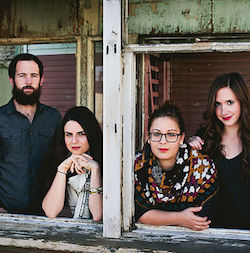 The first movement of Mozart’s Serenade is unconventional in its own right: C minor and its associated sternness of character is hardly typical of light music. One Found Sound highlighted this drama with driving rhythms and crisp articulations, which set up the comparatively sweet and lilting second movement. The Minuet’s syncopated motifs lacked uniform characterization, but the finale’s tight variations passed all too quickly, with first bassoon Georgeanne Banker and second oboe Marcus Phillips making a particularly lovely duet.

In February, Nielsen’s Violin Concerto received its first San Francisco Symphony performance — 104 years after its world premiere. Frankly, it’s no wonder that the work hadn’t been played here before: it’s formally strange, melodically meandering, and fiendishly difficult. For the Wind Quintet, Op. 43, a later work, Nielsen drew inspiration from Mozart’s masterful chamber works, to great effect. This neoclassical piece invents new characters and moods at each phrase’s turn, and it is rightfully one of Nielsen’s most often-performed works.

One Found Sound’s performance was consistently exciting. In the opening Allegro, phrases urged forward, trailed off, and several times, ended rather abruptly — creating refreshing unpredictability within the sonata-form movement. In the Minuet, clarinetist Bonomo shaped the Brahmsian 16th-note passages with expressive elegance, and flutist Sasha Launer and oboist Jesse Barrett, both skilled technicians, made a beautiful duet.

Like Mozart’s Serenade, Nielsen’s Quintet concludes with variations — but only after an intriguing Praeludium that, in Friday’s performance, perfectly balanced spontaneity with pomp. The ensuing variations were distinctly and completely characterized, alternately somber, celebratory, and playful. Oboist Barrett played his solo with easy charm, but clarinetist Bonomo’s utterly wild flourishes stole the show. Georgeanne Banker, bassoon, and Mike Shuldes, horn, rounded out the ensemble.

If Nielsen’s neoclassical composition is quietly interesting, Thomson’s writing in his Sonata da Chiesa (a self-described “bang-up graduation piece” marking the end of his studies with Nadia Boulanger) is delightfully jarring, beginning with its instrumentation — viola, clarinet, horn, trumpet, and trombone.

Indeed, pitting the viola against multiple brass instruments seems unfair. Violist Danny Sheu played the first movement’s solo passages with an uncommonly rich A-string sound, and it was a shame when his subsequent lines were lost to the general din. Luckily, the viola features as prominently in the second movement, a tango, whose sparser scoring allowed Sheu’s lines — charismatically and assertively played — to shine.

The tango’s accompaniment, however, didn’t fare as well. For the trombone (James Thomas Ginn-Encarnación) and horn (Mike Shuldes) Thomson wrote unpredictable, off-kilter rhythmic punctuations, which on Friday sounded too studied to add any value to the melodies. Without sufficient shaping from each of the players, this bizarre tango didn’t come off.

Problems continued into the finale, an ingenious double fugue. Though the players (including clarinetist Bonomo and trumpeter Matthew Ebisuzaki) handled their individual lines with grace, minor rhythmic hiccups, multiplied by five people, resulted in an ensemble that never quite jelled. Sonata da Chiesa is a vibrantly fun and underperformed piece, so it was unfortunate to see the level of ensemble weaken considerably from its heights in the Mozart and Nielsen works.